A Dream Continued in the Mississippi Delta 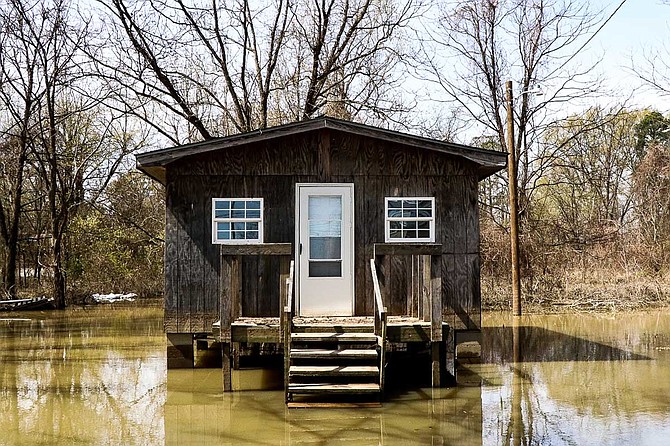 Homes near the Mississippi River Basin in Tchula were completely submerged in late February 2019, and residents are still waiting for water to recede before they return. Photo by Taylor Langele

JACKSON — Dr. William Laurence Lackey III stood in the center aisle of a bus chartered by the Poor People's Campaign just outside of Tchula, Miss., on March 23, 2019. At 6-feet-4-inches tall, he towered over the passengers, singing blues tunes, sharing anecdotes and pointing out relevant historical markers as they appeared along dusty Mississippi Delta roads. Next to the road, brown drainage water kissed the bottom of some mobile homes and completely swallowed those closer to the Mississippi River basin. There are no signs of residents.

"They call places like this 'the bottom,'" Lackey announced more than once.

The truth is, people have been calling the Mississippi Delta "the bottom" for a long time. Democrats from U.S. Attorney General Robert Kennedy in 1967 to, recently, Sen. Elizabeth Warren have visited the Delta to spotlight it as a symbol of systemic poverty that Americans must abolish. Republican Sen. Cindy Hyde-Smith and Gov. Phil Bryant have portrayed their delayed attempts to address recent flooding as outstanding leadership.

To date, however, no political prowess has organized the force necessary to eliminate the region's systemic poverty and economic blight. Some, however, fought harder than others and Lackey, along with several other passengers, have continued their fight into the present.

Lackey is continuing a tradition he started with Martin Luther King Jr. Dubbed "The Poor People's Campaign" by King and the Southern Christian Leadership Conference, the organization's goal was to expose the quality of life, or lack thereof, in the wealthiest nation, holding its first protest in the summer of 1968. After King's assassination, Rev. Ralph Abernathy Jr. then led nine caravans of mule-drawn carts from across the country to Washington, D.C. By the time the "Mule Train" travelers arrived at the National Mall, more than 3,000 people had arrived to assist in a week-long occupation and protest. Now led by Rev. William Barber II of North Carolina, the campaign still fights to represent the interests of the marginalized.

The Poor People's Campaign mobilized the March bus tour to draw attention to flood victims in the Delta and to provide a first-hand account of the systemic poverty that has long choked the region—and the work yet to be done.

'You Have to Do Your Part'

The first stop out of Jackson was the Mileston Cooperative in Tchula, Miss., a historically significant location, dating back to the Great Depression. Today it is also the campaign's designated location for food and emergency supplies. Director of the cooperative Danyelle Holmes told the Jackson Free Press that before the Poor People's Campaign stepped in, there was no regulation to assure that well-meaning volunteers could get supplies to those who need them most.

The cooperative is essentially a cleared-out gas station with impromptu shelves made with the type of cork wall commonly found in tool sheds. After the bus arrived, volunteers filled a cleared space in the four-room station with more than 175 gallons of emergency water. The walls were white on the surface but brown underneath the numerous paint chips that turned the jugs placed in front of them a murky beige. Volunteers shuffled back and forth, trekking through dust as they unloaded each gallon jug.

Outside, local farmer Edmond Park and Tchula resident Francine Jefferson gestured over the community garden that local citizens use for necessities. They share that while the floods are the most pressing present concern of the community, Holmes County has long faced food shortages, which are steadily getting worse, again.

The Mississippi Historical Society reports that, in 1932, President Roosevelt ordered the Agricultural Adjustment Administration to establish policies to raise the price of agricultural goods. In theory, this served to lift most of those in the farming industry out of hunger-inducing poverty. However, in places like the Mississippi Delta, sharecroppers farmed land for credit at town stores that the same landowners owned. Most sharecroppers saw no cash profit from their labor; in fact, most lived their lives in debt.

As a result of increased food prices, many African Americans in the Mississippi Delta had to confront debilitating hunger regularly. The government was slow to correct this problem in 1932. Back then, the solution was the formation of farming cooperatives, the first of which was in Hillhouse, 80 miles north of Mileston.

The historical society notes that The Delta Cooperative eventually made its way to Cruger, just north of Tchula in Holmes County, where it established housing, food supplies, financial support and education for black children who at the time were only provided one-fourth the educational resources that white children received from the state. The Delta Cooperative was one of the few places in pre-civil rights Mississippi where whites and blacks lived, worked and raised their children together.

In 2019, the co-op is a hub for local farmers to donate excess crops to those in need. Jefferson explained that local and personal gardens are the primary resource of food for the region because the supermarket in Lexington, a 20-minute drive north, is overpriced.

"Most people gain food either by way of places like the cooperative or are food sharing with their friends, family or neighbors," she said.

A Flood That Never Dries

In downtown Tchula, a silver sedan sat on a narrow dirt road with back doors flung open like wings. Volunteers moved rippled jugs into the car to deliver supplies to residents whose water supply smelled of sewage and contaminants. Right off the main drag of Tchula, large pools of drainage stood around the base of mobile homes. Flood waters from the Mississippi River drowned the homes earlier that month, and the floods still had not subsided.

Walking down the streets of the mobile-home parks, it was not readily apparent that people are suffering. Children were out playing with their dogs in gravel driveways. Wood porches built on the metal homes gave the structures a sense of stability and permanence. 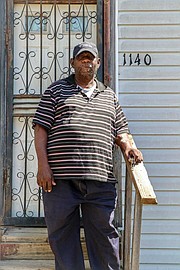 Samuel Callahan says his family was forced out of their home due to food scarcity. The nearest grocery store is a 20-minute drive, and most residents do not own a car. Photo by Taylor Langele

On this street, Samuel Callahan, a Tchula native who recently returned to the area, told the Jackson Free Press that his own home there had not flooded, but the situation still weighed on him heavily.

"When something affects one of us, it affects all of us," Callahan said. "I have family and friends who are out of their homes, who don't have food to eat. I have to give those resources."

When asked where he gets his food, Callahan said the supermarket in Lexington was far too high, so he usually goes to the co-op or grows it himself.

'Four Miles Up the Road'

As the bus approached Marks' city center, Lackey proudly pointed out his county's A-rated Quitman County Elementary and Madison Palmer Middle School, which receive a B-rating from the State of Mississippi.

"If you don't have a good education system, no business will trust you," he said. "That's where we started. We have seen our schools go from an 'F' rating to a 'C' rating overall with one 'A' school and two 'B' schools."

Lackey then recounted the hurdles of finding qualified teachers to work in Quitman County—people who could organize an effective curriculum and work well with parents. High-school graduation rates in Quitman County are 16 percent lower than the state and national average, and 12 percent of the town's residents have a ninth-grade education or lower.

Further north on the journey, the campaign landed in Mound Bayou, where Mayor Eulah Peterson explained her challenges with educational inequity. Mound Bayou was at one time the only self-sufficient African American-run town in the South. It served as an oasis for black people and others who wanted to escape the harsh racial codes that bound the rest of the state. Emmett Till's mother found refuge in this town when she came from Chicago to give testimony regarding her son's murder. Now, the mayor says the county has shut them out of their school system.

"They closed the school and sent our kids four miles down the road," Peterson said. "We are a town of career educators, and the school system was the largest employer in the town. They said they would turn the old high school into a vocational school to attract businesses; now the county office has moved in, and the alternative school relocated there. Now we're looking at charter options."

In August 2018, Peterson helped lead a boycott with JFK United, a local group opposing the merger of John F. Kennedy Memorial High School in Mound Bayou with Broad Street High School in Shelby, the Bolivar Commercial reported. Peterson convinced most of Mound Bayou parents to withhold their children from school rather than sending them to a school outside the town. Without a school, there are hardly any jobs for the residents of Mound Bayou, but charter options come with their risks as well.

On the lawn where the 1968 "Mule Train" began, Lackey explained that while African Americans have done well politically in the town, they haven't seen the same growth in educational and economic development, which are so interrelated that they must be the starting point for the Delta. Lackey says most of the advice he gets from state officials revolves around turning Marks into a tourist hub. "So when people from Oxford and Ole Miss come here and catch a train, we're going to make sure they see pretty things," Lackey said.

A Call for Moral Revival

Despite the local effort to keep these historical communities afloat, the Delta is far from thriving. The Poor People's Campaign decided it was vital to bring awareness of that need to the Mississippi Legislature on March 25, 2019. In front of the Capitol steps in Jackson, a collection of Mississippians presented a set of "demands" to lawmakers that work to "give every citizen of our state a good shake and a fair deal."

A modest podium sat within throwing distance from the Capitol steps. Advocates like Kathleen Chapman came to speak about the inability of the state to adequately provide and facilitate a safe life for its disabled citizens. Chief among her complaints was an inefficient public-transit system and the continual budget cuts that seem to affect extended Medicaid and Medicare programs the most.

Unfortunately, there were only around 30 people to hear Francine Jefferson as she stepped to the platform to invoke Isaiah 58:1, where the prophet shouts "like a trumpet" to expose the iniquities of the nation. She then began her proclamation: "So-called leaders, Christians, Americans and Mississippians alike, I will cry aloud and spare not, and lift my voice like a trumpet and show the leaders and Mississippians their transgressions. This is the wealthiest nation on the planet. It is wrong. Do not be silent. Tell them that this is wrong."