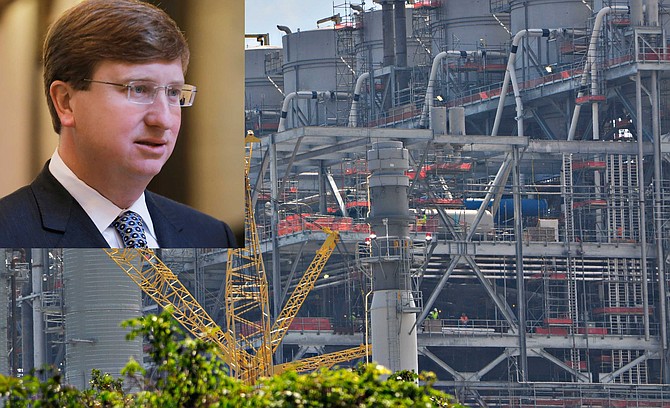 Mississippi Lt. Gov. Tate Reeves, a Republican candidate for governor this year, helped push through a $1 billion bond to fund construction of the Kemper plant in 2013. File Photos by Imani Khayyam and Trip Burns

Mississippi Power's gambit to build a first-of-its kind "clean coal" plant in one of the poorest counties in Mississippi failed, but not before state ratepayers helped finance its construction to the tune of billions with the permission of state leaders, including Lt. Gov. Tate Reeves.

Southern Company, which owns Mississippi Power, eventually abandoned the Obama-administration-backed project in 2017. By then, it had run over its completion deadline for three years, and the construction costs had ballooned from an initial $2.4-billion estimate to $7.5 billion.

"It was the biggest boondoggle in the history of Mississippi," Sierra Club President Louie Miller, whose group opposed the plant from the start, told the Jackson Free Press on June 18.

In August 2012, Reeves, who is a Republican candidate for governor this year, expressed skepticism about the idea that power company customers should pay more in monthly bills to finance the construction of the plant in Kemper County.

"I think that the general notion that (electricity customers) are financing this facility is not the ideal way in which to do it," Reeves told the Biloxi Sun Herald on Aug. 15, 2012.

Just six months later, though, he helped push through a piece of legislation that put ratepayers on the hook for an extra $1 billion in construction costs for the plant.

Already in 2010, the Mississippi Public Service Commission, or MPSC, allowed Mississippi Power to charge ratepayers for up to $2.8 billion in construction costs. By 2013, though, the project was running well above the company's initial estimates, and even the MPSC advised Reeves against allowing a second round of rate hikes. But Reeves, who as lieutenant governor also serves as president of the Mississippi Senate, used his power in the Legislature to pass House Bill 1134. That granted Mississippi Power the extra $1 billion through bonds paid ultimately by its customers.

Between the time Reeves criticized the idea of another rate hike and the bill's passage, though, Mississippi Power's political action committee had donated $2,000 to his campaign. They made that donation in September 2012, just a month after he cast doubt on allowing a new rate increase. On the same day as the PAC donation, Reeves also received $250 from Frances Turnage, the company's chief financial officer and treasurer.

In the years since Reeves led the state Senate in passing the $1 billion bond, the Mississippi Power PAC, as well as the company's leaders and lobbyists, have donated at least $27,000 to the lieutenant governor's campaign committee, including $4,500 within a year of him flipping to support the rate increase. Those donations are part of a $7 million war chest he amassed in the years leading up to his current run for governor.

Mississippi Power's donations do not surprise Miller, who said he thinks the power company and its leaders would use their money to exert pressure on lawmakers. He called it a "pay-to-play kind of company."

The Jackson Free Press reached out to the Reeves campaign's communications team and to Mississippi Power PAC earlier this week for comment, but did not hear back.

While the Mississippi Power PAC devoted significant sums to Reeves, the secretary of state's website identifies only a single donation to Jim Hood, his likely Democratic rival this November, since the last statewide elections in 2015. That $1,000 donation from September 2017 pales in comparison to the $12,000 the PAC donated to Reeves over the same period. Hood was an early opponent of the Kemper project. In 2009, he filed a motion to challenge its application with the Public Service Commission.

By 2014, ratepayers in southeast Mississippi had seen their power bills rise by 18% to fund the Kemper plant's construction, the Hattiesburg American reported at the time, and Mississippi Power was looking for another 4% increase to pay for the bonds.

The University of Southern Mississippi in Hattiesburg raised tuition on its students by $236 a semester to offset the increased power costs. Although the plant did create jobs, retired USM economics professor Mark Klinedinst told the New York Times in 2016, the higher electricity costs meant that even more jobs were lost, with businesses cutting employees to pay the higher rates.

The plant, which promised to pioneer a climate-friendly process for mining and converting coal to energy, was heavily promoted by the administration of then-President Barack Obama, who considered clean coal plants like the one in Kemper a key prong in its plan to fight climate change. By the time Southern Company ended dreams of "clean coal" at the Kemper plant in 2017, it had only produced electricity from coal for about 100 hours, despite years of delays and billions in cost overruns.

Mississippi Power could not have passed construction costs on to taxpayers, though, without a bill the Legislature passed and former Gov. Haley Barbour signed into law years earlier.

"At the end of the day, there was a tremendous amount of political influence that was exerted by Mississippi Power to get to where they were in order to break ground on this thing," Miller said.

In 2008, Barbour, a Republican, led the charge to pass the very legislation that allowed Southern Company to pass costs for the Kemper Plant onto Mississippi ratepayers before the plant's completion.

That law, known as the Baseload Act, happened after lobbying from Southern Company and the business-friendly American Legislative Exchange Council, or ALEC. To this day, ALEC has a strong foothold in the State Legislature, and works behind the scenes to help conservative lawmakers craft bills favorable to the business interests that back the organization.

Before Mississippi voters elected him in 2003, Barbour represented Southern Company through his lobbying firm, BGR Group. As governor in 2008, he helped transfer $270 million in federal funds from a cancelled coal project in Florida to Mississippi to help with the startup costs for what would become the Kemper plant.

"If President Obama or Gov. Barbour like this plant so much, let them come up with a way to pay for it," he told the Jackson Free Press at the time.

In May of this year, the U.S. Department of Justice opened a civil investigation into the Kemper plant's failures related to how it plans to dispose of property at the $7.5 billion plant.