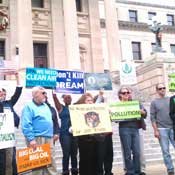 Residents near a planned 582-megawatt coal plant protested the project that threatens to raise their electric rates by 45 percent.

In all the pages of court records regarding a dispute between environmentalists and an electric utility company--pages that one Mississippi Supreme Court justice characterized as the most voluminous he has seen in his eight years on the court--one important piece of information eluded the justices.

What changed between April and May for the Mississippi Public Service Commission to reverse itself and allow Mississippi Power Co. jack up the cap on a 582-megawatt Kemper County coal plant by $480 million dollars?

"So far I don't find anything in the commission's order itself--and haven't yet found in the record--what it is that would help me understand that the commission is justified in making this factual conclusion that the risks are now balanced," presiding Justice Jess H. Dickinson said last week.

Brandon Presley, the PSC's northern district commissioner, has an idea. Presley voted against fellow commissioners Lynn Posey and Leonard Bentz, of the central and southern district respectively, on the cap increase.

"The only thing I saw change was letters came in from Barack Obama's energy secretary and Haley Barbour," Presley said.

Last summer, Energy Secretary Steven Chu and Gov. Barbour wrote letters asking Presley to reconsider his opposition to Mississippi Power raising the price tag of the plant, which is now under construction. Presley balked at the idea, calling the project a bad deal for consumers.

"If President Obama or Governor Barbour like this plant so much, let them come up with a way to pay for it," he told the Jackson Free Press last week.

Presley, along with consumer and environmental advocacy groups, has fought to oppose the plant, albeit for slightly different reasons at times.

"I have no problem whatsoever with clean coal technology," Presley said. "I have a problem with asking the people of Mississippi to be guinea pigs."

The Sierra Club opposes the 582-megawatt plant because it is slated to use experimental internal gasification combined technology to burn low-grade lignite coal. As the basis for its lawsuit against Mississippi Power and the PSC, the suit before the Mississippi Supreme Court, the Sierra Club also argued that the commission failed in its obligation to publicly explain its rationale for the reversal.

On April 29, 2010, Commissioners Posey and Bentz issued a decision limiting the ratepayer cost of the plant to $2.4 billion. Mississippi Power stockholders of Company would have to pick up any costs above $2.4 billion, they said at the time.

The Atlanta-based utility complained that it should be able to pass any additional costs down to the ratepayers, and warned that it could not afford to build the plant if not allowed to pass on all the costs, including those above $2.4 billion.

Less than one month later, the commission revised its decision May 26, allowing the company to charge ratepayers up to $2.88 billion for the plant. Mississippi Power did not publicly release the amount of the rate increase customers would shoulder as a result.

After being pressed by justices at the hearing, Sierra Club attorney Robert Wiygul said he obtained confidential information showing that ratepayers' energy bills could rise as much as 45 percent.

Since the hearing, the justices are reviewing the remainder of the court documents and could bring the parties back to clarify some points before the three-judge panel or the full nine-member court. From there, they can remand the issue back to the PSC for review or strike provisions of the deal.

PSC Commissioners Posey and Bentz did not return calls by press time.