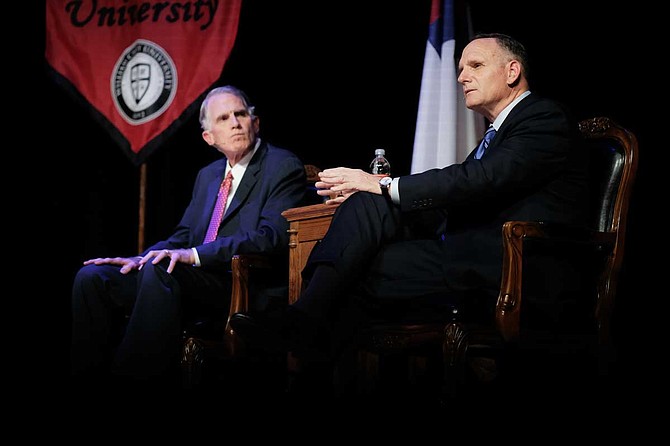 One night in the summer of 2012, Karen Taggart stood on the second step of the stairs so she could hug her 6-foot, 7-inch son, Brad, goodnight. The lanky 21-year-old had returned home from the University of Mississippi to live with his parents in Madison so he could enroll in summer classes at Mississippi College instead. But when his mother returned home the next morning, she found her curly-haired boy dead from a self-inflicted gunshot wound.

Her husband and Brad's father,  attorney Andy Taggart, was on a business trip in Chicago when his wife called with the devastating news. As he rushed back to Mississippi, he called his friends back home with a plea.

Hours after Brad's mother discovered his body, her other son, Drew, found a handwritten note his brother had left.

"I hate that I'm putting you through this," Brad wrote. "I've lost my mind due to drugs. I have no emotions, I can't be happy ever, and I'm empty inside. Drugs have robbed me of my memory and knowledge that I've gained. ... I have no hope."

His family knew he had felt overwhelmed while he was in Oxford, but had no idea that he had been struggling with drug addiction.

In his run for the Republican nomination to become Mississippi's next attorney general, Andy Taggart is drawing from that experience to make fighting the proliferation of illicit drugs and rehabilitating addicts his No. 1 issue. He calls it a "crusade."

"The chief law-enforcement official of the state ought to be focusing the resources of his or her office on what I believe to be the greatest danger to the entire state: that would be the scourge of drugs," Taggart said at a candidates' debate at William  Carey University in Hattiesburg on June 5.

The Mississippi attorney general's toolkit allows him or her to affect state drug laws in several ways, including regulatory and prosecutorial options. Current Attorney General Jim Hood, for example, filed a lawsuit against three of the nation's largest opioid distributors last year,  alleging they flooded the market with too many pills. The attorney general's office also has an appointee on the state Board of Nursing, where they can influence prescription and drug dispensing practices.

The position also affords the opportunity to work with state and local law enforcement on dealing with cases involving drug trafficking and prosecutions. State attorneys general often use their clout to go to the Mississippi Legislature and push for changes and updates to a variety of laws.

Taggart and his wife's experience, he told the debate audience on June 5, gave them "steely-eyed" determination to fight drug crime.

"If we are candid with one another, folks, it is the poison that is causing every single family in every single one of our communities to be at risk in some way or another," Taggart said.

Taggart criticized current Attorney General Jim Hood, who is running for the Democratic nomination for governor, for not "configuring the resources" necessary to fight substance abuse. Taggart's main concern is not just opioids, but with illicit drugs like the ones his son struggled with, like cocaine, LSD and ecstasy, he said.

"We need to focus our resources on dealing with that issue, acknowledging the difference between predators on the one hand and victims on the other—figuring out ways to redeem, rehabilitate and restore victims back to contributing members of our community, and nailing the predators to the wall," Taggart said.

Taggart said he would use his power as attorney general to find strategies to help reduce drug abuse.

At the June 5 debate, Mississippi Rep. Mark Baker of Brandon, who is also running for the Republican nomination, said it would take more than just working with local law enforcement.

"We have got to lead this office back to lawyering, back to protecting the public interest. Back to working with law enforcement," he said. "Mr. Taggart talked about the scourge of drugs. The opioid crisis will not be fixed until we can get the departments in federal, state and local agencies (to work together), and the attorney general has got to lead the way."

The other Republican candidate for attorney general, current Treasurer Lynn Fitch, also promises to fight drugs in the state and to be "tough and smart on crime." Like everyone except Taggart, her focus is on prescription drugs.

"I will fight the opioid crisis in Mississippi," Fitch's platform on her website reads. "This affects everyone across gender, race, age and income lines, and I will bring together all interested parties to fight every angle of this epidemic."

In the Legislature, Baker has backed several bills in recent years that relate  directly to drug crimes.

This past legislative session, he introduced House Bill 1104, which would have brought a controversial practice back to the state that allows law enforcement, often with no court oversight at all, to seize property that they believe a suspect used or gained in the commission of a drug-related offense.

Baker did support the Criminal Justice Reform Act, which the Legislature passed and Gov. Phil Bryant signed into office. Among other changes aimed at reducing incarceration, it reforms the state's drug courts. Under the umbrella of "intervention courts," it allows for a more targeted approach to specific needs, with some organized as mental-health courts.

During the June debate, Baker laid out his vision in other areas, too. He criticized Hood for his history of prosecuting corporations. Hood's record includes lawsuits against utility Entergy for overbilling customers, and Navient  Corporation, which doled out student loans that the attorney general said they knew could never be paid back.

"CEOs don't come where they aren't wanted," Baker told the June 5 debate audience, suggesting he would limit the number and kinds of lawsuits against corporations.

On her website, Fitch promises to "protect all Mississippians from unfair and deceptive practices," without naming specifics. But she also vows to be a "business friendly" attorney general.

"I will apply a business-friendly model to our work, streamlining rules and regulations to engage businesses as partners in meeting people's needs," her website reads.

In the June debate, Baker spoke out against Hood's hiring out outside counsel, or private lawyers, to take on big cases. That practice has been roundly criticized by business interests; in the 1990s, tobacco companies are still paying Mississippi millions every year thanks to a successful lawsuit then-Attorney General Mike Moore launched in the 1990s with the help of private counsel.

In the Legislature, Baker has tried to unsuccessfully to pass legislation that would make it harder for an attorney general to use outside counsel. Fitch, Collins and Taggart have all expressed an openness to continuing the practice.