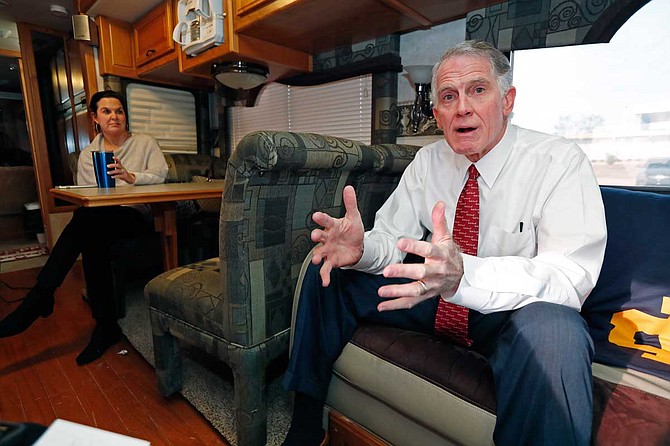 He and his wife, Karen, have spoken publicly about one their three sons, Brad Taggart, who struggled with drug problems before taking own life as a young adult.

"Karen and I have spent the last six and a half years trying to find the most effective ways to redeem the loss in our own lives and have come to the conclusion that this really is the right way to do it," Taggart said about his campaign to become the state's top legal officer.

"Trying to encourage policymakers in Mississippi to refocus on the manner in which we grapple with the drug war, which I believe to be the greatest earthly danger to young people in our state, is the right leadership role for me to take on at this stage of my life and career," he said.

Bryant has been governor since 2012 and appointed Taggart to be co-chairman of a committee that recommended improvements in the Mississippi prison system after a longtime commissioner of corrections, Christopher Epps, was imprisoned in a corruption scandal.

Taggart has served four years in elected office, as a Madison County supervisor from 2004 to 2008. He faces state Rep. Mark Baker of Brandon and Treasurer Lynn Fitch of Ridgeland in the Aug. 6 Republican primary for attorney general. If a runoff is needed, it will be Aug. 27.

The Republican nominee will advance to the Nov. 5 general election to face Democrat Jennifer Riley Collins of Clinton. She is a retired U.S. Army colonel and the current executive director of the American Civil Liberties Union of Mississippi.

"Although I have no beef with the current attorney general, I'm not running against him. I do disagree with the priorities of his office," Taggart said, pointing to Hood's focus on prosecuting online crimes.

"That's a crime, and there are plenty of victims of it," Taggart said. "But it's not the scourge on our society that drugs represent. Virtually every family that would be candid would acknowledge that in some way they've been touched by substance abuse. And in my mind the priorities of this state's top law enforcement officer, which is the A.G., ought to be focused on fighting that fight."