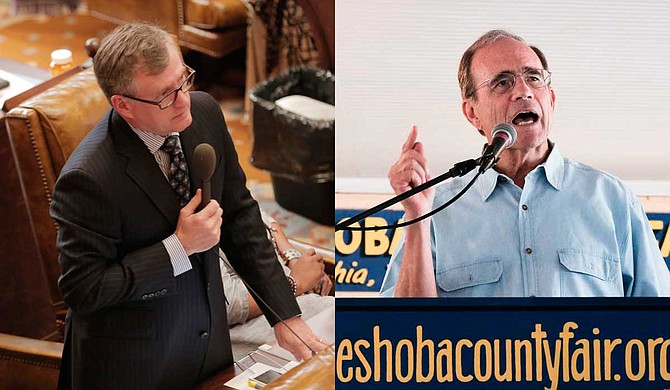 JACKSON — One of Mississippi Secretary of State Delbert Hosemann's potential opponents is calling on him to resign his office while he runs for lieutenant governor.

"One of the most important pillars of our state government is a fair and trusted election process where there is non-biased supervision of the entire process," Rep. Jay Hughes, D-Lafayette, said in a press release Thursday. Hughes is running in the Democratic primary for lieutenant governor.

As secretary of state, Hosemann, a Republican, is responsible for training local-level election workers who administer elections and for overseeing campaign finance and lobbying activities. Now that Hosemann is running, that could raise questions, Hughes said.

"This is no different than getting to be judge and jury in your own trial," he said.

Assistant Secretary of State of Communications Leah Rupp Smith, a spokesperson for Hosemann's office, told the Jackson Free Press that, unlike other states, the secretary of state does not administer elections in Mississippi.

"The Secretary of State's office conducts training for local election officials—circuit clerks, election commissioners, and party executive committees—who run elections in Mississippi," she said. "Our office does not run or administer elections, or have any authority related to voter roll maintenance. Election commissioners and circuits clerks are elected by voters."

Hughes demanded that Hosemann resign his elected position in a letter dated Jan. 10.

"In the 2019 elections, popular confidence could be undermined because you will be overseeing the election in which you are a candidate for one of the highest offices in the state," Hughes wrote after congratulating Hosemann for entering the race. "This conflict, on its face, is contrary to the most fundamental principles of elections—that an independent and impartial election authority manages the electoral process."

"In light of these facts and genuine issues," Hughes continued, "I most respectfully urge you to immediately resign as Secretary of State and hand over the responsibility of overseeing the elections in 2019 to a completely neutral authority."

At a campaign stop in Hattiesburg Thursday afternoon, Hosemann dismissed the demands, telling members of the press that the letter showed Hughes did not understand how the process works. He reiterated that secretaries of state in Mississippi do not directly administer elections.

In his press release, though, Hughes suggested Hosemann could be in charge of electoral "disputes and irregularities" if any arise.

That is not true, Hosemann said. Under Mississippi law, Attorney General Jim Hood, a Democrat who is running for governor, would be responsible for handling any potential disputes or irregularities that arise—including in his own race for governor.

An Oct. 30 press release from Hosemann's office ahead of November's midterm elections noted how disputes are dealt with.

"Problems at the polls observed by State observers or otherwise reported to the Elections Division will be referred to the proper authorities, including county Election Commissioners, the Attorney General's Office, or the appropriate District Attorney's Office," the release reads. "The Secretary of State's Office has no enforcement authority to resolve problems."

Hosemann's predecessor, Democrat Eric Clark, did not run for re-election in 2007, nor did he seek higher office. Voters elected Hosemann in 2008.

The last time a Mississippi secretary of state ran for higher office while serving was in 1995, when Dick Molpus ran as the Democratic nominee for governor. He did not resign the office, lost the race to Republican incumbent Kirk Fordice and served until his term ended in January 1996.

Last year's governor's race in Georgia, though, could serve as a cautionary tale. Georgia Secretary of State Brian Kemp, a Republican, refused to resign his seat. He faced accusations of suppressing votes, purposefully purging black voters from the rolls and blocking black registrations and abusing his powers to influence the election.

Kemp was running against former Georgia House Democratic leader Stacey Abrams. She grew up in Mississippi and would have been the first black woman in the country elected governor. Kemp ignored calls to resign from newspapers across the state, the NAACP and even from former President Jimmy Carter, who is from Georgia.

Past Georgia secretaries of state made an effort to avoid accusations of inappropriate conduct while running for higher office, Atlanta Magazine pointed out in November. When she ran for the Republican nomination for governor in 2010, then-Georgia Secretary of State Karen Handel resigned. When she ran for governor as a Democrat in 2006, former Georgia Secretary of State Cathy Cox did not step down, but she did recuse herself from overseeing the election and appointed a replacement to "avoid the appearance of a conflict of interest."

In his letter, Hughes also criticized Hosemann for spending "public dollars during his time in office promoting his name and likeness through email, [I]nternet, radio, television, and even in polling places."

One example Hughes pointed to was a sticker Hosemann sent out several years ago with Hosemann's name on it and the words, "VOTE in honor of a VETERAN." Hosemann, himself, is a veteran.

However, "Vote in Honor of a Veteran" is a program that began under Clark, Hosemann's Democratic predecessor. In a 2007 television ad, Clark, surrounded by children and veterans, looked into the camera and touted his role in creating it.

"During my 12 years as your secretary of state, I've been shown again that our freedom as Americans, including the right to vote, has been secured again and again by the sacrifices of our men and women in uniform," Clark said, urging voters to wear a stick to the polls "in honor of a veteran."

Under Hosemann, Smith said, the program "has been carried on by this Agency sporadically over the years."