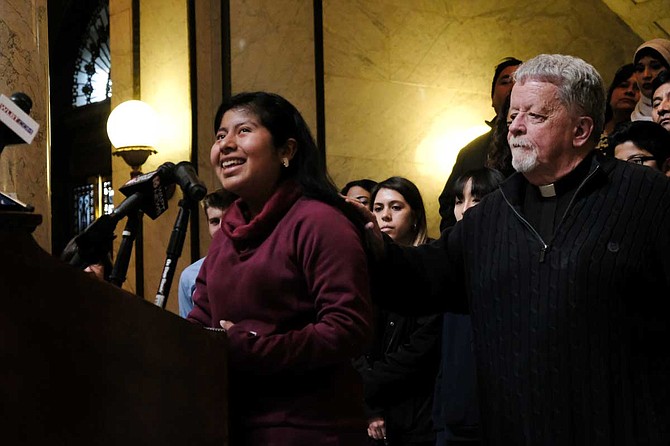 Mississippi Immigrants Rights Alliance Board of Directors member Father Jerry Tobin puts his hands on Yitzel, a young immigrant, as she sobbed from behind a podium in the Mississippi Capitol on Jan. 30. "I had to grow up really fast," she said. Photo by Ashton Pittman.

JACKSON — Yitzel abruptly stopped speaking as she sobbed from behind a podium in the Mississippi Capitol on Wednesday. Mississippi Immigrants Rights Alliance Board of Directors member Father Jerry Tobin put his hand on her shoulder.

Yitzel, a member of MIRA, was thanking the group and its supporters for helping her and her mother, Teresa, in their fight for an easier life for undocumented immigrants living in Mississippi. For people like them, she said, it is often difficult to get a job, and even when they do, they cannot get medical insurance through their work.

The complex web of laws immigrants have to navigate just to hold employment "makes it a big issue to us, because when the parent gets in trouble, who brings the money to the house?" Yitzel said. "They look up to us, the teenagers, to bring the money. We need to take our time, we need to work, we need to bring the money. We're becoming adults in the youth time, and this is a sad moment for us."

The mother and daughter duo, whose last names MIRA declined to provide, were among multiple members and supporters of MIRA holding a rally to urge lawmakers to pass legislation to make life better for the state's documented and undocumented immigrants.

Knowing that she spent much of her childhood fighting immigration hurdles "actually hurts a lot," Yitzel said. "Because then, when we grow up, we think about, I never had a time to be a youth, because I had to grow up really fast."

Choking back tears, she pleaded for a better future for the next generation of teenage immigrants.

"Hopefully with your help, we can make this community and this country better again," she said. "For future kids and future teenagers so they don't have to suffer all of this."

Moments after Yitzel spoke, her mother told the crowd about a change to Mississippi law that could improve their lives.

Even though Mississippi requires proof of citizenship to obtain a driver's' license, it also requires a "Non-U.S. Citizen Driver License" demarcation on immigrants' licenses.

Lorena Quiroz told the pro-immigrant crowd in the Mississippi Capitol that "too many have fallen for political fear mongering."

Rep. Kathy Sykes, D-Jackson, introduced House Bill 403 to make it easier for immigrants to obtain a driver's license by revising those requirements and creating a certificate for driving. Lawmakers on the House Transportation Committee have yet to schedule a vote, but MIRA representatives met with lawmakers after the rally to urge passage.

Some opponents argue that granting undocumented immigrants driver's licenses will make the roads less safe, but after California passed a law allowing driver's licenses for undocumented immigrants, the number of collisions did not change. The number of hit-and-runs, however, dropped, a study following that state's implementation of the law in 2015 found.

Other speakers at the MIRA rally spoke more broadly about immigration, seeking to tear down myths politicians perpetrate by using anti-immigrant rhetoric to fuel their campaigns.

"The South remains the poorest region in the nation," she said. "Of the 100 poorest counties in America, 74 of them are located in the South. Sixty percent of the African American population resides in the south, and Latinos are the largest growing immigrant population. The Latino population contributes to the economic growth of this state. They accounted for 3.5 percent of all self-employed Mississippi residents in 2015 and generated $107.3 million in business income.

Watson pointed to an American Immigration Council report for insight "on the impact of immigrants both documented and undocumented."

The AIC is a Washington, D.C.-based nonprofit that advocates for the rights of documented and undocumented immigrants,.

Watson pointed to Jackson as an example of positive changes immigrants can bring to communities.

"Unfortunately, Jackson, Mississippi has an inordinate number of vacant, boarded-up homes, scattered throughout the city," Watson said. "A number of these homes have been purchased, repaired, renovated and are occupied by immigrants."

'Too Many Have Fallen for Political Fear Mongering'

Repeatedly, speakers condemned the Trump administration's policies, such as his proposed wall along the U.S.-Mexico border.

"He is using the wall as a bargaining tool for temporary concessions for DACA, Dreamers, and temporary protected status extensions," MIRA Legal Project Director Patricia Ice said. "This really amounts to blackmail. There's no emergency at the border. Failure to obtain the funding that only 45 and his white supremacist base want for a wall, by definition, does not give rise to a national emergency."

Saurabh Sharma pushed back against Trump's repeated assertions that immigrants bring crime and terrorism to the country.

"Many, if not the vast majority of the undocumented people, come to this country for the same reason other immigrants came: They come for economic reasons and because they were facing persecution and other dangers," he said.

"If you lived in a country where you could not feed or educate your family, you would seek refuge elsewhere. If you and your children were at risk of dearth, abuse, rape, or forced inscription into a gang, you would seek refuge elsewhere. The people coming from Central American countries such as El Salvador, Guatemala, and Honduras face dangers every day from forces that are in place or remain in place directly or indirectly from the past and continued policies and actions of this government."

America's own actions in South America, he said, helped set the stage for the influx of families seeking asylum.

"The corruption, drug and gang warfare that presently exist in these countries stems from the U.S. government's long-term intervention in the affairs of these countries," Sharma said. "The people have the right to apply for asylum in America, but No. 45 has created the false narrative about the rights of the asylum seekers and obligations of this country towards them under the current immigration laws."

Sharma is not alone in that assertion. In a 2017 article for The Nation, Economic Policy Institute founder Jeff Faux argued that U.S. policy "created the immigration crisis" with "support for oligarchs" and "the War on Drugs."

"For at least 150 years, the United States has intervened with arms, political pressure, and foreign aid in order to protect the business and military elites of these countries who have prospered by impoverishing their people," Faux wrote.

"The current administration has stoked the flames of fears and division between Americans and undocumented immigrants," she said. "People of color have seen this before, but too many have fallen for political fear mongering."

At the Mississippi Capitol, Aemal Nafis accused President Trump of "hypocrisy" when it comes to immigration.

"The facts are that No. 45 was married to two immigrants," she claimed. "The last is alleged to have worked in the country when she was not allowed to. Melania Knauss first arrived on a tourist visa which expired while she was here. She was 'illegal,' as Trump would describe her, for a period of time in the United States, and although her skills were that of a model, she was later allowed to obtain a so-called 'Einstein Visa.' Those visas are given to immigrants with 'extraordinary ability' and 'sustained national and international acclaim.' She obtained the visa while she was dating Donald Trump and married him and eventually became a U.S. citizen."

MIRA Lobbied Lawmakers to Support Some Bills, Oppose Others

MIRA representatives met with lawmakers after the rally to support bills in the Legislature that could improve life for Mississippi immigrants.

Those bills include House Bill 545, which would repeal the Mississippi Employment Protection Act, a 2008 law that felonizes immigrants caught working in the state without authorization, with penalties of up to $10,000 and possibly years in prison. A competing bill by Sen. Chris McDaniel, R-Ellisville, would instead increase penalties and enforcement of the 11-year-old law.

Sykes also introduced House Bill 404, which would prohibit employers from asking for criminal-background information on an employment form, and House Bill 422, which would allow undocumented students in Mississippi to pay in-state tuition rates to attend college.

MIRA urged support for House Bill 530. That bill, introduced by Rep. Tom Miles, D-Forest, would increase funding to schools where English-language learners comprise 20 percent or more of the student body.

Miles introduced other bills MIRA supports including House Bill 515, which requires waivers for districts where 25 percent enrolled are English language learners, and House Bill 89, which would create an English Language Scholarship Program.

MIRA lobbied legislators to oppose other bills that are less friendly to immigrants.

Senate Bill 2015 would make it a felony for employers to hire undocumented workers on a temporary basis "in order to skirt immigration laws." A person charged could face up to five years in prison and $10,000 fines if that bill, introduced by Sen. Angela Burkes Hill, R-Picayune, passes.

She also introduced Senate Bill 2464, which would require Mississippians registering to vote to provide documentation proving their citizenship. MIRA hopes to stop both bills from advancing out of committee.

Another piece of legislation, Senate Bill 2095, would authorize the state's attorney general to seek reimbursement from the federal government "for all costs of illegal immigration incurred by the state." The bill's language, citing estimates from the Legislature, claims that the state spends about $106 million each year dealing with issues related to undocumented immigration.

That bill, introduced by Sen. Michael Watson, R-Pascagoula, and all other bills included here are not scheduled for a vote, yet.

Watson also introduced Senate Bill 2094, which would impose penalties on sponsor organizations, such as Catholic Charities and other church organizations, that are involved in refugee resettlement in Mississippi.

"They're trying to block any kind of refugee resettlement in Mississippi, period," Chandler told the Jackson Free Press Friday morning. "That's what he's trying to do. It's an attack on Catholic Charities."

CORRECTION: In the photo and introductory paragraph to this story, the Jackson Free Press incorrectly identified the person who put his hand on immigrant Yitzel's shoulder during a rally at the capitol as MIRA Executive Director Bill Chandler. The person was actually Father Jerry Tobin, a member of MIRA's board of directors. The Jackson Free Press apologizes for this error.