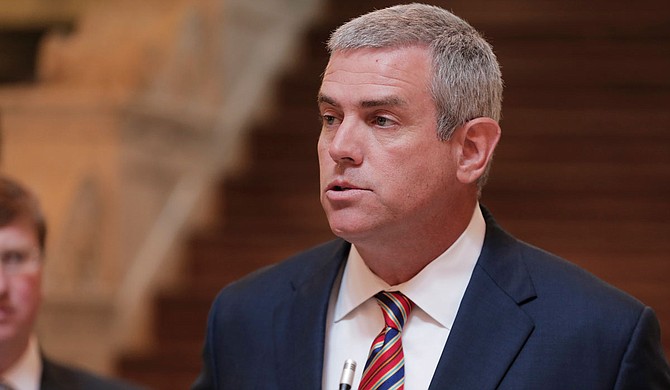 Mississippi House Speaker Philip Gunn, R-Miss., will be the national board chairman for the American Legislative Exchange Council. Courtesy web.

When Mississippi Speaker of the House Philip Gunn resumes his leadership at the Legislature in 2020, he will also be serving as the new national chairman of the American Legislative Exchange Council, an organization that pushes corporate-friendly and anti-public-education legislation in state houses across the nation. The right-wing billionaire Koch family, an assortment of lobbyists, corporations and wealthy donors fund ALEC.

Gunn's elevation in the group comes just days after The Center for Constitutional Rights, a progressive organization, released a report claiming that ALEC has pushed legislation that furthers white supremacy and corporate power in right-leaning states.

Since Republicans took control of the Mississippi House and named Gunn speaker in 2012, the Legislature has passed numerous bills into law that were written in whole or in part in ALEC's backrooms. Former Jackson Free Press state reporter Arielle Dreher reported in 2016 that those bills included ending Mississippi's tax on out-of-state corporations and the voucher program that uses public education funds for private-school tuition.

ALEC churns out "model legislation" that conservative lawmakers in states across the country can introduce in their respective states by simply "filling in the blanks" with their state's name and a few other details. Though ALEC heavily influences policy at state houses, it is not officially registered as a lobbying organization. Instead, ALEC is registered as a 501(c)(3) nonprofit charity organization, which means it is not supposed to engage in "substantial" lobbying under the U.S. tax code.

The organization named Gunn as its new national chairman at its 2019 States & Nation Policy Summit in Scottsdale, Ariz. Gunn has been on ALEC's board for years and was its first vice chairman until his promotion on Dec. 5.

Dozens of Mississippi legislators are members of ALEC. Across the country, ALEC often holds secret meetings with legislators seated alongside corporate leaders, where they write bills that frequently end up becoming law in states across the country.

In its report out this month, the Center for Constitutional Rights cites a host of ALEC laws that it says have a "deadly impact on Black and Brown lives." The report specifically cites ALEC's promotion of "Stand Your Ground" laws, which supporters of George Zimmerman used to defend his shooting of unarmed teenager Trayvon Martin in Florida in 2012.

The report also points to its efforts to push voter ID laws, like the one Mississippi voters implemented in 2011, and "anti-protest" laws, like the "anti-BDS" bill Mississippi's governor signed into law earlier this year to prohibit State contractors from participating in boycotts of Israel's treatment of Palestinians.

"ALEC brings together conservative legislators and corporate lobbyists to develop and disseminate model legislation that sustains corporate power and white supremacy, which has ensured ALEC has become one of the most powerful, and least known, platforms of its kind in U.S. politics today," the report claims.

But ALEC CEO Lisa B. Nelson described its mission a little differently in a Dec. 4 press statement announcing the summit's start.

"ALEC and its members advance individual liberty and free enterprise in the states--connecting people with opportunity and getting government out of the way," she said. "As our members prepare for the next legislative session, they come to ALEC to exchange and test ideas."

ALEC kicked off the summit on Wednesday by hosting a dinner with the Alliance Defending Freedom, a far-right organization that, like ALEC, shops model legislation to states around the country, but with an emphasis on passing theocratic laws targeting women's rights and LGBT rights.

ADF, which the Southern Poverty Law Center defines as an anti-LGBT hate group, has defended efforts to sterilize transgender people in European countries and supports attempts to recriminalize homosexuality in the U.S. and across the world. In recent years, that organization has been behind "religious liberty" bills in states across the country.

In 2016, the Jackson Free Press reported that ADF worked with Mississippi leaders, including Gov. Phil Bryant, to craft HB 1523, and then later helped him defend it.3. That so-called "religious liberty" law allows business owners to refuse to serve LGBT people in certain instances if they invoke a "deeply held" religious belief about marriage or gender identity.

Judge Charles Pickering was a long-serving board member of Alliance Defending Freedom.

Though ALEC claims its emphasis is on economic issues, the group has been a member of ADF since at least 2018. ALEC's evangelical roots run deep. Its founder, Paul Weyrich, was an evangelical Christian who once led efforts against pornography and for school prayer.

Weyrich developed a close friendship with Republican Mississippi Congressman Trent Lott (later a powerful senator), who helped him found the "Conservative Lunch Club of Capitol Hill," where he and fellow believers plotted a new kind of conservatism.

"We are different from previous generations of conservatives. We are no longer working to preserve the status quo. We are radicals, working to overturn the present power structure of the country," The New Republic reported him telling a group of Republicans in 1973.

In the decades since, ALEC has helped push a number of controversial policies, like "Right to Work" laws that undermine union strength, and "three strikes" laws that led U.S. incarceration rates to skyrocket, while proving to be a boon for the private prison industry.

Publicly, ALEC has advocated for some modest criminal-justice reform bills in recent years, including some that Mississippi legislators passed and Gov. Bryant signed into law.

In other instances, ALEC has pushed for laws meant to maximize corporate profits and lower their costs by cutting regulations (like environmental ones). ALEC has repeatedly pushed laws intended to dilute public-worker unions. ALEC was a key proponent of "Right to Work" legislation, which eroded workers' protections in states across the country, including Mississippi, under the guise of boosting workers' rights.

In 2016, when Mississippi's conservative lawmakers were working to pass the ALEC-backed corporate franchise tax cut, they brought economist Nicole Kaeding in as an "expert" witness. She works for the Tax Foundation which, like ALEC, is heavily bankrolled by the Koch family.

Kaeding said the tax cuts would be good because she considers corporate taxes the "most harmful for growth," the Sun Herald reported in 2016. She admitted that those tax cuts would not pay for themselves, though. Mississippi lawmakers ought to supplement corporate tax cuts, she said, by increasing "consumption taxes." She specifically recommended that legislators ought to increase the gas tax, eliminate sales tax holidays, and charge taxes on services provided by doctors and lawyers.

The Sun Herald reported that Gunn "applauded" Kaeding's testimony, saying she had "confirmed and affirmed many of the decisions we've made." So far, the Legislature has not implemented those recommendations.

In some of its official education material, the IRS defines the kinds of service taxes Kaeding recommended as "regressive taxes," because "such a tax causes lower-income groups to pay a greater proportion of their income than higher-income groups pay."

ALEC did not respond to requests for comment for this story on Friday morning.

In a Dec. 4 press release, ALEC's outgoing national chairman, South Carolina Rep. Alan Clemons, described the organization as "a wellspring of learning of, by and for legislators,"

"Our constituents deserve the best ideas to increase opportunity, and, as legislators, it is incumbent upon each of us to seek ongoing education so that we may better serve our communities," he said.

But last year, Democratic Georgia Sen. Nan Orrock, a former ALEC member, told an 11Alive investigative reporting team in Atlanta that ALEC is nothing more than "a corporate bill mill" run by "a group of angry white men controlled by industry, not legislators."

"They're cranking out legislation and putting it in the hands of legislators to go back and file it," Nann said in that 2018 interview. "There are votes taken that have the corporate folks at the same table voting with the legislators on which bills to pick. And that at its core just screams out, 'inappropriate.'"