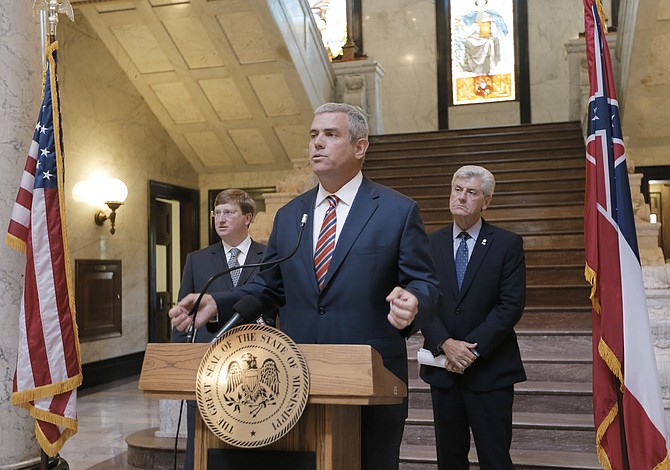 A "fairer, flatter tax code" is the goal for Republicans who are leading the tax-policy panel, made up of the most powerful politicians in the statehouse. The group has started its self-assessment of Mississippi's tax structure and is soliciting opinions from outside the state as well.

On Sept. 1, an economist from the conservative-leaning Washington D.C.-based Tax Foundation gave the panel ideas on how to make the state's tax code fairer and flatter. Lawmakers listened to Nicole Kaeding's presentation and then peppered her with questions as she laid out possible reforms for Mississippi lawmakers to take in order to create a less-volatile and more stable tax structure.

Lt. Gov. Tate Reeves said lawmakers were also interested in hearing from Mississippians about their thoughts on the state's tax code.

"I believe that our goal should be to make Mississippi the most attractive place in America to invest capital and to create more and better and higher-paying jobs," Reeves told the panel. He provided an email address ([email protected]) for Mississippians interested in providing input.

Kaeding said the Tax Foundation looks at a state's tax rates, collections, burdens and structure. She said all four factors are important and must not be evaluated in isolation. On a scale from "most harmful to least harmful," she said the corporate income tax is the most harmful, while a property tax is considered the least harmful for a tax structure's volatility.

"Corporate profits, which is what you're taxing with a corporate income tax are subject to a great deal of variability," she told lawmakers last week.

The Tax Foundation also favors business input exemptions in sales taxes. Mississippi ranks 20th on its 2016 State Business Tax Climate Index, which was published before the Taxpayer Pay Raise Act of 2016 became law this July. That bill phases out not only the state's corporate franchise tax but also some of the lower individual income-tax brackets.

Both Reeves and House Speaker Philip Gunn, R-Clinton, asked Kaeding how eliminating the corporate franchise tax would help eliminate volatility in the state's revenue collections. "If you're looking to reduce volatility, reducing your reliance on something like the corporate income tax can go a long way," she said.

The Hope Policy Institute points out that the corporate franchise tax, which is based on the capital of the corporation that does business in the state, also has made up a significant part of the state's revenue in the past five years. The franchise tax has made up about 44 percent of the state's revenue collections over the past five years, a Hope policy brief says. Eliminating individual income tax brackets will put the most money back into the pockets of the state's wealthiest taxpayers, Department of Revenue data show.

Beyond being good to big businesses, Kaeding suggested that the State look for additional revenue by broadening its sales-tax base. Currently, Mississippi does not tax some items that other states do, like pharmaceuticals or services. Kaeding said the majority of the economy revolved around the sale of goods when the sales tax was created in the 1930s, but now two-thirds of the economy is service-based.

Currently, Mississippi does not charge a sales tax on pharmaceuticals or gasoline (there is a separate gas tax, but no additional sales tax on gas in the state).

Taxing services could mean a number of things, from taxing law firms to taxing gym memberships, as Washington, D.C., recently did to broaden its tax base. She said opponents called it a "yoga tax."

"By not taxing services, you're making your sales tax less productive, meaning your rate is higher than other states," she said.

Kaeding cited a few states that had recently implemented what she called successful tax reform packages, including North Carolina. That state recently cut its individual income tax and corporate tax, while broadening their sales tax. In order to implement these cuts, they took an $800-million cut to the state coffers. Kaeding said this isn't the only way to cut taxes, however.

"Cutting revenue should not be the only thing that's considered; again tax triggers tend to be helpful," she told lawmakers. "You can do good tax reform without slashing revenue."

Critics of the Taxpayer Pay Raise Act said that the bill did just that—cut taxes and put a big hole in the state's revenue.

Both Reeves and Gunn stressed that the state was not like Kansas, which Kaeding said is struggling to predict revenues even from month-to-month. The difference between Kansas and Mississippi lies in how the tax breaks were and are implemented. Kaeding told lawmakers that Kansas is an example of "what not to do" because the state passed a bill that cut individual income taxes for half the incomes without passing the "base broadening" bill that would have raised sales taxes to balance out the cut. The cut was set to take effect immediately, leading to the intense volatility in the state's tax structure.

Mississippi's cut will be phased in over 12 years and was passed with no "base broadening" bill.

Kaeding said several states are looking at phase-ins—and that they work when states have appropriate benchmarks and a baseline to build on. Groups like the Hope Policy Institute and several Democrats during the session pointed out that even phasing in tax cuts was likely not a wise choice due to the State of Mississippi's shaky coffers.

Those tax cuts also could come at a high cost. "The high cost of big tax cuts may require Mississippi to raise revenue in the future through higher sales and property taxes, both of which hit lower and middle income earners hard," the Hope Policy Institute stated in its 2015 policy brief. "The end result will be worsening schools and roads and a tax shift away from the wealthy and onto lower and middle income families."

"Overall, Mississippi is in a good place, your tax structure is strong, you're doing a number of things very well," she said. "But I do think that a package of reforms can help Mississippi's competitiveness."

Whether or not state lawmakers will seriously consider adding sales taxes remains to be seen.