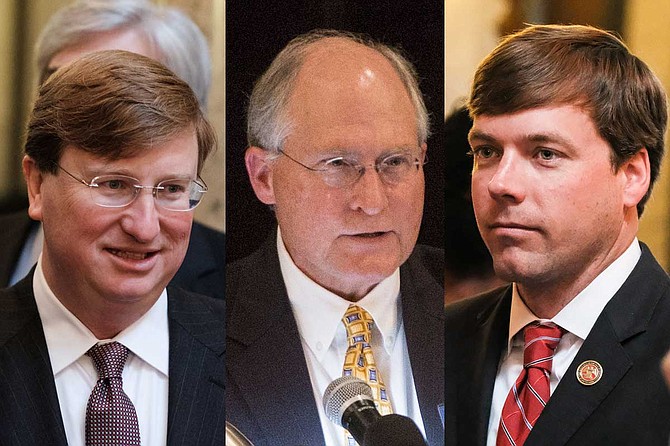 JACKSON — Mississippi Lt. Gov. Tate Reeves, a Republican candidate for governor, will be a no-show at the party's first primary debate on Tuesday night.

The hosts said they invited Reeves' campaign and tried to find a date that would work for him, but he cited scheduling conflicts.

"We understand that Lt. Gov. Reeves has a very busy schedule," MSU College Republicans chairman Adam Sabes said in a press release on March 15. "We have done everything in our power to schedule an event that he would be able to attend."

On Friday, though, Reeves' duties as lieutenant governor lessened, as the state Legislature wrapped up its 2019 session more than a week earlier than it had planned. Originally, the session was not supposed to end until April 7.

The Jackson Free Press reached out to Reeves' office for comment on Monday but had not heard back at press time.

In a Facebook post on Sunday, Foster, whose district includes parts of DeSoto County in north Mississippi, goaded Reeves.

"I am very much looking forward to Tuesday's debate at Mississippi State University," he wrote. "With legislative session now over, even Tate Reeves can attend. Going to be an incredible evening and a good opportunity for Mississippians to educate themselves on who will be their next CEO."

Foster, a conservative state legislator, has controversial tweeting habits. After U.S. Sen. Chris Murphy tweeted that "nobody needs an AR-15 to hunt" last month, Foster quote-tweeted him with his own thoughts.

"Actually, patriots DO need an AR-15 to defend the Constitution, our homes, and to serve as a last check and balance in our Republic from Socialist Liberals," Foster wrote, invoking tropes that right-wing groups like the Tea Party commonly use.

In a January interview with the Jackson Free Press, Foster discussed his thoughts on the issues and explained why he uses Twitter to attack the other side the way he does.

"They attack me, and they attack things that I believe in, and yeah, I give it back a little bit sometimes, and that's uncommon for most politicians," he said. "A lot of times, politicians ignore it completely and don't fight back. I can talk policy with anybody, and I'm friends with people that are liberal, conservative and everything in between. I'm just a nice guy and get along with people. But you know, if they don't want to step in the ring, don't step in the ring."

Foster has diverged with the right wing of his party on other issues, though, including with his push for a higher teacher pay raise than the $1,500 one legislators approved last month and his skepticism about private school vouchers.

Last week, Reeves and the GOP leadership slipped $2 million for private-school vouchers into a must-pass funding bill, angering legislators in both parties who had already rejected the idea of expanding the state's voucher program.

"Lack of transparency is a big part of our senate leadership's failure, and sneaking voucher money into a bill in a backroom deal with no debate is the exact kind of special interest cronyism I am running against," Foster tweeted on March 29.

In recent years, Republican frontrunners have often declined to debate their opponents, especially ones in their own party. Last year, a secret recording captured Republican U.S. Sen. Cindy Hyde-Smith saying she did not want to debate State Sen. Chris McDaniel, R-Ellisville, because it would give him free publicity.

"I love debates," she can be heard telling an unidentified woman in the video. "But right now, my opponent does not have enough money to get on TV, and my guys are saying that's like handing him a $200,000 donation because he's way down in the polls, and he's wanting the TV shot."

She did later debate her Democratic opponent, former U.S. Secretary of Agriculture Mike Espy, but only after pushing for limited press access and securing the right to bring a substantial amount of notes to the podium with her. In the race for Mississippi's third congressional district U.S. House seat last year, Republican-nominee Michael Guest refused to debate his Republican primary runoff opponent, Whit Hughes. After securing his party's nomination, he then refused to debate the Democratic nominee, State Rep. Michael Ted Evans, D-Preston. Guest won the November election in a blowout.