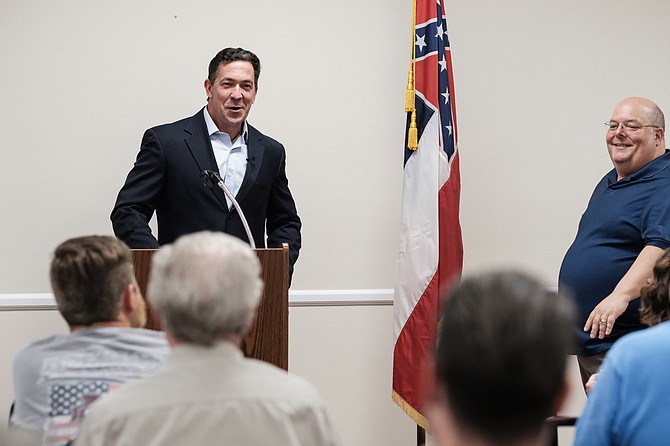 PETAL, Miss.—"Contrary to what you might hear about me, I do not have horns on my head," Republican U.S. Senate candidate Chris McDaniel told a crowd gathered to listen and ask questions in Petal, Miss., on Aug. 30. "There's no tail, there's no pitchfork."

It was the kickoff event for the Ellisville state senator's "Contact With Mississippi" tour with supporters holding signs designed to look like the Confederate-imagery-laden state flag with the words "Chris Country." The self-styled Reagan conservative spoke more in shades of Donald Trump, delivering right-wing salvos that aimed his ire not just at Democrats, but at "fat cats," corporate special interests and the leaders of his own party.

"Who controls both branches? Who's in the White House?" McDaniel asked the audience; "Republicans" and "Trump," they replied.

"Then why is Obamacare still the law of the land?" he continued, referring to a near-universal campaign promise Republicans have made to repeal the law each election season since President Obama signed the Affordable Care Act into law in 2010.

Aiming for Republicans on Immigration

McDaniel called Democrats "a dangerous adversary," but saved most of his fire for Republicans whom he accused of betraying conservatism not only on healthcare, but by supporting what he considers lax immigration laws. Republicans support such laws, he claimed, in service to "the richest of the rich" and "multinational corporations" that "want to drive down wages which hurts regular Americans" because "big corporations want cheap labor."

A 2017 analysis by the National Academies of Sciences, Engineering, and Medicine found "little evidence that immigration significantly affects the overall employment levels of native-born workers."

At times, hints of independent Vermont U.S. Sen. Bernie Sanders' rhetoric on corporate power and politics bled through. Speaking to the Jackson Free Press after the event, McDaniel admitted feeling a kinship with Sanders' diagnoses of a corrupt system. That kinship, he added, falls apart as soon as Sanders starts proposing left-wing ideas to remedy it.

Veering from Reagan on Trade

Although McDaniel told the audience he would not be in politics if not for Ronald Reagan—who drew him to conservatism as a teenager—his anti-corporatist rhetoric marked a notable departure from the 1980s icon of big business-friendly conservatism.

Reagan was a friend of the U.S. Chamber of Commerce and delivered several keynote speeches at its forums throughout his presidency. Like the chamber, Reagan advocated for free-trade policies with other nations around the globe and opposed tariffs like the ones President Trump levied against China, Mexico and Canada earlier this year.

"We should beware of the demagogues who are ready to declare a trade war against our friends, weakening our economy, our national security, and the entire free world, all while cynically waving the American flag," Reagan said in a 1988 radio address the Chamber highlighted on its website last November.

McDaniel concurred with Reagan's views on trade as recently as the 2016 Republican primary, when he called Trump a "liberal" for his trade positions. In an Aug. 29 press release, however, McDaniel endorsed not only Trump's tariffs, but his opposition to the North American Free Trade Agreement and his efforts to renegotiate it.

Reagan called NAFTA "an investment in America's future" in a 1993 op-ed, but in his press release, McDaniel attacked his Republican opponent, incumbent U.S. Sen. Cindy Hyde-Smith, for praising NAFTA as "positive" and "vital." Hyde-Smith made those comments in February, more than a month before Mississippi Gov. Phil Bryant appointed her to the U.S. Senate seat of Sen. Thad Cochran after he retired in March due to ill health.

McDaniel attributed the power of the Chamber—which overwhelmingly donates to Republicans rather than Democrats—to Trump's decision to endorse establishment Republicans at the behest of Republican U.S. Senate Majority Leader Mitch McConnell.

McDaniel implied that Hyde-Smith, whom Trump endorsed via tweet in August, is among those 'RINOs'—short for "Republican In Name Only."

"He endorsed me three times in 2014," McDaniel said, referring to Trump's Twitter endorsements of him in 2014 when he challenged Cochran for the same seat. "And it's funny, because I'm the same politician now I was then."

Trump, McDaniel said, "called me some really nice things and I appreciate it."

"Here's the way I look at it: He's endorsed me three times and her only once," McDaniel added.

Hyde-Smith continued to loom large throughout the question-and-answer section. She is a U.S. senator "because our corrupt governor went along with it," one man interjected, as McDaniel claimed Hyde-Smith was picked at McConnell's orders as "someone they could control."

"I hope you win, because I'd much rather see your face than Cindy's," one woman said.

He appeared caught off guard when one participant asked him if he voted for Hyde-Smith when she was the Republican nominee as Mississippi's commissioner of agriculture and commerce in 2011 and 2015.

"I have no idea, I have no idea," McDaniel said. "I can promise you this: Had that position been a policy position, there's not a chance I would've voted for her. That was a regulatory position."

The moment echoed another earlier in the campaign when Hyde-Smith, who was a Democrat before she switched parties in 2010, could not recall for whom she voted in the 2008 Democratic primary, but insisted it was neither Sen. Barack Obama or Sen. Hillary Clinton.

"It was probably a no-name, but I still can't remember who the no-name was," Hyde-Smith told a reporter in June.

That contradicted a 2014 statement by McDaniel's then-campaign spokesman, Keith Plunkett. "Over a decade ago, Chris McDaniel voted in a Democratic primary in order to have a choice in local competitive elections," Plunkett told Talking Points Memo. "However, as the attacks from Democratic politicians have made clear, McDaniel's conservative Republican record in the Senate speaks for itself."

"U.S. Senate candidate Chris McDaniel was caught lying Thursday night about voting in the Democratic primary in 2003," Hyde-Smith's campaign wrote in a press release the day after the town hall.

"With an ever-changing story about his voting history and convenient lapses of memory, clearly, Mississippians can't trust Chris McDaniel to be a United States Senator," Hyde-Smith communications director Melissa Scallan said. "Last night's town hall was just another strange example of the McDaniel campaign's disregard for the truth."

McDaniel started the town-hall tour, he said, to offer his "employers"—the residents of the state—an opportunity to ask any question they liked, "even if it's hateful or mean."

"There's a reason I stand here after I'm done and take questions," McDaniel said. "So many politicians come into a room and rush out of the room as quickly as they can after it's over. That's not what an employee does. And I am your employee. If I can't stand here and answer your questions, I should no longer be your employee."

"Call me," McDaniel said. "I put my cellphone on social media."  McDaniel gestured to a camera broadcasting his speech live on social media and read out his number: 601-580-5833. "Text me," he said. "I'll answer any questions you've got. I owe that to you."

Republican Petal Mayor Hal Marx, whom McDaniel described as "a wonderful mayor and a conservative champion," introduced him at the town hall.

"The establishment can lie and cheat all they want, but at the end of the day, we're sending Chris McDaniel to Washington as our next United States senator," Marx said. He is running for governor of Mississippi next year.

"If you haven't seen his Twitter feed, you're going to see a conservative every single time," McDaniel said.

Days later on Sep. 2, Marx sparred on Twitter with a user who posted a photo of McDaniel with him and his 16-year-old son. The photo showed Marx's son wearing a yellow t-shirt based on the Gadsden flag with a snake and the phrase "Don't Tread On Me." Under that was the word "Charlottesville," referring to the historic Virginia college town where white supremacists rampaged in 2017, leaving one woman dead. The Gadsden flag was among flags the marchers carried along with the Confederate flag, the Mississippi flag and the flag of the Third Reich.

The flag's designer, Christopher Gadsden, was a revolutionary war hero, as well as a slave owner and slave trader, with 100,000 slaves believed to have passed through Gadsden Wharf between 1783 and 1808 off the coast of Sullivan's Island near Charleston, S.C. "The shirt was a dog whistle to McDaniel's base (and yours as well!)," the user, @nicki21n, tweeted at Marx. "If you didn't want to promote racist propaganda, you shouldn't have let your child wear it to a photo op with a political candidate."

"My son doesn't have a racist bone in his body," Marx tweeted back, calling the original poster a "looney leftist."

His son purchased the shirt, Marx explained to another tweeter, when he visited Thomas Jefferson's home in Charlottesville on a school trip in May, although the gift store does not seem to sell the shirt.

"His shirt had nothing to do with racism, but your ignorance of history is telling," Marx wrote. "Leave my son out of your discussions. He's a kid."

McDaniel faces off against Hyde-Smith and Democratic U.S. Senate nominee Mike Espy—who served as U.S. Secretary of Agriculture under President Bill Clinton—in a special election ton the same day as the national midterm elections on Nov. 6, 2018. Polls are open from 7 a.m. to 7 p.m. in Mississippi.