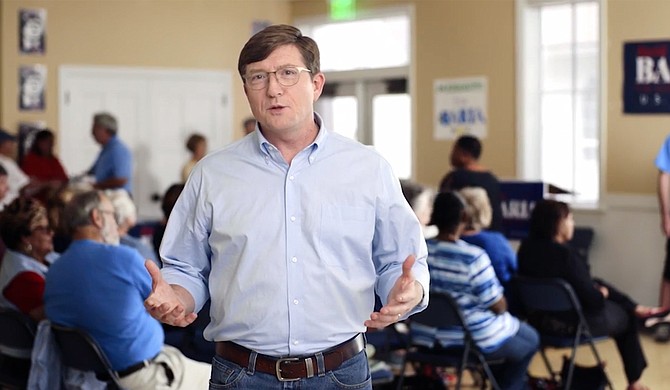 In the 30-second ad, which is set to begin airing on local stations across Mississippi on a date to be announced, Baria seeks to make it clear that his campaign is against the incumbent Republican senator—not the president.

"I'm running for the Senate against Roger Wicker, not Donald Trump," Baria says, standing in a room of supporters. "I'll support the president when he's helping our state, like rebuilding our crumbling infrastructure, but I'll oppose the president if he's hurting Mississippi, like starting a trade war that's costing our shipyards and farmers."

In the 30-second ad, which is set to begin airing on local stations across Mississippi on a date to be announced, Baria seeks to make it clear that his campaign is against the incumbent Republican senator—not the president.

Earlier this year, Trump implemented tariffs on Chinese aluminum and steel. China hit back with tariffs on American agricultural products like soybeans, the third-largest agricultural commodity in Mississippi behind poultry and forestry.

"Mississippi farmers don't deserve the damage caused by tariffs, and taxpayers shouldn't have to foot the bill," Baria said in a statement in July.

In an interview with the Daily Journal in September, Wicker said he was "very concerned" about the tariffs, but that Mississippi farmers are willing to give Trump some leeway.

A Washington Post analysis found that farmers across the country, particularly in the Midwest, could face harm from NAFTA renegotiations, as buyers look to other nations to purchase products like soybeans.

Since Trump came into office, the political world has speculated that Republicans and Democrats could unite behind him to pass an infrastructure package. So far, though, that hasn't happened.

In a Fox News interview Thursday morning, Trump suggested infrastructure is "something that can bring us together" if Democrats win control of the U.S. House of Representatives from Republicans in November's elections. On FiveThirtyEight, political data analyst Nate Silver gives Democrats about an 80-percent chance. Republicans have dominated the lower chamber since 2011.

Silver's expectations for the Senate are the opposite; he gives Republicans an 80-percent chance of retaining control of the upper chamber, due in large part to the fact that more vulnerable incumbent Democrats than Republicans are up for re-election this year. Silver only gives Baria about a 2-percent chance of winning his race to unseat Wicker.

Wicker has repeatedly declined to participate in a debate with Baria. This month marked 10 years since the last time since Mississippi had the chance to watch U.S. Senate candidates debate. The last one was in 2008, when Wicker debated Democrat Ronnie Musgrove. In Mississippi's other Senate race—a special election for the seat former Sen. Thad Cochran retired from in March due for health reasons—Sen. Cindy Hyde-Smith, whom Gov. Phil Bryant appointed, has also declined to debate her opponents.

Mississippi has not elected a Democrat to the U.S. Senate since 1982, when voters re-elected John C. Stennis.

On Nov. 6, the same day as the national midterms, Wicker and Baria go head-to-head for a seat in the U.S. Senate. Voters will also choose between Democrat Mike Espy, incumbent Republican Hyde-Smith and Republican Chris McDaniel in the U.S. Senate special election. House seats in each of the state's four congressional districts are also on the ballot. Voters must bring a valid form of photo identification such as a driver's license or student ID. Polls are open from 7 a.m. to 7 p.m.