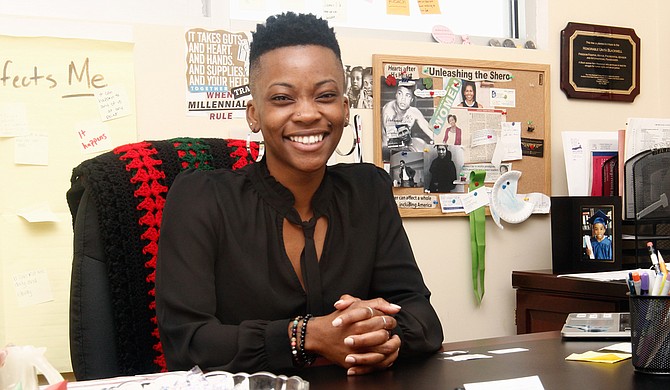 Amanda Furdge has been through just about every support system possible to keep her boys in quality child care, as well as food on the table. Photo by Stephen Wilson.

JACKSON — Amanda Furdge knows a thing or two about being a mom who fights for her kids. Furdge raises two boys on her own, as a single mother without child support.

A native Jacksonian, Furdge moved to Chicago in 2007. She worked several salary jobs, including one as a teacher assistant in Chicago Public Schools.

"You really don't get to see your money like you need to see it because as long as certain things are paid, that's OK," Furdge told the Jackson Free Press.

Then she got pregnant. Furdge, determined to raise and nurse her newborn at home, decided to come home to Jackson. She quit her job, moved back in with her mom and dad and began to raise her son.

Her son's father did not have a valid ID on him when her son, Titan, was born in Chicago, so his father is listed as "unknown" on his birth certificate. Consequently, his father was off the hook for child support, Furdge said. She qualified for food stamps and WIC, a federal assistance program for Women, Infants and Children.

At the time, she was not too concerned with finding a job because Chicago Public Schools was saving her job for her. She wanted to move back to Chicago when Titan turned 1. She didn't know at the time that she was pregnant again. At that discovery, she decided she would need to stay in Jackson and began looking for a job.

Furdge realized quickly that she needed to enroll her boys in child care, especially if she was going to return to work. She learned of the Temporary Assistance for Needy Families, which requires participants to have a full-time job that qualifies within a certain income range or be looking for a job full-time. She used her TANF funds to cover child care costs at the time.

Eventually, she found work with in the City of Jackson's print shop in the basement of Eudora Welty Library. The job had stable hours, 9 a.m. to 5 p.m., but Furdge did not mind the work as long as she could keep getting the child-care credit. To send both Titan and her younger son, Mega, to the facility she wanted would cost her between $650 to $800 a month, depending on how long the month is.

Furdge and her boys were still living with her parents. She finally was able to fix her grandmother's car bestowed to her so she could get around. But then, the Mississippi Department of Human Services removed other safety net measures she had relied on like food stamps and gas cards. She continued to make it work, knowing she could not afford the cost of child care and was grateful to the TANF program. Furdge received a job offer about two years later from the Children's Defense Fund and realized that taking the position, with a salary, could mean losing all the child-care assistance.

"... It was really sad to even have to think about that, this structure is only set up to support me when I am suffering—like when I'm just at the worst," Furdge said. "If you're pregnant and you're struggling, you can get all the resources you need, but when you get ready to come out of those circumstances, oh we can't help you; you're on your own."

In her new role, Furdge was kicked off food stamps and TANF but was able to move out into an apartment with her boys. Luckily she still qualified for a working child-care credit through the Child Care Payment Program, meaning she has to co-pay for half of the child care costs for her sons, something she knew she could not afford, for a full day. In order to make ends meet, she sent her boys to Head Start for the first part of the day and to child care for the rest of it. Her current child-care certificate only lasts through September.

Furdge's story reflects stories of hundreds of mothers who can access help from assistance program at their lowest points, but are quickly expected to make up the slack when they make small gains. Even when Furdge got her job at the Children's Defense Fund, the extra income went toward paying child care and rent, so it really did not feel like an increase in pay at all over her city job. If she had to pay child care costs without any help from TANF, she would have had $1.70 left to pay for groceries, gas and her phone bill Furdge, who did the math at the time, said.

A new study, "Women's Access to Quality Jobs in Mississippi" that looks at how many and what kind of jobs are filled by women in Mississippi found that the pay gap, low-quality jobs and inability to move up the pay scale still affects women who are employed. For women of color, those results are even worse.

The Institute for Women's Policy Research and the Mississippi Women's Foundation released the study this spring. 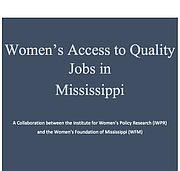 Women make less than men in Mississippi on average, and the pay gap widens dramatically when white men are compared to black or Hispanic women in the state.

Tracy DeVries, executive director of the Women's Foundation of Mississippi, said the study shows that eliminating the pay gap can decrease poverty in the state, particularly by giving women access to high-quality jobs that provide the opportunity for growth in salary. In order to access high-quality jobs, policymakers need to remove the barriers to training and education for those jobs, the report found.

"This means educating girls and young women early about both traditional and nontraditional occupations including job training requirements, occupational responsibilities, and earnings," the report says. It lists several recommendations from passing a state equal pay law to increasing the minimum wage.

The Mississippi Legislature failed to pass an equal-pay bill in the 2018 session, after Rep. Mark Baker, R-Brandon, stripped the original language in the bill and inserted the federal equal-pay law language, weakening its impact on Mississippi employers. The Senate killed the measure anyway.

"If you could just close that wage gap in Mississippi, to me that's really powerful," DeVries told the Jackson Free Press.

Mississippi has a long way to go on that front, however. Women earn 76 cents for every dollar a man in Mississippi earns, which is wider gender wage gap than the national one. But that's mainly white women. Black women make 56.5 percent, and Hispanic women just 54.2 percent of white men's wages in Mississippi, the report found.

Furdge, who recently got married, works with mothers in similar situations in her role as the young women's leadership program director at the CDF southern regional office. She is quick to acknowledge that not all moms are easily able to access the many systems—like food stamps or TANF—like she did.

She has a laptop, for example, which she says many moms do not, making it difficult for them as the MDHS is beginning to convert to an almost entirely online system for requesting and tracking benefits. Most of Furdge's stories about receiving help from MDHS begin with an email.

"If moms make up a prominent part of the workforce ..., which is basically pretty much all of it, why wouldn't you support the people who are making up the workforce?" she said.