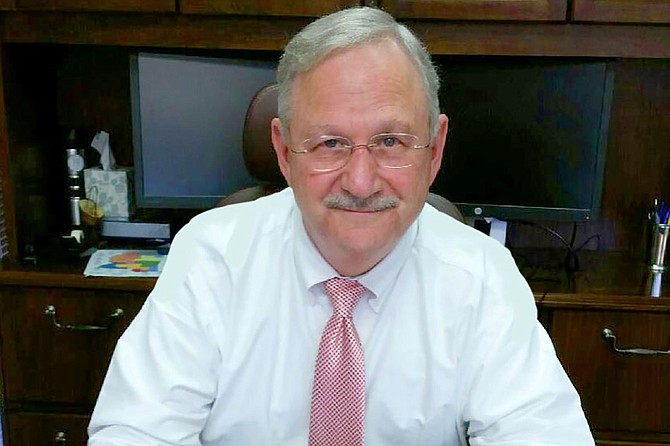 JACKSON — This story has been updated with statements from former CPS Commissioner David Chandler, who reached out to the JFP after the story went to press. His comments are below in the text.

Jess Dickinson likes to use an ancient maxim he heard in a film, "The Bourne Ultimatum," to illustrate where he sits currently as the commissioner of Mississippi's foster-care system.

"Hope for the best; plan for the worst," Dickinson says.

He might have to, especially with the budget predicament the still relatively new Mississippi Department of Child Protection Services faces. Since 2004, the State has fought a federal lawsuit, which a child-welfare advocacy group, A Better Childhood, brought on behalf of the children in Mississippi's foster-care system.

Marcia Lowry, the primary attorney and executive director at A Better Childhood, sent Child Protective Services a letter in December with a warning.

"They were not in compliance with caseloads. ... You can't do anything without caseloads; that was one of the reasons we put off the monitoring for a year," Lowry told the Jackson Free Press. 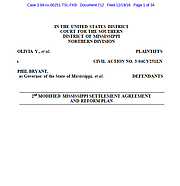 Lowry said caseloads are critical because they affect how other work gets done placing children in homes, licensing foster-care homes, health care and other services foster-care children need.

"All of that kind of stuff is in serious jeopardy right now," she said.

Dickinson, a former Mississippi Supreme Court justice, says the primary reason CPS struggled to meet the caseload goal in December is due to hiring and retaining frontline staff—and ultimately funding.

"The primary reason we can't meet it is we don't have enough money to hire enough workers to take care of all these children," Dickinson told the Jackson Free Press. "We've got to have a sufficient workforce out there, and it's not just hiring caseworkers. You can hire them all day long—it's keeping them, it's retention."

Dickinson went to the State Personnel Board to ask for permission to increase salaries for frontline workers, the social workers who work directly with children and families, from $26,000 to $30,000 starting in 2018. It is hard to retain a recent college graduate who starts a new job on that salary and then realizes they could literally make more at the lowest certified teacher level ($34,000), he said.

Many come to work at CPS while continuing to look for another job, he said. When workers leave, their cases are transferred to the other frontline workers in a county office, which increases their caseloads, compounding the problem with CPS' struggle with compliance. Dickinson wants the Legislature to help with funding to improve hiring and retention.

When Dickinson got to CPS in September, he made a stunning discovery.

"There was no operational budget being produced here," he said, noting that he was not blaming anybody because the agency was amid a transition.

CPS had been a standalone agency since May 2016, however, and had submitted budget requests, which Dickinson soon found were drastically wrong.

After 60 days of going through every spending detail and expense, Dickinson realized the agency would have a budget deficit of more than $50 million. That was when he started meeting with lawmakers and making phone calls.

At least part of the budget hole is due to the Legislature removing CPS from the Mississippi Department of Human Services in 2016. As part of MDHS, CPS had benefitted from a lot of federal funds, which previous staff believed they would receive, Dickinson said.

As Dickinson discovered the agency's budget woes, he wrote John Davis, the MDHS executive director, about Temporary Assistance for Needy Family federal funds, which the agency had counted on in their budget request. Davis had already allocated the funds—and eventually had to retract $30 million to give to CPS, Dickinson said. The two agencies entered into a memorandum of understanding to remedy that problem moving forward. A bill now in conference at the Legislature—meaning in negotiation between the House and the Senate—would allow CPS and MDHS to combine bank accounts again in order to receive federal matching funds as they did before. Dickinson expects it to pass, and that $30 million will help plug the current year's budget deficit. The Legislature, so far, also seems poised to appropriate $12 million to CPS' deficit, which will be put into an MDHS matching account, to cover the more than $50 million deficit.

"I am sitting here on pins and needles, hoping, praying that the Legislature gives us that deficit appropriation," Dickinson said.

But that deficit is in the agency's current budget—not the new budget that begins July 1. CPS needs $133 million in State funds for its new budget to meet the requirements in the settlement agreement, Dickinson says.

After this story went to press, former CPS Commissioner David Chandler provided a statement to the Jackson Free Press pertaining to the CPS budget.

"The governor had a liaison who monitors all CPS activities including preparation of the budget. ... The liaison reports directly to the governor. The budget was reviewed and approved by the governor's office," Chandler said.

"I have talked with every employee who held a ... management position in my administration and they unanimously agree that during our entire administration: One, we always met all requirements of the federal court order and we accomplished this within budget. Two, at my departure, we were confident that the foundation we had established would enable CPS to continue meeting all requirements of the federal court order within the budget. Three, despite all challenges of the federal litigation, we made sure that every single day, our focus was on the best interest of every single Mississippi child." 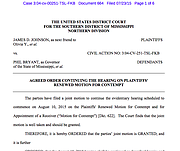 The most recent budget numbers from the House and the Legislative Budget Office show a proposed $98-million budget for CPS, $35 million short of Dickinson's request.

"I don't know what they're going to appropriate. They could level-fund us. They could give us $98 million, in which case we are in serious 'Star Trek' trouble—galactic trouble," Dickinson said, noting he did the math necessary to increase caseworkers at the agency as the settlement agreement stipulates when he asked for $133 million.

Any State funding short of $133 million will mean cuts for Dickinson, which ultimately could lead to CPS coming out of compliance with more provisions of the settlement agreement.

Public Catalyst, the monitor of CPS in the lawsuit, which is called  "Olivia Y" after the pseudonym given a child in the State's custody in the case, is set to publish an annual report from 2017 for Lowry and the plaintiffs next week. Lowry noted that there is an open contempt order in the case, signed in 2015, that says if the State does not comply with the settlement agreement, plaintiffs can seek a hearing on their pending motion for contempt.

If the State fails to comply with the settlement agreement, that will be "a sufficient basis for the Plaintiffs to submit evidence and argument to the Court concerning any available remedy at the remedial hearing, including the creation of a receivership," the 2015 agreed order says.

Put simply, Lowry can ask to appoint a "receiver" over the State's foster care system. She admits that is a drastic option but also points out that the State has had a long time to change its system.

"Because at some point one has to give up on the State's ability to (fix) the welfare system," she said.

Lowry said she has planned a meeting with Dickinson and CPS staff in two weeks. At that point, the Legislature will be close—if not finished—finalizing budgets before the session ends.

How Child Protection Services Got Here

December 2015: Gov. Phil Bryant announces he will appoint David Chandler to lead the new Child Protection Services agency that the state is forced to create due to 2004 lawsuit.

May 2016: The first settlement agreement signed between plaintiffs and state, keeping state from going into receivership until the fall, at least.

December 2016: The second settlement agreement signed between plaintiffs and state, starting the year-long timer for the state to drastically improve its foster care system.

March 2017: Dickinson says he needs $133 million not $98 million like the Legislative Budget Office has recommended for the state to avoid "galactic trouble." Lowry set to meet with compliance monitor, MDCPS about options, potential receivership.

*After this story went to press, former CPS Commissioner David Chandler provided the Jackson Free Press the following statement regarding his retirement: "My retirement was coordinated through the governor's office, and Dickinson set his starting date with the clear knowledge that I would remain until he was ready to begin."