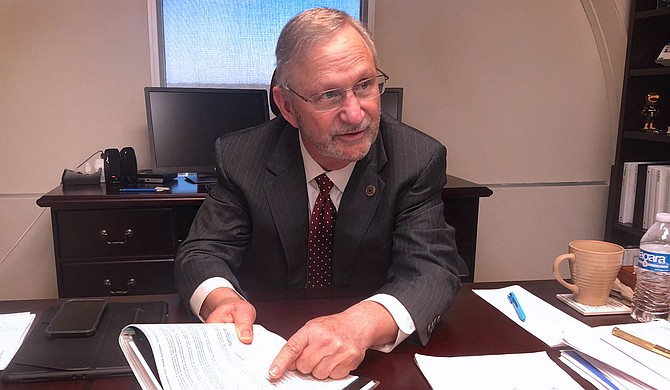 After questions by the Jackson Free Press, MDCPS rejects data included in a recent PEER report, but acknowledges it has work to do. Photo by Nick Judin.

The Mississippi Department of Child Protection Services is challenging a legislative watchdog organization's assertion that MDCPS' number of caseworkers plummeted over the last year in its annual review of the agency. Commissioner Jess Dickinson rejected what appeared to be a dramatic fall in average caseworkers statewide--from 1,120 to 678 over the course of a single fiscal year--that the Joint Legislative Committee on Performance Evaluation and Expenditure Review, or PEER, claimed for the agency.

Dickinson disputed the findings after the Jackson Free Press brought the suspect numbers to his attention earlier this week, and said MDCPS' own data suggested a much smaller decline.

PEER, a legislative committee intended to improve the "economy, efficiency, effectiveness and accountability" of state agencies, found in its annual review of MDCPS that the turnover rate rose from 21% to 30%, according to PEER's findings from the previous year. PEER acknowledges that the higher percentage is in line with national averages for child welfare workers, while saying that it is roughly three times higher than is ideal for such an organization.

The most hotly contested subject in the report lies in the appendices. PEER reported that the "Average Number of Caseworkers" has declined statewide from 1,120 in fiscal-year 2018 to 678 in fiscal-year 2019, a decrease of more than 40%. The report showed that caseworker presence has precipitously declined in every region in Mississippi, a finding MDCPS asserts is totally unfounded.

Which numbers are accurate could prove significant indeed: PEER also found a small decline in average caseload for frontline caseworkers, which are part of MDCPS' ongoing, court-mandated commitments to reducing overloaded caseworkers. If all of PEER's numbers are correct, the potential implications are immediately apparent: 40% fewer caseworkers on average across Mississippi, in a single year, with no spike in caseloads would raise the question of where all the missing work has gone, and what impact that might have on Mississippi's nearly 5,000 children in foster care.

PEER Executive Director James Barber initially stood by the report, telling the Jackson Free Press that the numbers came directly from the State Personnel Board. The PEER employees responsible for the statistical analysis in the report were not available for comment by press time.

Shortly before this story went live, Barber contacted this newspaper to say that PEER and MDCPS staff are conferring on the data in the appendix, and that no conclusions should be drawn from the data until the organizations reach an agreement. This includes the report's assessment of MDCPS' turnover rate, which factored into PEER's recommendations for the agency.

For MDCPS, A Long Road Ahead

Disagreements with PEER aside, MDCPS leadership admits the agency has much work ahead. Reducing employee turnover is chief among those goals.

Child-welfare work can be traumatizing, Brandon told the Jackson Free Press, and combined with excessive workloads, burnout is always a risk for frontline employees. She acknowledged that caseworker numbers have slumped in the previous fiscal year, and suggested that re-hirings could, in some cases, lead to even more departures. MDCPS has yet to secure the funding for step pay raises to bring agency veteran pay in line with entry-level positions, leading to fresh recruits with comparable salaries. The disparity has pushed some caseworkers out, Brandon said.

Court orders following the 2008 Olivia Y. settlement help drive MDCPS' efforts to reduce caseloads. That lawsuit, predicated on the traumatic experiences of 13 children in the care of Mississippi's Division of Family and Children's Services, placed the state's child-welfare agency at risk of being subjected to federal-court receivership. That could mean that an outside entity would assume management of the system. Less than a decade later, DFCS separated from the Department of Human Services, and MDCPS was born.

The fallout from the Olivia Y. case and the ongoing process of certifying MDCPS' compliance with the settlement terms has had a significant impact on the morale of caseworkers, both Dickinson and Brandon acknowledged. Attorneys for the plaintiffs in that case have repeatedly filed motions to hold MDCPS and its predecessor organization in contempt.

New initiatives for supporting the emotional and psychological needs of its employees are in the works, Brandon said in the interview. Additionally, the agency touts its new "Safe at Home" policy, intended in part to reduce the number of family separations and children in foster care.

Joy Hogge, executive director of Families As Allies, said evolving methods for keeping children with their families and out of foster care are both beneficial for the children involved and more of a burden on the social workers concerned. "Even if it's an approach that we know works better for the children, the people working for them need a lot more support and training to do it," she said in an interview.

CLARIFICATION: After this story went live, Lea Anne Brandon contacted the Jackson Free Press to clarify that a process of step pay raises for agency veterans exists but has yet to be funded. Originally, the story stated that older hires and new recruits were paid on a different scale.