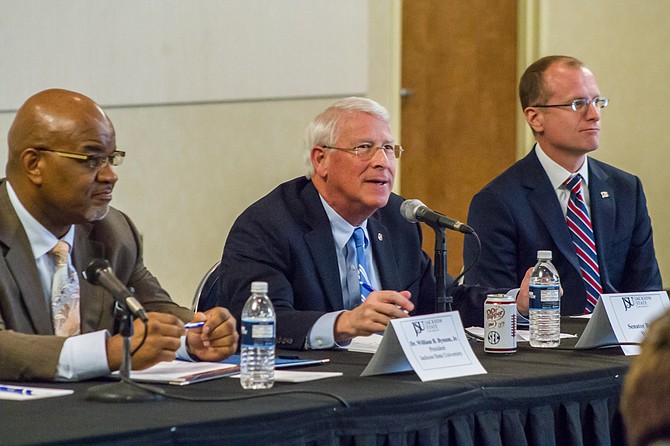 Wicker was delighted to present his "old friend," Bynum, who then introduced himself as the "self-described, God-loving, God-fearing, blessed and highly favored 11th president of 'Thee I Love,' Jackson State University."

The panel of two dozen entrepreneurs, telecommunications executives, professors, and politicians hinged on workforce development and training particularly in the telecommunications and technology sector. They also discussed how broadband expansion in rural areas would mean more opportunities for Mississippians to advance.

But, with the realities of "brain drain" of state residents to other places, panelists made it clear they are not only working to mend technology gaps, but are also thinking of ways to get Mississippi's talent to stay here, despite higher-paying opportunities elsewhere.

Coughlin focused on a different struggle: educating people on what coding is and the fact that it is a real opportunity in Mississippi. When he began talking at high schools, he recalled having to back up in his presentations to explain the industry, what coding is and the job opportunities in this state because youth and public-school awareness is low, he said.

"We can build all the opportunities we want," Coughlin told the panel. "But, I sit down with 18 year-olds who are in high school who have no idea what comes after graduation, and they don't know that in their backyard there's a $50,000 job..."

Matt Dolan, chief executive officer of the Global Teaching Project, which brings advanced STEM courses to rural districts such as the Delta and the northeast part of the state, discussed the teacher shortage in the state and Internet deficiencies in schools, when Carr asked about the connectivity in schools around the state.

"In our experience every school has broadband in theory. In practice, it has been spotty, (and) the range of connectivity is quite different among schools," Dolan said. "All of them have some connectivity. The issue, as you might imagine, is the students at home—quite often they have no Internet access."

Carla Lewis, chief information officer at C Spire, and Mayo Flynt, president of AT&T Mississippi, both said they would hire more Mississippians if they had more skilled applicants, in response to a question from Wicker.

In November 2017, Secretary of State Delbert Hosemann conducted a nine-question survey on business needs, employee qualifications and business barriers that found about 75 percent of businesses in the state consider it moderately to significantly difficult to assemble an educated workforce. Nearly half the businesses surveyed said they would expand if they had an educated workforce.

The other less-discussed reality was the F.C.C.'s net-neutrality vote in December to roll back protections that barred Internet service providers from blocking websites or apps, and slowing connections for legal content or creating "Internet fast lanes" for companies and consumers who paid more and slowing down Internet for those who did not.

Carr referred to those Obama-era protections put in place in 2015 as "1930s-style regulation, and believes the way to get more Internet access to everyone is through deregulation.

"Removing Title 2, I think, will create incentives for providers to invest, especially the smaller ones that are trying to reach some of these rural communities," Carr told the Jackson Free Press.

He added that the roughly $10-billion Federal Universal Service Fund created to give more Americans access to communications service could also help "unserved and rural areas" they have targeted.