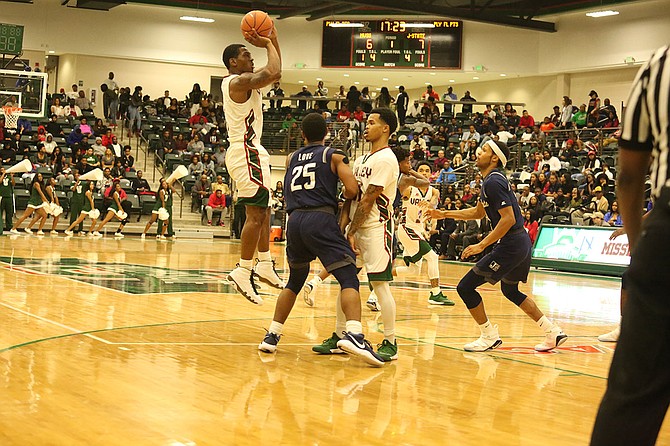 This year, Mississippi Valley State University is picked to finish ninth in the SWAC. Photo courtesy MVSU Photo by MVSU

Last season ended up being a bust for the Braves, as the Alcorn State men's team went 11-21 overall and managed a 7-11 record in Southwestern Athletic Conference play. ASU enters this season having to replace its top scorer, A.J. Mosby.

Returning sophomore guard Maurice Howard has stepped up from his average of 10.3 points per game last season to 14.5 points this season. Transfer DeShaw Andrews is helping ease the scoring load with a 13.4 average per game.

The Braves are currently 4-7 overall with a couple of tough out-of-conference games left. In the preseason, ASU was picked to finish seventh in the SWAC but could be surprisingly high on the list when the dust settles.

Mississippi Valley State started last season 0-20 and won just four games. That means that there is pretty much nowhere to go but up for the Delta Devils this year.

MVSU already has half of its win total from last season, with two wins before  conference play begins in 2019. Both victories have come in the Delta Devils' only home games of the season thus far.

This team will lean hard on Preseason All-SWAC First-Team forward Dante Scott, who is averaging 13.3 points per game, and Jordan Evans is falling only a step behind, chipping in 12.5 points per game.

Most other MVSU players are not averaging more than six points per game, though. That will put a ton of pressure on Scott and Evans to score each night. This season will be about showing improvement and building towards the future.

The Delta Devils were picked to finish ninth in the preseason, and it would be a shock to the nation if they managed to win the conference. MVSU winning the SWAC would be the story of the entire college-basketball season if it actually happened.

Last year, it was feast or famine for the Statesmen. Delta State University alternated between losing and winning streaks throughout the season, and wound up with a 15-16 overall record and 11-9 record in the Gulf South Conference.

Fans must have been nervous when the team opened the season dropping the first two games, but the Statesmen then went on a three-game winning streak. A late November loss to the University of West Alabama broke the streak, but DSU started up another, with five consecutive wins.

The Statesmen are in the thick of the conference race early at 3-1 and look to return to the conference tournament title game after coming up short in double overtime last season.

Preseason All-GSC guard Brett Warner is the main scoring threat at 14.7 points per game this season, though he is getting plenty of help carrying the scoring load with three other players averaging double-digit scoring.

The Statesmen were picked to finish third in the conference with one first-place vote. DSU, barring injuries, will be in the thick of the conference race all season and one of the top teams in the GSC tournament.

Mississippi College is finally able to compete at the Division II level after moving up from the Division III level. Last season brought the team a much-improved 9-16 overall record, and the early results show more potential this season than the previous one.

MC has already won four games since the start of this season, and the losses have been close, as the talent has upgraded. However, the team has not managed to string any wins together. All season long, MC has won a game only to lose the following bout, reaching a 4-5 record. The team will be hoping to avoid a repeat of last year's finishing run—an eight-game losing streak.

The team is not ready to play for the conference title, but it avoided being picked to finish last in the preseason poll. MC is expected to finish 11th, but could end up doing better than expected, depending on how the rest of the conference plays.

Millsaps College is off to one of the hottest starts in the state. The Majors are currently 8-2 and are winning most of the time in dominating fashion. Comparatively, the team sat at a 3-5 record by this point last year.

The fast, successful start would give the Majors plenty of confidence heading into Southern Athletic Association play in 2019.

The Majors are getting plenty of scoring with a balanced attack from several players. Only senior guard Michael Sullivan is averaging double-digits at 14.9 points per game.

If the hot streak continues, Millsaps could be a dark horse to win the conference title. It is early, but little is slowing the Majors down at this point in the season.

Belhaven University has a chance to improve on last season's record. The Blazers finished 5-20 overall and 3-15 in the American Southwest Conference for the 2017-2018 season. Luckily, the team is already a little more than halfway to their win total from the previous year, with three wins so far this season. Belhaven has come up short in five games, however, including three consecutive losses at the end of November and beginning of December.

The Blazers are eligible to win the regular-season conference title, but that seems unlikely, as they were picked to finish last in its division. Brosnan Cooks with 12.9 points per game and Rick Hodum at 10.7 points per game lead the team in scoring, but the team will need to start playing better defense or scoring a lot more across the board to see results.

Tougaloo College, like Millsaps, is off to a quick start to the season. The Bulldogs have an 11-2 record so far this year and are currently riding a five-game winning streak. That is a marked improvement from last season, which ended with a 15-10 overall record and 6-6 in Gulf Coast Athletic Conference record.

In the preseason, coaches picked the Bulldogs to finish sixth in the poll, but this might shape up to be surprising year for Tougaloo. This has been the team's strongest showing at the beginning of the season since 2010.

It helps that Tougaloo has head coach Thomas Billups back for his fifth season, along with returning star players, such as All-GCAC Preseason Player of the Year Tonzell Handy and Dearius Griffin, to help put up numbers and keep the ball in the Bulldogs' possession.