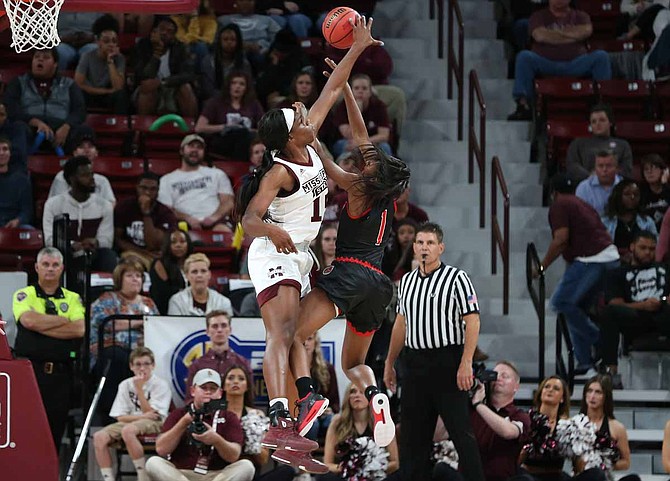 With Victoria Vivians now in the WNBA, the Bulldogs will depend on players such as Tearia McCowan. Photo courtesy MSU Athletics Photo by MSU Athletics

The Bulldogs have gone to two-straight national championship games and come up short in both years. Mississippi State University looks to finish the journey this season but will have to do so without Victoria Vivians, who has moved on to the WNBA.

In the preseason poll, the team was placed at the top of the mountain as the favorite to win the conference. The Bulldogs might not have Vivians, but they do return Preseason SEC Player of the Year Tearia McCowan. Anriel Howard on the Preseason All-SEC First-Team joins her. Vic Schaefer has built this program into a yearly contender. Currently, the Bulldogs are ranked No. 5 in the nation and off to an 11-1 start.

MSU has only been challenged once this season in a five-point win over Marquette University. A maroon onslaught has crushed the rest of the teams the Bulldogs have faced so far.

Barring injuries, anything less than a deep run in the NCAA Tournament is expected. A third straight appearance in the national championship would not be a surprise.

Last season, the University of Mississippi sat at 11-5 in early January after a win over the University of Florida. That is when the wheels fell off as the team lost 13 straight games before besting the Gators in the SEC Tournament.

The season ended with a loss to Missouri and a 12-19 record. Not much is expected from the Rebels this season, as SEC polls pick them to finish last in the preseason.

Currently, UM is 5-8. It will be in SEC play that the Rebels will have to pull some upsets in conference games to have a shot at the postseason.

Preseason All-SEC Second-Team Shandricka Sessom will have to play big for this club to make noise in the SEC. The Rebels won't make it to the top of the conference but should fight to stay in the pack most of the season.

The University of Southern Mississippi could not get going last season. Every time the Golden Eagles went on a winning streak, a losing streak that equalled or exceed the wins soon followed.

USM finished 15-15 overall and 7-6 in Conference USA play in a season that was not terrible but was not great. Southern Miss will try to climb back to near the top of the conference this season and will lean on Preseason C-USA Team member Shonte Hailes.

Southern Miss is currently 8-4 on the season with a similar start to last season. The Golden Eagles are picked to finish eighth in the conference during the preseason, and it looks like that is an accurate prediction.

This team could reach the postseason but is not playing that way at the moment.

This season, the Tigers were picked to finish fifth in the SWAC but are off to a rough start. At press time, JSU was 3-6, with the three wins coming against weak foes that are keeping this team a float in the out of conference slate.

JSU's postseason hope will rest on winning the conference. The SWAC is a one-bid lead for the NCAA Tournament, so conference play is  important for this squad.

Jackson State placed forward Marniesha Hamer on the Preseason All-SWAC Second-Team. Hamer is currently 13th in the SWAC in scoring at 11.3 points per game this season. Christina Ellis is 12th in the category with an average of 13.3.

Last season, Alcorn State University went through four losing streaks that went three games or more during the season. The Braves went 12-18 overall and 8-10 in SWAC play as ASU never reached above .500 after the middle  of December.

ASU is off to a rough start at the beginning of this season. Currently, the team is 1-9 and went through the month of November without a victory.

The Braves were picked to finish eighth in the conference preseason picks and look on track. ASU features Tatyana Calhoun, 18th in SWAC's scoring statistic, who is currently averaging 9.7 points per game.

Things can't get much worse for Mississippi Valley State University. Last season, the Delta Devils went 0-19 to begin the season. The team didn't win a game until late January.

Overall, MVSU went 2-28 overall and 2-16 in conference play. This season has been a little better start, with the team earning a win before the first month of the season ended.

Right now, the Delta Devils are 1-9 at the start of the season but are already halfway to last season's win total before the New Year. Any improvement after losing 28 games last season should be pointed out. Another highlight is Kristy Parker, who is currently seventh in the SWAC in scoring at 14.3 points per game.

MVSU is picked to finish last in the conference play. It would be a surprise if the Delta Devils finished in the middle of the pack.

This could be a turnaround season for Delta State University. The Statesmen went 12-15 overall last season and 10-10 in conference play. This year DSU is off to an 8-3 start and a 3-1 start in Gulf South Conference play.

DSU was picked to finish seventh in the preseason but is on pace to exceed that projection. The Statesmen were on a seven-game winning streak after dropping the first two games of the season. On Dec. 17, they lost against Union University

Just like the men's team, the women's team has struggled to compete as the program made the jump from Division II to Division III. Last season, Mississippi College went 9-17 overall and 5-15 in conference play.

In the preseason, the Choctaws were picked to finish 10th in the 13-team GSC. MC opened the season with a loss before winning three straight games.

The winning streak ended, and the Choctaws had a four-game losing streak. Early in the season, MC is 4-5 overall and 1-3 in conference play.

The Majors could be in the midst of a turnaround season after they finished last season 8-18 overall and 5-9 in conference play. Millsaps College is just one win away from surpassing last seasons win total with a chance to get two wins before the New Year.

The team is currently 9-1 after starting the season at 1-1. The Majors currently have an eight-game  winning streak.

Last season, Tougaloo College went 10-17 overall and 4-8 in Gulf Coast Athletic Conference play. In the preseason, the Bulldogs were picked to finish  sixth in the conference.

Currently Tougaloo is 3-4 overall. The Bulldogs haven't opened conference play and have a  1-2 away record.

Belhaven is picked to finish fourth in its division, and that has a solid chance of coming true. Currently the Blazers are 5-5 overall.