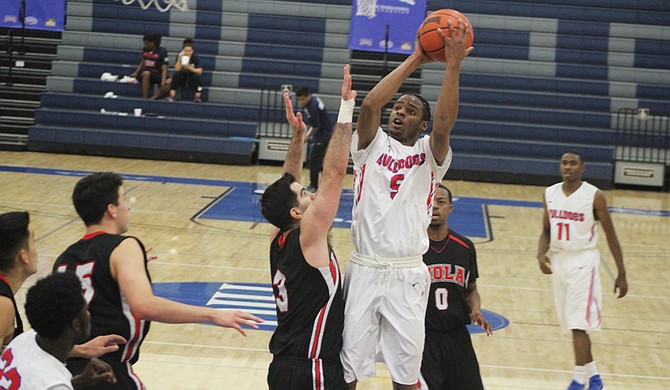 Last season was a tough and strange one for Alcorn State University. Head coach Luther Riley took a personal leave of absence, leaving assistant coach Shawn Pepp to lead the team. The Braves finished with a 6-26 overall record and 4-14 record in SWAC play.

In March, Alcorn State decided not to renew Riley's contract and hired Montez Robinson to take his place in April. Leading scorer LeAntwan Luckett also transferred to Louisiana Tech University in the offseason. Robinson will have to lean on All-SWAC First Team pick Marquis Vance to carry the load this season. Currently, Vance is leading the team in scoring with 10.7 points per game.

The Braves, who currently sit at 1-8, have played a very tough nonconference schedule this season, scoring their first win against Blue Mountain College on Dec. 14. They are picked to finish near the bottom of the conference. If injuries don't derail the team, maybe it will be battled tested for conference play and surprise the rest of the Southwestern Athletic Conference.

Mississippi Valley State University finished nearly identical to Alcorn State with a couple of exceptions. The Delta Devils lost one less game at 6-25 and won one more in conference play at 5-13.

This season, MVSU is picked to finish near the bottom of the league again. Head coach Andre Payne is getting no breaks in the schedule, at least for the out-of-conference slate. Currently, the Delta Devils are 0-13 after games against the University of Nebraska, New Mexico State University, Brigham Young University, the Air Force Academy and Northwestern University. The Delta Devils still have a game against the University of Hawaii on Dec. 29 left to play in the nonconference slate. MVSU might not have a win yet, but it does have two players scoring in double digits. Marcus Romain is averaging 17.3 points per game, and Damian Young is averaging 11.4 points per game. Much like Alcorn State, if the Delta Devils can stay healthy, they will be battle-tested come conference play.

Last season, Delta State University finished middle of the pack in the Gulf South Conference. The Statesmen finished 15-14 and lost in the opening round of the conference tournament.

This season, DSU is hoping to turn that around with last season's GSC Freshman of the Year PJ Davis returning, and also fellow preseason All-GSC members Devin Schmidt and Jack Madgen. Delta State head coach Jim Boone will try to guide this team to a better finish than its fourth-place projection in the preseason.

The Statesmen are currently 9-3 on the season with consecutive wins against the University of West Alabama, Christian Brothers University and Union University, though all three were close.

In their first season back at Division II, the Choctaws didn't do half bad. Mississippi College finished the 2014-15 with an 11-13 overall record and was 9-13 in GSC play. The Choctaws hope to improve on that mark in their second season at the DII level, returning with four of their top-five scorers from last season.

Tory Rice, who averages 15.5 points per game, and Tristan Moore, who averages 14.1 points, currently lead the way for the Choctaws. Johnny Rucker is also scoring in the double digits with 13.5 points per game. Head coach Don Lofton will try to win his 200th game this season as he enters this campaign with 189 wins. Currently, the Choctaws are 4-4 overall and 3-3 in GSC play, but either way, they won't be able to play for a conference title until the 2016-2017 season, when their transition to DII is complete.

Belhaven is currently 1-7 on the season after starting with losses to Emory University and rival Millsaps College. The Blazers started ASC play with an overtime win against the University of Mary Hardin-Baylor, which has been their first and only success so far.

Millsaps College will try to improve on last year's 7-19 season, where the Majors went 7-7 at home but 0-12 in road games. Last year's team was only 3-11 in Southern Athletic Association play and ended the season with a four-game losing streak.

This season has started out rocky for the Majors, as they are off to a 1-9 start after four straight losses to begin the season. Millsaps went 0-3 on the road from the start as the travel woes continued; however, the team did defeat Belhaven at home for its first win of the season. They followed that with five straight losses.

The Majors currently have one double-digit scorer this season—Marc Robertson, who is averaging 11.3 points per game.

Last season, Tougaloo College dug itself out from a slow start to get back to .500 basketball at 8-8 by late January. The Bulldogs finished the season 13-13 overall and 9-5 in Gulf Coast Athletic Conference play under first-year coach Thomas Billups. The season ended with a loss to Xavier University in the semifinals of the GCAC tournament.

Billups is back for a second season with the Bulldogs, who are currently 6-4, and he has some stars to lean on this year: Quintarius Porter, named Preseason All-GCAC Team, averages 20.1 points per game; De'Andre Scott averages 13.3 points; Jarmell Anderson averages 12.3 points; and Andravious Smith, GCAC preseason honorable mention, averages 12 points.

The Bulldogs are currently 6-4 on the season and have beaten three ranked foes. Tougaloo also took Alcorn State to double overtime in an exhibition game. Conference play hasn't started yet for the Bulldogs, but they are going to be battled-tested before their first GCAC game. Tougaloo was picked to finish fourth in the conference in the preseason.