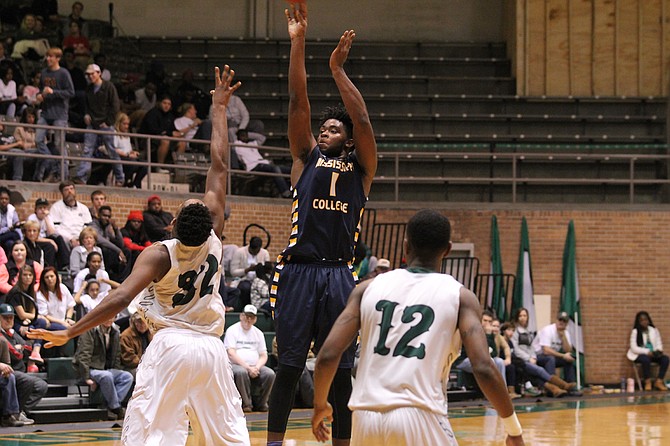 The Braves rebounded from the tough non-conference slate to finish second in the SWAC, ending the season with a close loss to Mississippi Valley State University in the SWAC Tournament. Alcorn had a 15-15 overall record, finishing with at least a .500 record for the first time since 2002.

This year could be more of a struggle with another difficult non-conference slate and a lack of experience on the roster. However, ASU does have returning preseason second-team All-SWAC forward Marquis Vance, DeAndre Davis and Reginal Johnson, who were all major contributors last season. The Braves were picked to finish fifth in the conference in the preseason poll.

In just his second year, Robinson will have to do his best coaching job yet if he wants to win the SWAC Tournament and go to the NCAA Men's Division I Basketball Championship.

Mississippi Valley State University head coach Andre Payne's second season got off to a poor start. MVSU began with a 14-game losing streak and didn't win a game until the new year started.

The Delta Devils didn't find much success in the conference slate, either, finishing seventh in the SWAC. They had brief surge during the conference tournament, winning two games before Jackson State University ended their season.

MVSU must take the SWAC Tournament to get into the NCAA Championship, so winning conference games is key.

Delta State University finished last season with a 19-11 overall record and a 13-9 record in the Gulf South Conference. That earned the Statesmen a tie for third place in the conference and the fifth seed in the GSC Tournament. DSU reached the semifinals before losing to the University of Alabama in Huntsville.

Mississippi College finished last season with a 10-18 overall record and a 7-15 record in the GSC. After transitioning to Division II, MC is now eligible for the conference tournament, but a run at the GSC title likely won't happen this year, as MC must replace its four top scorers from last season.

The Choctaws do have returning forward Stacey Mack and guards Otis Harvey, Antonio Johnson and DeOndre Haynes, as well as four other players with limited roles last season. This season rests on how quickly the new starters take to their expanded roles.

Expect the Choctaws to take steps forward but not to be much of a challenge for the conference title.

Millsaps College struggled last season, finishing 5-21 overall and 4-10 in the Southern Athletic Association. Between player transfers and graduations, the Majors won't have much returning talent to improve this year.

Millsaps hasn't had a winning record in men's basketball since winning 25 games in 2007-08 season. Since then, the team has only had double-digit seasons twice, in the 2009-2010 and 2010-2011 seasons. Millsaps will likely keep struggling with their play on the court and with keeping players on campus.

Don't expect things to change this season with so much turnover since last year. Unfortunately, the Majors look like a bottom-of-the-conference team.

Belhaven University didn't have many victories on the court last season. The Blazers won just two games as they made the move from NAIA to Division III. They won't be eligible for the American Southwest Conference title or the Division III Tournament, yet.

Belhaven fans had to watch the season slide by last year as the bottom fell out, ending in a 2-23 record—the Blazers' worst record since winning just five games in1962. It was only the team's fifth time to fall short of double-digit wins since 1990.

The team will rely on forward DaJuan Young, who was named to the ASC preseason watch list, but he will have to do more than his four points per game from last season if the Blazers are to score more wins this time around.

Tougaloo College started last year with a 7-4 record before losing five of their next seven games. The Bulldogs won four of their last six games to reach 13-11 overall and 5-7 in the Gulf Coast Athletic Conference. In the GCAC Tournament, Tougaloo fell 94-92 in overtime against Xavier University of Louisiana.

This season, Tougaloo will have to face Dillard University and Talladega College, who will be the teams to beat in the GCAC. The Bulldogs have returning forward Andravious Smith, who averaged 15.7 points, and guard Jarmell Anderson, who averaged 12.3 points, but Tougaloo will need more production from other players to fight for the GCAC title this season.