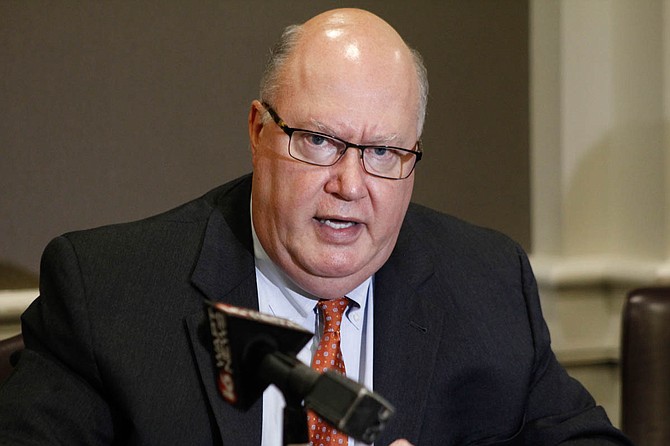 Bob Miller, the City's director of public works, is giving Siemens Inc. six months to get the water-billing system fully functioning because nearly one-third of Jacksonians are receiving water without paying for it. He is pictured here at a press conference on April 16, 2018. Photo by Stephen Wilson.

JACKSON — If Public Works Director Bob Miller gets his way, Jacksonians could start getting accurate water bills in the next couple of weeks. Some locals have gone as long as a year without paying for water or have been slapped with thousand-dollar bills after not getting one for months on end.

The Jackson City Council will vote at its 6 p.m. meeting tonight on Miller's proposal to amend the Siemens Inc. contract to get the billing system fully functioning in six months and then remove the corporation from maintaining the systems thereafter. The company would still remain in a contract with the City of Jackson, however.

Miller found that the City has not received at least $10 million in revenue from water bills in the last six months because at least 20,000 customers, one-third of around 57,000 accounts citywide, are getting water pumped through their homes without paying for it. Customers are "stranded in the system" meaning they either do not get billed at all or the bill is arbitrary and not based off an actual meter reading. The same thing happened in 2016.

Without the money from water payments, Miller said the City runs the risk of not meeting its bond payments, not paying its debt services, not paying regular bills and not providing safe drinking water to the residents of Jackson. The Siemens issues could also affect the City's obligations to the Environmental Protection Agency's consent decree with Jackson over wastewater violations.

At a Monday work session, Miller explained a proposal to the Jackson City Council that would amend the Siemens contract to fix the billing system by the end of September and then send Siemens on its way.

"Frankly, I told the folks from Siemens that in six months, I never want to see you again," Miller said before the council.

From an excess of meters in the contract and unfinished work at a wastewater treatment plant, Miller found $1,122,000 already in the contract to pay Siemens contractors to fix the billing system by September. Miller calls this a "scope swap" because this does not change the net value of the contract at all; it just swaps out the expectations.

Miller hopes to send out corrected bills in the next few weeks. If customers have not been billed for over a month, they will get a payment plan that gives them the same amount of time to pay back their water bills as the amount of time since they got their last water bill. New bills would contain any leak adjustments already factored in. Considering some customers have not gotten bills in a year, it could take as long as 18 months for the City to recoup all of the revenue those customers owe.

A Siemens spokeswoman, who did not provide her name for attribution, told the Jackson Free Press that the project "has faced challenges," but that the City and Siemens have worked through them and the company looks forward to working with Jackson over the coming months.

Miller is confident this will be the last time the City will have to address its water-meter system and that he can tackle this even with extremely low staff numbers in the public works department.

"[Y]ou've got somebody that's been doing this for 36 years who knows how to do this, and does not want to do it again," Miller said to the council about himself. Most recently, Miller worked as the deputy director of the Sewerage and Water Board in New Orleans for eight years, and before that he spent 26 years in Louisville, Ky. working in water services.

The Jackson City Council voted in January to sue Siemens, with the mayor declining to give his administration's position at that time. At the Monday work session, Lumumba echoed the importance of finding an immediate solution, saying that legal action would not rescue the City from its funding gap today.

"Whether we like the car or not, we own it so we have to operate with what we have," he said. "It doesn't mean that we can't deal with the car dealer later on. But we own the car right now."