Water Customers Still Getting No Bills as City Scrambles for Payments 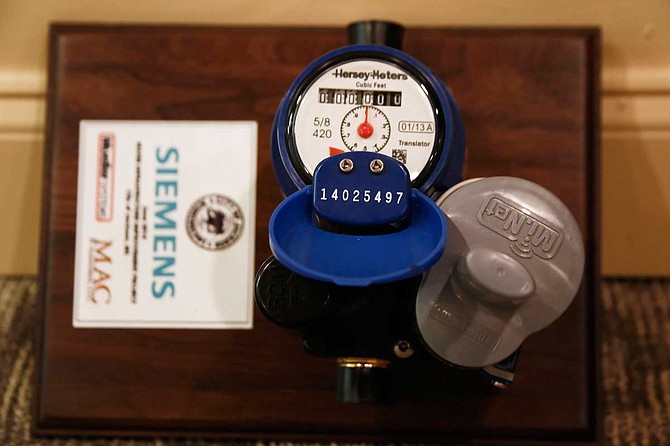 The City of Jackson signed a hefty contract with Siemens Inc. for new, and supposedly more accurate, water meters—but that did not happen. The company says now that it fulfilled its contractual obligations even as the City fights to recoup money after not billing for water for a year or more. File photo by Imani Khayyam

JACKSON — The City of Jackson over-billed David Thompson several times in 2018, with his most recent water bill coming in at $937, even though he lived alone in his home in north Jackson near Ridgewood Road.

Thompson has not received another water bill since August. He is a native Mississippian who has lived in Jackson since 1992. He's never had a problem with water billing until 2018, but he is now one of about 10,000 customers "stranded" in the system.

After receiving his last bill, he wrote a letter to City Services expressing his concerns in regards to the billing error and wrote that he would get legal help if needed. Six months later, he has not received a response.

"My usual bill has been up between $35 to $45, sometimes a little more a month," Thompson told the Jackson Free Press in a Feb. 21 phone interview.

Though the City of Jackson recently started getting tough on large, unpaid water bills that resulted from its and its contractors' own errors, some citizens like Thompson are still dealing with outrageous bills or not getting bills at all.

Customers are fed up with billing errors, not receiving bills and the lack of response in many cases. Many citizens are on limited incomes with no cash reserves, so catching up water bills, even on a payment plan, is not as easy for them as the City would like it to be now that it is trying to recoup payments it did not bill for over a long period of time. And with the billing errors, it may be hard for many customers to now trust that the bills for past water are correct.

The City tends to point to the problems the unsuccessful contract with Siemens, a costly project promising to improve water billing and meters, resulted in, which the City, Siemens and subcontractors tend to blame on each other.

"The root cause of this problem is the unsuccessful implementation of a project to change the manual read meters to automated read meters and to install new billing software, Director of Public Works Bob Miller told the Jackson Free Press on Feb. 21. "This project was intended to increase water and sewer billings and collections by an amount that was expected to exceed the debt service amount that was incurred for the project."

The primary contractor maintains that it did its part. "Siemens completed its work with the City of Jackson in the fall of 2018," the company said in a Feb. 19 statement to the Jackson Free Press. "Project completion was validated by an independent, third-party review performed by West Monroe Partners, who was hired by the City of Jackson and performed its work under the City's direction. ... A construction period savings report provided to the City in the spring of 2018 reflected that the contractually-guaranteed accuracy of the new water meters had been achieved. Siemens continues to work in good faith with the City of Jackson."

Whoever was at fault, Jackson citizens ended up with water meters that did not work correctly and a lack of accurate water bills, or any at all, for many months, even as contractors were paid for the work. Now, the City wants its money, even if it is not yet billing everyone for current water bills correctly.

"If monthly collections were, for example, $7 million before the project, and additional debt service for the project was $750,000 per month, then the additional collections would need to be $750,000 or 11 percent higher just to break even," Miller added. "Instead of increasing revenue collections, they have fallen by 30 percent to 50 percent. When the cost of additional debt service is added to the effect of the decrease collections, not revenues available for operating expenses have fallen by 40 percent to 60 percent."

Miller says he needs to do three things in order to repair the system for accurate billing: replace the computer systems because they are slow and outdated; bill the 10,000+ residents currently "stranded" in the system without getting bills, and effectively and correctly understand how to use the billing software.

"We're having a crisis of not being able to pay our bills," Miller told the Jackson Free Press in an interview. "There are all kinds of issues associated with that."

Many residents would say the same thing.