Fighting for the Right to Vote 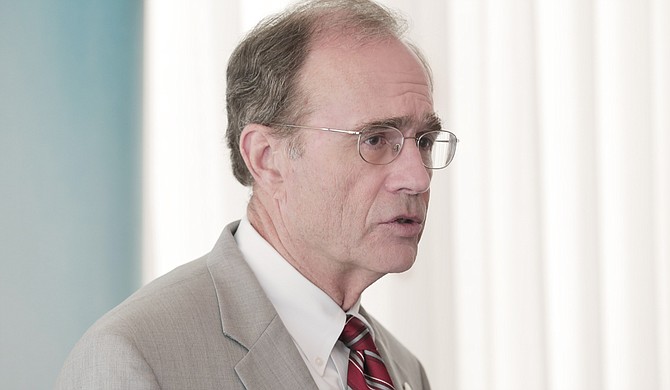 Three Mississippians sued Secretary of State Delbert Hosemann over the state’s list of disenfranchising crimes that prevent some from voting again. Photo by Imani Khayyam.

JACKSON — Roy Harness is a U.S. Army and a National Guard veteran, a recovered drug addict and a Jackson State University student studying for his master's degree in social work. He has lived through the stress of military life, the depressing depths of addiction, which led to years of homelessness and helplessness—and ultimately a stint in prison for forging a check.

"I owed the drug dealer a lot of money. That's what caused me to write the check," Harness told the Jackson Free Press.

The McComb native says he started using drugs to numb his fear during his military service as well as deal with the pain of his service-related injuries. He went to prison for the forgery in 1986. Harness knew before he was released in 1988 that he had lost his right to vote—he remembers talking about it while he was in prison.

"You hear about all this in jail," he said. "... When I was up in jail, they were letting people out who were able to go vote."

Mississippi state law on who gets to vote after serving time in MDOC's custody appears rather arbitrary. Twenty-two disenfranchising crimes are listed in a 2009 attorney general's opinion that clarifies the law. These crimes range from embezzlement and felony bad check to murder and rape.

Harness and two other Mississippians are now suing the secretary of state over losing their voting rights. The Mississippi Center for Justice filed the lawsuit, arguing that the list of crimes is "the last remaining vestige of the infamous plan by the framers of that (1890) Constitution to rob African Americans of the right to vote that they attained after slavery was abolished in the aftermath of the Civil War."

The lawsuit argues that the list of disenfranchising crimes in state law were "those that drafters believed were committed by disproportionately African Americans." The lawsuit does not seek to strike murder and rape from the list, which a constitutional amendment in 1986. 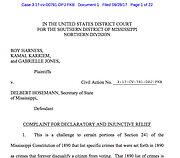 Citing a previous case, Ratliff v. Beale, "this otherwise quirk collection of crimes was listed in Section 241 because the 1890 framers believed them to be disproportionately committed by African Americans and they chose 'to obstruct the franchise by the negro race' by targeting 'the offenses to which its weaker members were prone,'" the complaint states.

Poll taxes and literacy tests were also used to keep African Americans out of the voting booths, but subsequent lawsuits in the 1960s and 1970s helped disband these provisions, along with federal laws.

"The package of measures that the framers of the 1890 constitution adopted were known as the 'Mississippi Plan,'" Mississippi Center for Justice attorney Rob McDuff said. "In the years afterwards, many other southern states did something similar, and thereby, putting the nails in the coffin of African American political participation for the next 75 years."

Ultimately, the Mississippi Center for Justice lawsuit maintains that the disenfranchising crimes, except murder and rape, violate the Equal Protection Clause of the 14th Amendment in the U.S. Constitution. Bribery, theft, arson, obtaining money or goods under false pretense, perjury, forgery, embezzlement or bigamy are all listed as crimes that come with an added consequence of losing one's voting rights. This list had a discriminatory impact on African Americans back in the post-Civil War era of Mississippi, and the lawsuit alleges the list still does today.

"According to the 2010 census, 35 percent of Mississippi's population 18 and over is African-American," the complaint says. "Approximately 60 percent of the people convicted of those disqualifying crimes in the Mississippi state courts between 1994 and the present are African American."

"At no point did the legislative resolution or the ballot state that the amendment would affect the list of disqualifying crimes or that it would remove burglary from the list," the complaint says.

In other words, voters who ultimately approved the measure did not know they were removing burglary from the list, the complaint says.

In 1968, the Legislature adopted another amendment that they passed on to voters to approve, that added murder and rape to the list of disenfranchising crimes, but again, the complaint states that "neither the resolution nor the ballot explained that they were not previously on the list."

Consequently, the rest of the list remained intact, as the attorney general affirmed in 2009. Two prisoners at the Mississippi State Penitentiary at Parchman challenged the section of Mississippi's Constitution listing the various disenfranchising crimes and lost despite the 5th U.S. Circuit Court of Appeals finding that "the state was motivated by a desire to discriminate against blacks," because the court also found that both the 1950 and 1968 amendments "removed the discriminatory taint associated with the original version."

Lawyers representing Harness and the two other plaintiffs disagree, pointing to the majority-white legislative makeup in both 1950 and 1968. Those two legislative bodies also passed discriminatory legislation that courts would later strike down because of their intent to "avoid desegregated schools," among other provisions. The lawsuit names Secretary of State Delbert Hosemann, McDuff said, because he is the state official responsible for maintaining a statewide list of registered voters. The secretary of state's office declined to comment on the lawsuit because it cannot comment on pending litigation.

'I Just Broke Down'

Harness lives in a Jackson apartment and has been sober since 2010, after seeking help from the Veterans Administration hospital for his addiction. Harness said he kept abusing drugs even after his release from prison because he was an addict when he got there.

"I can remember my last time using (drugs). I was smoking crack and smoking crystal meth and drinking whiskey and beer at the same time, and I just broke down," Harness said. "... I thought was going to kill myself, and I couldn't kick the habit on my own. I was miserable ... I told a friend of mine who took me into the VA."

Harness enrolled in rehabilitation in August 2010 and has been sober ever since. He entered a program for veterans called the Isaiah House, but his experiences getting help at the VA led him to seek further education in social work. He graduated with his baccalaureate degree in social work from Jackson State last spring and will complete his master's degree in social work in summer 2019, after receiving scholarship to continue his studies. Harness says he wants to help other veterans and Mississippians like him, who got caught up in addiction.

The 62-year-old said he is getting good grades in his classes, 95s and above, but he still cannot vote.

"I've been clean and sober going on eight years, and I am proud of that, and I would still like to be able to vote one day after I got myself together," he said.