Mississippians Sue to Get Voting Rights Restored After Serving Time 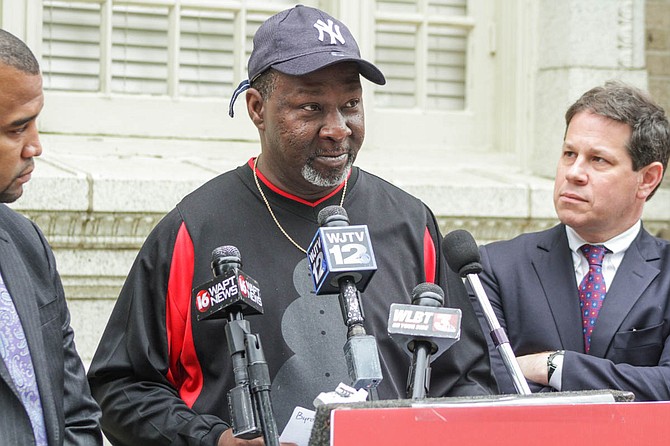 Byron Coleman is one of five named plaintiffs suing Secretary of State Delbert Hosemann for the state's laws that disenfranchise certain Mississippians from voting even if they have served their time behind bars. Photo by Stephen Wilson.

JACKSON — Wayne Kuhn completed his sentence for a grand larceny charge in the 1980s more than 25 years ago. He even got his record expunged—and yet he still cannot vote in Mississippi.

"God forgives us, but Mississippi doesn't," he said this morning outside the secretary of state's office, across from the state capitol.

Kuhn is one of five named plaintiffs suing Secretary of State Delbert Hosemann in his official capacity over the state constitution, which bars certain Mississippians from voting ever again if they have been convicted of one of the list of 22 disenfranchising crimes.

A recent study from the Sentencing Project, One Voice and the NAACP shows that the list affects an estimated 218,181 Mississippians. In an analysis of 2016 data, researchers found that 93 percent of those disenfranchised on Mississippi's list live in the community—not behind bars.

Kuhn and four other men named in the complaint, brought by the Southern Poverty Law Center and the Simpson Thacher & Bartlett law firm, seek to have their voting rights restored, but the complaint also challenges the process for suffrage restoration in Mississippi.

Jonathan Youngwood, one of the attorneys representing the class, noted that while state law says a person must get a suffrage bill to pass through the Legislature by a two-thirds vote of the House and the Senate, other guidelines make the process arbitrary.

"Once you've served your time, you need to get your right to vote restored," Youngwood said.

He said that states could bar voting for a time period, but barring some Mississippians from voting permanently is unconstitutional.

The list of 22 disenfranchising crimes includes a broad range of felonies from receiving stolen goods to murder. The list dates back to a time in Mississippi history when white lawmakers targeted black men for certain crimes, in an effort to limit their right to vote.

Byron Coleman, one of the plaintiffs in the lawsuit, said he was convicted of receiving stolen goods several years ago. That felony is disenfranchising in the state of Mississippi. Coleman said he had paid his debt to society.

"Before I leave this world, I would like my record to be clear," he said this morning.

A measure that would have directed lawmakers and state leaders to study disenfranchisement died this year in the Legislature. The SPLC lawsuit is a federal class-action case, which challenges the constitutionality of Mississippi's disenfranchising crimes list as well as its suffrage process.