Six Mississippians Get Voting Rights Back 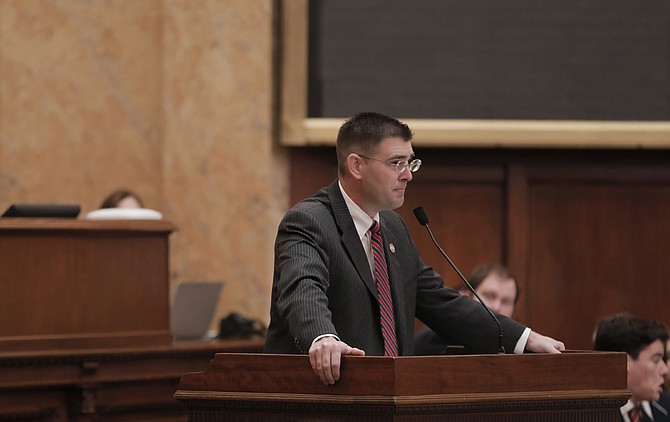 Rep. Andy Gipson, R-Braxton, brought out four bills for the House to vote on and restore Mississippians' voting rights this session; six Mississippians wait for the governor to sign their suffrage bills. Photo by Imani Khayyam.

JACKSON — Six Mississippians await the governor's signature in order to get their right to vote in the state restored. A person who has committed one of the 22 disenfranchising crimes in Mississippi loses the right to vote almost permanently—unless the Legislature passes a suffrage bill naming him or her. Disenfranchising crimes range from bigamy and felony shoplifting to rape and murder.

Rep. Andy Gipson, R-Braxton, introduced four suffrage bills in the final days of the legislative session, telling the House that his committee does not consider restoring voting rights to those who have committed crimes of violence or embezzlement. He said all four Mississippians have had clean records since they were released from jail or prison.

Mississippians looking to get voting rights restored must approach their lawmakers and ask for a bill to be drafted in most cases. Four representatives explained their bills on March 24. Rep. Sonya Williams-Barnes, D-Gulfport, introduced a bill to restore one of her citizens' voting rights. He was convicted in 1999 of grand larceny, but since his release, started attending community college, got a 3.9 GPA and is now enrolled at the University of Southern Mississippi.

"He has exemplified ideals of citizenship in participation in his community and his church," Williams-Barnes told the House on March 24. "He has been clean and has been working with others and encouraging them to lead the life that he has now."

The Senate introduced two additional suffrage bills that came of their Judiciary B Committee. Gov. Bryant must sign all six suffrage bills by April 20 in order to restore their voting rights.

Mississippi has the second-highest total felony disenfranchisement rate in the country, just behind Florida, a report from the Sentencing Project in October 2016 found. The report also estimates that the state has only restored voting rights to 335 Mississippians between 2000 and 2015.

Email state reporter Arielle Dreher at [email protected] and follow her at @arielle_amara on Twitter for breaking news.