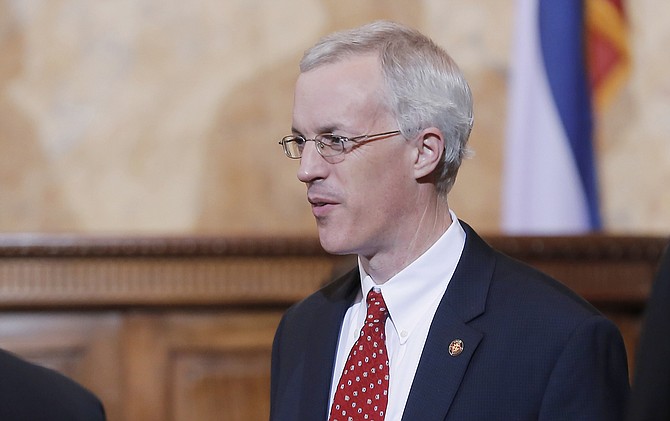 Sen. David Blount, D-Jackson, slammed the Senate majority for fully funding the School Recognition Program by putting their “thumb on the scale” to “reward the wealthiest districts in the state.” Photo by Imani Khayyam.

The Legislature did not fund the program last year, but this year the six lawmakers signed off on the $20.38 million needed to fund it. "A" and "B" schools receive $100 and $75 per pupil in average daily attendance under the program as well as any school that improves at least one letter grade in the 2015-2016 school year.

The extra funds must be used for salary supplements for teachers and staff—not administrators, state law says.

"That money actually comes out of our education program funds, so I would argue that it comes out of the General Education Programs (budget line) that money was put into," Tollison said.

Blount said the School Recognition Programs is designed to help districts that need it least. "The purpose is to put your thumb on the scale and reward the wealthiest districts in the state," Blount said.

He said that money should instead go to MAEP, which was originally intended to fund all schools equitably.

Sen. Hob Bryan, D-Amory, called for the Legislature to hold off re-writing the funding formula until it had conducted an open process for Mississippians to provide input on the new formula. The governor would have to call a special session to re-write the school's education funding formula before the 2017-2018 school year, but for now, the Legislature signed off on a budget to fund schools through MAEP.

The Legislature also cut millions of dollars from state health-care services, including the state's largest agency, the Department of Mental Health.

Democrats questioned the chairman repeatedly and consistently offered motions to send the health budget bills back for further conference—to hopefully add more funds or work on them further.

"We have a challenging budget this session ... we're not going to be able to find more money in this process, so let's move forward," Mims said in opposition to the motions.

Rep. John Read, R-Gautier, who chairs the House Budget Committee, said there is no more revenue to add to the bills. Addressing the struggling budget, Read told the House he's "never seen it this bad."

The Department of Mental Health's budget will see more than $10 million in cuts this year. Mims said the department would have some flexibility in how it handled the reduction in funding. Mims estimated that hundreds of positions are at risk but that the agency would start by not re-hiring into positions of those retiring.

Last week, Attorney General Jim Hood announced he had recovered more than $34 million mainly from settlements with Moody's Corp. In a statement, he urged lawmakers to appropriate $7 million of the funds for the mental-health department, which had to close its chemical dependency unit last year due to budget cuts.

Rep. Tom Miles, D-Forest, asked if budget writers had added those additional funds to the Department of Mental Health's budget, like Hood suggested.

Rep. Read said lawmakers used that money to plug current fiscal-year deficit holes in the Division of Medicaid's budget instead. The State still faces two federal lawsuits for its over-reliance on institutionalization in providing mental-health services, one focusing on children, the other on adults.