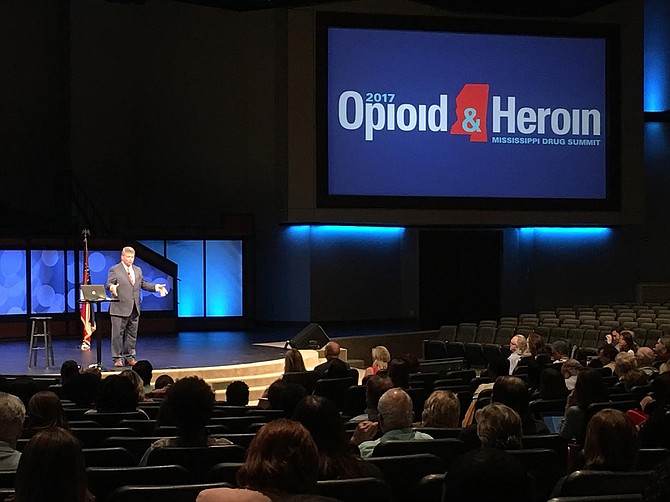 Attorney General Jim Hood called on the Legislature to fund the Department of Mental Health, which runs alcohol and drug services, to help prevent the opioid epidemic from spreading in the state. Photo by Arielle Dreher.

JACKSON — Attorney General Jim Hood believes he has been to several funerals of people this year who have died from opioid overdoses, but said today that no one talked about the cause. That needs to change, he said at the Mississippi Drug Summit Tuesday morning at Broadmoor Baptist Church in Madison. He and other state officials encouraged law-enforcement officials, mental-health practitioners, and lawmakers to collaborate to effectively curb opioid and heroin addiction in the state.

Hood said he has never seen anything like the opioid epidemic because unlike cocaine or meth epidemics, opioids affect a new category of individuals, he said.

"There's a new category of individuals who are addicted that cuts across all race lines, economic lines, age lines," Hood said this morning. "... (M)any of these people aren't ones that go out and start doing illegal drugs. They don't intend to get on drugs."

From 2013 to 2016, 563 Mississippians died after reported drug overdoses, a press release from the attorney general's office says. Eighty-five percent of those deaths involved opioids.

"In 2016 alone, there were 211 reported drug-overdose deaths, the highest in Mississippi's history," Mississippi Bureau of Narcotics Director John Dowdy said in a press release. "The numbers are likely much higher due to severe under-reporting by the state's coroners."

Mississippi Department of Public Safety Commissioner Marshall Fisher spoke briefly at the summit this morning and equated addiction to a disease, acknowledging that previous strategies to crack down on drugs by creating and enforcing more severe penalties did not work.

"Our solution to the crack-cocaine epidemic was to make more severe penalties for crack cocaine than powder cocaine, and it took us 25 years to correct that," Fisher said. "[I]t was a knee-jerk reaction, so we put a lot of African Americans in jail for the same crimes that Hispanics and Caucasians were doing with a different form of cocaine ... and that was wrong."

Fisher emphasized that, similar to the crackdown on cocaine, throwing money at the epidemic wouldn't fix the problem—and that getting to the root of the problem through collaboration is important.

Secretary of State Delbert Hosemann attended the summit instead of Gov. Phil Bryant who is out of the state on business. He acknowledged the Legislature's efforts in passing legislation in 2017 that allows pharmacists and doctors to administer opioid antagonists (drugs to counter an opioid) easily to help prevent potential harm from overdosing.

Hood blamed the national opioid epidemic on pharmaceutical companies misrepresenting to doctors and the medical industry that opioids weren't as addictive as opiates, leading physicians to prescribe them more commonly as painkillers. He said the Legislature turned a "blind eye" to funding mental health by giving away the state treasury to large corporations. He pointed out that the beds used at the Mississippi State Hospital at Whitfield for alcohol or drug addiction for men were closed due to budget cuts.

"This is a crisis that we are staring down. If we're smart, and if we prevent it ... it's much cheaper," Hood said. "Secondly, if we miss that attempt of prevention, then our treatment and rehabilitation is the next route, and that's going to take money."