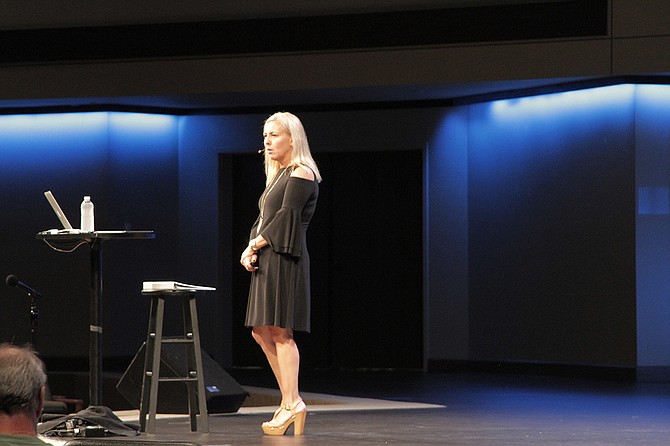 Marsha Stone, who runs an addiction recovery center in Texas, said Mississippi should look at increasing options for long-term recovery and care in the state for those addicted to drugs and alcohol. Photo by Arielle Dreher.

JACKSON — Marsha Stone made it out of college, but not without a drug and alcohol addiction she could not shake. She found herself at the age of 24 with three children and a husband who succumbed to his addiction and died.

She applied for law school, got in and graduated but still could not shake her addiction.

It was not until the Georgia Child Protection Services agency workers showed up at her doorstep that she realized she had to face her problem.

"I was suffering from a disease I had no control over," Stone said at the Mississippi Drug Summit last week in Madison.

Stone's children went to live with her mother, and she was de-barred from practicing law in her hometown in Georgia, where she said she had been recommending sentences for people that she could have received herself. Stone cycled through several recovery programs, but did not get the actual help she needed until she went into long-term recovery care.

Attorney General Jim Hood believes he has been to several funerals of people this year who have died from opioid overdoses, but said that no one talked about the cause.

In 2006, she started her own long-term care center in Texas, where she now lives, called Bringing Real Change Recovery. The program employs a social model of recovery that ideally lasts 15 months in order to keep former addicts from relapsing. Stone advocates for long-term care—as opposed to the typical and standard 30- or 90-day program—because research shows that the longer a person stays in care, the higher the chances they have of not relapsing.

"We have to stop thinking of (addiction) as a chronic illness but treating it as acute (or short-term)," Stone told the room of health-care providers, law enforcement officers and state agency workers last week.

The number of deaths related to drug overdoses in Mississippi continues to edge up. From 2013 to 2016, 563 Mississippians died to reported drug overdoses, a press release from the attorney general's office says. Eighty-five percent of those deaths involved opioids.

Gov. Phil Bryant formed a task force to address the opioid crisis in December 2016, and its recommendations will be ready to propose as legislation in 2018, Mississippi Bureau of Narcotics Director John Dowdy said. Early next month, the governor will have a chance to review the task-force recommendations. Dowdy could not give details on what would be included but said it involved treatment and prevention.

John Meynardi, a federal prosecutor in the narcotics division, spoke on a panel of lawyers at the Drug Summit. Meynardi said his office focuses on going after the big players: drug dealers, traffickers and occasionally doctors. He emphasized, however, that doctors are the ones unknowingly driving the opioid crisis.

Opioids are intense painkillers that are only prescribed for conditions like post-surgery and hospice care in Europe, one MBN agent told the Drug Summit last week. In the U.S., over-prescription of the drugs is common. Mississippi has the fifth-highest prescription rate of opiates in the country.

The task force's recommendations, Dowdy said, will include changes to Mississippi's various medical-board policies, in order to ensure doctors are not over-prescribing or prescribing opiates when they do not need to.

Tammy Reynolds, an MBN enforcement officer, spoke about the crisis in Mississippi and what she sees in her day-to-day work. She said a prescription for opioids costs around $75 at the pharmacy with insurance but between $1,800 and $2,500 on the street.

Consequently, if a person addicted to opioids cannot get them anymore, they turn to a cheaper drug instead: the highly addictive heroin.

"Heroin is much cheaper," she said.

District prosecutors who sat on a panel with Meynardi said they have not seen much heroin yet in their busts or prosecutions, but Meynardi predicted that they will soon as more opioid users turn to the drug.

"Heroin is coming. ... Until we deal with the demand, there's going to be a supply," he said.

Adam Moore, the DMH communications director, said that the average stay at a primary residential facility in the state is from 30 to 45 days and then transitional residential services can last an additional 30 to 90 days. The maximum length of stay varies depending on the program and the person, he said.

Stone's program in Texas lasts almost 15 months if residents choose to participant for that long, and she said this is important in order to be able to catch patients who might be about to relapse.

After three months in group homes, Stone said patients can then graduate to their own sober-living environment like apartments, where they still get tested weekly for drugs and alcohol but have a lot more independence.

Stone said the incremental model gives patients something to look forward to and move into. She said a year to 15 months of recovery, like what patients at BRC Recovery get, is ideal to keep people from relapsing.

"We've got to let go of the idea that acute, episodic treatment works," she said at the summit, adding that 50 to 69 percent of people in acute treatment will relapse.