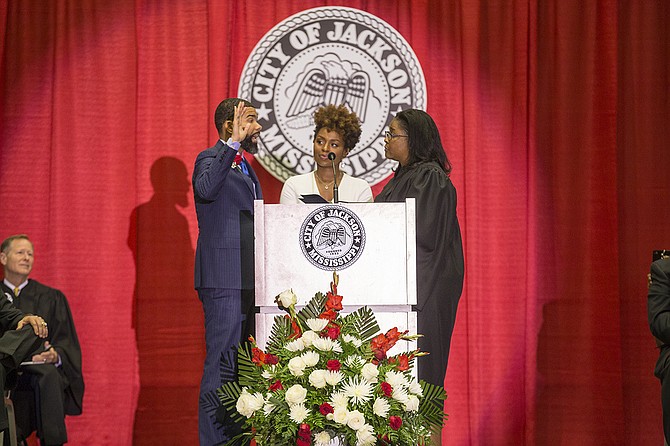 JACKSON — Standing ovations, joyful music, and resounding applause filled the Jackson Convention Complex this morning as the city council and youngest mayor of Jackson ever recited the oath of office.

Chokwe Antar Lumumba's face turned bright red as he attempted to hold back tears while giving his inauguration speech as the new mayor of Jackson, following in his father's legacy.

"As I stand on the very stage that my father stood on four brief years ago, I remember a man who was not only a model of fatherhood, but a person who embodied a relentless commitment to people," Lumumba, 34, said. "All people."

Lumumba reiterated his motto and platform of when he is elected mayor, so are the people of Jackson. Following his inaugural speech, the people of Jackson also took the People's Oath as they promised to assist with education, crumbling infrastructure and more of the new mayor's key points.

The program featured U.S. Congressman Bennie G. Thompson as the emcee and former U.S. Agriculture Secretary Mike Espy, who presented the welcome. Espy said that the Lumumba administration raised more money for this event than any other past Jackson inauguration.

Former Jackson mayors Harvey Johnson Jr. and Kane Ditto were acknowledged along with other special guests including city employees, state elected officials and the citizens of Jackson. Outgoing Mayor Tony Yarber, whom Lumumba defeated in the Democratic primary along with eight other opponents, did not attend.

The Unity Ball will complete the inaugural events; it is tonight from 7 p.m.- 11 p.m. The ball is formal and open to all adult citizens.