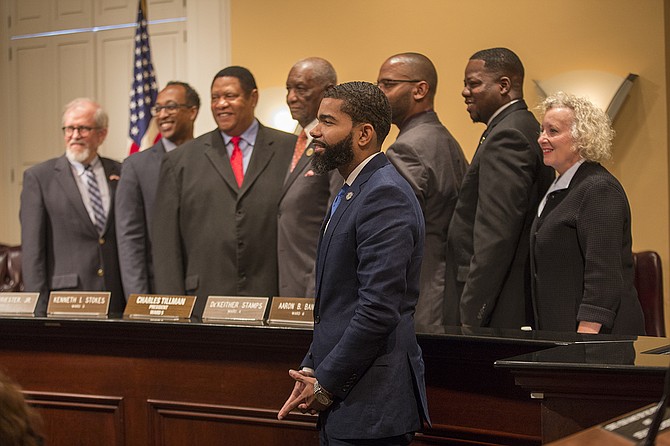 Mayor Lumumba greeted the body. "Welcome to your City Hall," Lumumba said. "This doesn't belong to any of us up here. This belongs to you."

At the beginning of the meeting, council members voted to name Ward 5 Councilman Charles Tillman president with Ward 2 Councilman Melvin Priester, Jr. as vice president. During Barrett-Simon's time on the council, Tillman was the second longest serving council member with 12 years. Preister was elected as a council member in 2013.

The council voted Tillman as president in 2013. In Februry 2014, Tillman was sworn in as acting mayor during his term as council president, following the abrupt death of the late Mayor Chokwe Lumumba, Sr. Preister, Jr. was named president in Tillman's place and Ward 4 Councilman De'Keither Stamps was named as vice president.

Lumumba appointed Safiya Omari as his chief of staff, Robert Blaine as chief administrative officer and Keyshia Sanders as constituent services director. Omari also served as chief of staff for Lumumba Sr. during his short term before his death.

The meeting, which is usually held on Tuesdays, was rescheduled due to the Independence Day holiday. Ineva May-Pittman, 83, mentioned that she arrived at City Hall yesterday morning, unaware of the meeting schedule change. Pittman announced her birthday and congratulated the new mayor along with many other Jacksonians during public comments.