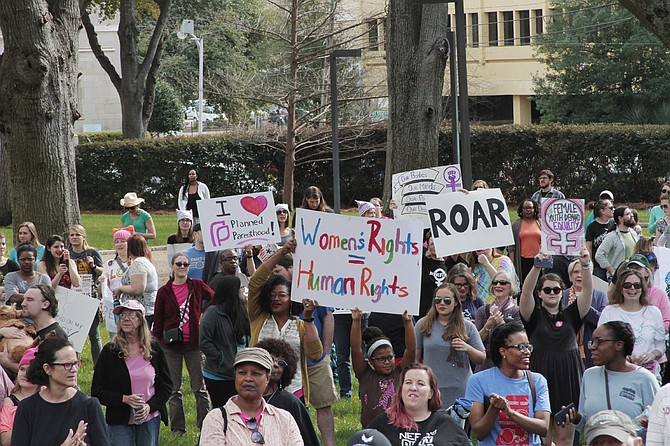 Hundreds of Mississippians gathered at the state Capitol the day after President Donald Trump's inauguration to participate in a sister march to the Women's March on Washington. Photo by Arielle Dreher.

JACKSON — Mississippi as the worst state for women based on several factors from life expectancy to unemployment figures, a new WalletHub study found.

The state has the highest share of women in poverty, it found, as well as the lowest life expectancy at birth for women. These findings match what U.S. Census Bureau data and other research show about women in Mississippi.

Status of Women data gave Mississippi an "F" grade for health and well-being as well as employment and earnings in 2015. Mississippi women are at high risk for heart disease, the report shows, with the highest mortality rate of any state.

Mississippi women also earn about 75 cents for every dollar a man earns in the state, which is similar to what a new study from the Mississippi Institutions of Higher Learning shows about Mississippi women who work full-time. That study says they earn approximately 27 percent less than their male counterparts.

Efforts to pass gender-pay legislation failed this legislative session, but State Treasurer Lynn Fitch, who is one of two women in elected state office, reiterated last week that it is not a political issue.

"It's a right-thing-to-do issue," the Republican treasurer said at the Stennis Capitol Press Forum last week.

The recent IHL study on the state's gender-pay gap found that the gap between men and women in pay after taking age, education, race and occupation into consideration is around 18 percent. "The portion of the gap not explained by observable characteristics are generally assumed to be due to discrimination, although as discussed later in the paper, it's not quite that simple," IHL reported. That is, a woman may choose a less high-paying and demanding job due to child-care decisions and other factors, which can account for part of the gap between what men and women earn in the state.