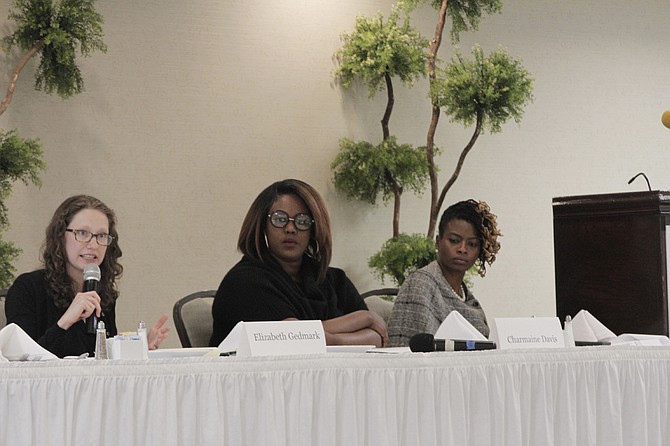 Elizabeth Gedmark (left), Charmaine Davis (middle) and Cassandra Welchlin (right) discussed women’s workplace rights, the pay gap and what is ahead for 2017 at the Women’s Economic Security Summit on Dec. 2. Photo by Arielle Dreher.

The group of community organizers, groups and nonprofits around the state will present one omnibus bill as well as a series of smaller legislative reform efforts in its second year of bringing women's concerns to lawmakers.

Cassandra Welchlin, the director of the Women's Economic Security Initiative, said the Mississippi initiative is the first of its kind in the South. The policy-reform efforts are focused on improving life for the more than half of women and girls in Mississippi who live in poverty and need targeted policies to support them, she said.

The 2016 Kids Count data from the Annie E. Casey Foundation show that 48 percent of children in Mississippi live in single-parent households; 36 percent of the state's children live in households with parents who lack secure employment, the same data show.

Census data show that 56 percent of all people in poverty in the state are women and girls. Welchlin said that Mississippi has one of the highest rates of single-mother headed households in the country.

The Mississippi Women's Economic Security Initiative hosted a policy summit on Dec. 2 at the King Edward Hotel to discuss national and state-level policy that could affect the lives of women living in poverty and single mothers in the state.

Elizabeth Gedmark is an attorney at Nashville's A Better Balance office, a New York-based nonprofit with offices around the country that represents families fighting for legislation guaranteeing paid sick leave.

At the summit, Gedmark said Mississippi does not have great protections for working parents or soon-to-be parents. For instance, women can be laid off for being pregnant or for potential pregnancy in workplaces with fewer than 15 people on the payroll, according to the federal Pregnancy Discrimination Act.

A lot of states have legally brought that threshold down for both the public and the private sectors Gedmark told the audience during a summit panel. "But Mississippi doesn't have that," she said.

Paid personal or sick leave time is also dependent on state laws and how federal regulations interact with those laws.

Small businesses in Mississippi are subject to federal paid personal and major medical leave according to federal law. A new 2016 directive applies to certain government contractors to give their employees paid sick leave after President Barack Obama signed an executive order back in 2015. A 2016 study from the National Federation of Independent Business found that 73 percent of the small businesses they surveyed already offered paid sick leave in some form for their employees.

The Family and Medical Leave Act entitles certain employees in the public and private sector in the U.S. to take unpaid medical or family leave for pregnancy, a new child in the family or a serious health condition. FMLA applies to private employers with 50 or more employees who have worked in 20 or more work weeks as well as all public agencies in local, state of federal government. Eligible employees must have worked a year for an eligible employer and at a location where the employer has at least 50 employees within 75 miles.

A recent Pew analysis shows that the United States is the only nation that does not require paid maternity leave on a list of 41 countries including mainly European and Western countries.

Pushing paid sick leave has worked at a state level elsewhere, with bi-partisan support. In November, Washington state and Arizona both passed ballot initiatives raising the minimum wage and mandating paid sick leave for both the public and the private sector. Arizona's initiative will entitle employees to one hour of paid sick time for every 30 hours worked, with limits based on "the size of the employer."

Mississippi law allots paid personal and major medical leave to Mississippians employed by the state, depending on how many hours they have worked or accumulated over time. Those rules do not apply to the private sector in the state; however, some federal regulations might apply to private employers in the state.

Paid sick leave would especially help single mothers who could have to make the choice between sending their sick children to school or staying home and losing pay—or at some extremes, potentially losing their jobs, Gedmark said.

Charmaine Davis, the southeast administrator of the Women's Bureau in the U.S. Department of Labor, said the country's labor laws were designed to accommodate the largely male work force of the 1950s. Today's work force, however, is almost 50 percent female, Davis said.

Women earn up to 83 cents per one dollar a man makes in the United States, but that varies vastly depending on the field, U.S. Bureau of Labor data show. In the legal field, for instance, women make 55 percent of what their male counterparts earn nationally. The Lily Ledbetter Fair Pay Act of 2009 made it easier to legally challenge unequal pay under the Civil Rights Act of 1964 but did not mandate equal pay. Advocates at the summit said work is needed at state and local levels to ensure that women have fair pay and sick leave.

Davis worked on the "ban the box" campaign in Atlanta, Ga., which sought to eliminate the question on employment applications asking a person's previous experience with the penal system, thus making it harder to get hired.

"There's an important role that we as women in the South play; we set the bar on the federal level—they can look and say (hypothetically) in Mississippi they are actually passing an Equal Pay Act," Davis said. "We in the South can shame the federal government into doing something."

Welchlin said that because half of Mississippi's work force consists of women, the state needs to help those workers so they can continue to stay employed and provide for their families.

"We want to be able to provide supports to those women in regards to their family so they can get out of poverty," Welchlin told the Jackson Free Press.