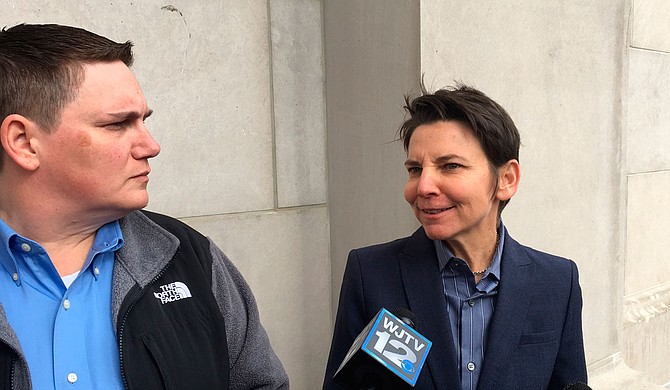 JACKSON — Christina and Kimberly could not get married in Mississippi in 2009. Same-sex marriage was illegal at the time and would be legal until 2015, so the couple went to Massachusetts to get married. They adopted their first son in 2007 before they were married, but after their marriage in 2009, they wanted to have a child of their own.

For same-sex couples, this can mean using assisted reproduction technology. The couple decided on a sperm bank in Maryland, and Kimberly decided to carry the child. She received insemination treatments in Louisiana and gave birth to the couple's son, called Z.S. in court documents, in 2010. 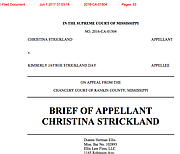 Later the couple separated, but Christina Strickland was never named a legal parent of their son, Z.S. Her attorney, Elizabeth Littrell, argues that this is in part because the State of Mississippi discriminated against same-sex couples at the time. Only Kimberly Day, who has re-married, is listed on the birth certificate.

During the divorce, Strickland was awarded visitation—not custody—of the couple's two sons as well as a status called "in loco parentis" which gives her some responsibilities of a parent, still short of legal parenthood.

In October 2016, Rankin County Chancery Court Judge John Grant, while granting their divorce, ruled that the marriage of the mothers was not the pivotal issue—instead focusing on the conception of the child and his father.

" ... The Court finds two women cannot conceive a child together," he continued. "The Court does not find it (sic) opinion to be a discriminatory statement but a biological fact. The court reasons it is impossible for two women to conceive a child and that conception must occur between a man and a woman. That the Court therefore concludes that Z is a child born during the marriage, not of the marriage, because the conception of Z is impossible between two females."

Strickland appealed to the Mississippi Supreme Court after the ruling, and Littrell told justices last week that Strickland wants the court to reverse Grant's decision and declare Christina a legal parent of Z.

Not even two minutes into Littrell's presentation, Chief Justice Bill Waller asked her why the State was not a party in the case if Christina wanted to be added to the birth certificate.

Littrell argued that her client was not asking to be added to the birth certificate but instead asking the court to recognize that Z was born into a legal marriage with two legal parents.

"The law of this state recognizes parentage as a benefit of marriage, irrespective of whether or not the husband is listed on the birth certificate," Littrell said.

She argued that Christina would have been on the birth certificate if Mississippi did not discriminate against same-sex couples at the time.

"The state was discriminating against her and this family at the time by laws that have since been struck down should not justify continued discrimination," she said.

Littrell said that the Mississippi Supreme Court's ruling in the case could affect thousands of children in the state born to same-sex and opposite-sex couples who use assisted reproduction technology to have children.

"We are talking about children who are born to married couples. Do they have the right to two parents, or are we going to treat them as illegitimate?" Littrell argued before the court on Nov. 29. "... The court is empowered to recognize a common-law rule that says when children are born to a married couple that used assisted reproduction and anonymous donated sperm, those children are deemed in law legitimate. And there are a number of sister courts, where there is no statutory guidance, that come to this conclusion that protects the family, protects the child, that ensures that the child doesn't become a ward of the state." 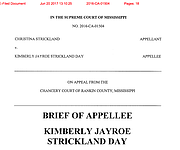 Z will not become a ward of the state in Christina and Kimberly's particular case, Justice Michael Randolph pointed out, but Littrell argued that allowing Judge Grant's ruling to stand is an "inherently unjust and unnecessary result."

Prentiss Grant, who represented Kimberly in the arguments, told Supreme Court justices that Christina did not use a legal tool that he says could have remedied her parental-rights predicament. Grant argued that the case was not about what artificial reproduction means around the country but instead about following state law regarding the procedure.

"To me the best way to do that is to require all artificial insemination or artificial techniques to be treated the same as any adoption case: you terminate the donor," Grant told the Mississippi Supreme Court.

This would mean Strickland would have to issue a public notice trying to find the sperm donor, whom the couple knows only as Donor No. 2687, to give him an opportunity to exert his parental rights—even though Littrell told justices that Kimberly had to sign an agreement that she would never seek to identify the donor.

"So what your argument is is that common sense says a male and female are the only ones that can produce a child, so we need to treat same-sex couples differently, that's what you're saying?" Justice Beam asked Grant.

"No, your honor, because in my opinion, if you have a same-sex or opposite-sex couple that uses either a donor sperm and(/or) donor egg, then both of those couples need to terminate the donor's rights and either adopt the child or be acknowledged, because what you have is in this case, they talk about he's unknowable, he's un-findable—the sperm donor—all they had to do was serve him by publication, your honor," Grant said.

Beam also said the ruling in the Pavan v. Smith appeal to the U.S. Supreme Court, which said Arkansas' law that "require(d) the placement of the birth mother's husband on the child's birth certificate" violated the Obergefell decision, also affects the case. That ruling essentially signaled to lower courts that Obergefell applied to birth certificates in Arkansas and elsewhere. Grant said it is up to the Legislature to change the part of state law that says a father cannot terminate parental rights if a child is conceived by artificial insemination.

"The decision in the enacting of 93-9-10 that says the father cannot disestablish paternity should be changed by the Legislature to include everybody," Grant said.

"Now I do argue that we've got to look at a way to treat everyone right under the Equal Protection Clause, everybody has got to be treated the best we can, the same ...," Grant said.

"... and the children above everybody else because they don't have anybody speaking for them, right?" Beam interjected. "So is it right to bastardize that child?"

Grant said no, but returned to his argument that Christina and other parents in similar situations could terminate the sperm (or egg) donor's parental rights and then become legal parents.

The U.S. Supreme Court issued their opinion in the Pavan case after Judge Grant granted his divorce judgment for Christina and Kimberly, so the Mississippi Supreme Court will have to decide how to apply Obergefell and Pavan to Strickland's case.