After Same-Sex Marriage Victory, A Stall on LGBT Divorces in State 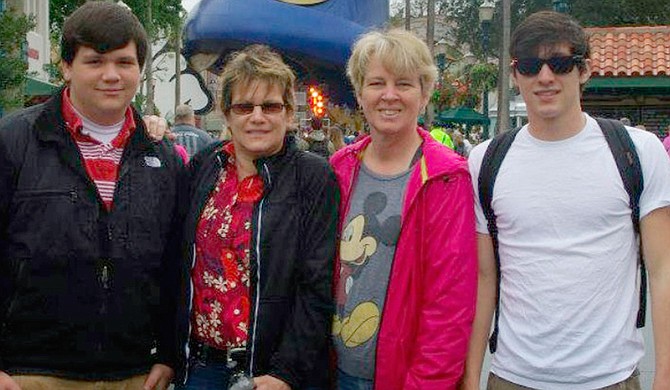 Lauren Beth Czekala-Chatham cannot put her past behind her, because a court won't let her. After the Obergefell v. Hodges decision this summer—the U.S. Supreme Court case that made history when it legalized gay marriage—marriage is supposed to be legal and recognized regardless of two partners' genders. But while same-sex marriage in Mississippi is legal, same-sex divorce seems to be on hold—at least it is for Czekala-Chatham and any other couple in the state whose judge is awaiting the Mississippi Supreme Court's decision in her case.

Czekala-Chatham filed for a divorce from her wife, Dana Melancon, and is still waiting for the Mississippi Supreme Court to recognize it. When she filed for divorce in 2013, it was an uphill battle, asking a state where same-sex marriage was illegal at the time to recognize her marriage in order to end it. Following the June 26 U.S. Supreme Court decision, however, all states were forced to recognize same-sex marriages. The ruling did not, however, specifically address the issue of divorce.

It's been four months since Czekala-Chatham's attorney and Jim Hood's office both filed motions for entry of judgment, asking the Mississippi Supreme Court to reverse a previous DeSoto County chancery court's ruling and grant the couple a divorce. But the Mississippi Supreme Court has still not ruled on Czekala-Chatham's case—a silence that she says is hurting her in more ways than one.

"We're still not getting equal rights," Czekala-Chatham said. "(They say) we got what we want, but it's not true; we're still fighting."

After she split with Melancon in 2010, Czekala-Chatham moved to Hernando, Miss., and continued to raise her two sons as a single mom. She did meet someone new and has been with her current partner, Dawn Miller, for three and a half years. Czekala-Chatham said she wants to marry her partner, and they would like to become foster parents. Beyond these personal considerations, the case has taken a financial and emotional toll on her as well.

Czekala-Chatham lost her job in 2014, and she has yet to find a new one despite her 26 years working in accounts payable and business finance. She has surmised from questions in job interviews that as soon as employers search her name on Google, they learn about her case.

"I know (it) when I'm in the interview, (and) they'll say things like 'We're a family-owned corporation' or 'We have family values here,'" the implication being that because she's gay, family values don't apply to her, she said.

Czekala-Chatham said she recognizes how her case will hopefully help other LGBT couples in Mississippi get divorces quicker, but she admits this process has come at a high price.

"It's not just about the divorce. We're human beings, too, and we're mothers, sisters, daughters," Czekala-Chatham said. "We put our clothes on the same way as you do, and we have the same dreams."

But like half the marriages in America—and Mississippi's divorce rate is traditionally higher—theirs did not last. The couple separated in 2010, but were still married. This arrangement worked for a while until Czekala-Chatham realized she was losing money from taxes that the federal government took from them as a married couple—money she needed to help raise her two sons.

In 2013, Czekala-Chatham filed for divorce in Mississippi. She said filing it in Mississippi was the easiest and most convenient move since flying to California and hiring an out-of-state lawyer would have been time-consuming and expensive.

Her two sons were in public schools in DeSoto County, and she was still living her life as a single mother. Early in the lawsuit, Czekala-Chatham and Melancon settled their division of property, but they were denied a divorce.

Her divorce filing turned into national news when she appealed her case to the Mississippi Supreme Court, and prior to the Obergefell ruling, Attorney General Jim Hood and Gov. Phil Bryant had both filed notices to dismiss Czekala-Chatham's case in 2014.

Bryant's amicus brief echoed his resistance to legalize same-sex marriage in the state. "Mississippi is free to define and recognize marriage only as the union of a man and a woman," the 2014 brief states. "To declare otherwise would turn state sovereignty on its head, transforming licenses of every kind into interstate privileges that ignore the public policy of any other jurisdiction."

Less than a year later, the U.S. Supreme Court legalized same-sex marriage nationally, and in Czekala-Chatham's mind, the Obergefell ruling means her divorce should be granted, according to federal law.

It's been four months since those motions were filed, and the Supreme Court has yet to hand down a ruling in Lauren's case, holding up not only her life but potentially the lives of others in same-sex marriages in the state seeking divorces.

Czekala-Chatham said she has received Facebook messages from other same-sex couples throughout the state whom judges have told that they are waiting on the Mississippi Supreme Court's ruling before issuing divorces. (Supreme Court justices and staff do not comment on pending litigation.)

Glen Gregory, a Madison County resident, said his divorce has been put on hold because the Madison County judge in his case does not want to issue a ruling without the state Supreme Court ruling on it first.

Gregory and his partner have been separated since 2010 and had to file for divorce in Mississippi where they both live because they were married in Connecticut in 2009, a state that requires six months of residency to file for divorce. Gregory said he and his separated partner are on good terms, but both are ready to finalize the divorce.

"We've both moved on, once we saw we could do this—we moved forward with it," Gregory said.

But they were stopped when the judge said he had reservations about ruling before the state supreme court had ruled on the issue.

Carey R. Varnado, Czekala-Chatham's attorney, said he'd initially expected a short opinion or order a couple weeks after the Obergefell ruling. Varnado said the delay might mean that one or more members of the Mississippi Supreme Court are writing full opinions concerning the issues involved in the case. Czekala-Chatham has no other option but to wait for the court to rule, and she cannot file for divorce elsewhere.

"She has no (other) way to get a divorce from the courts of Mississippi," Varnado said.

Technically, the Mississippi Supreme Court has 270 days to issue a ruling from the filing of the final brief—so they are not late. The Supreme Court hands down rulings on Thursdays; as of press time, no orders had been issued in the case.

Matt Steffey, a professor at the Mississippi College School of Law, said it is not unusual for cases to draw out this long but agrees with Varnado that this might mean the ruling will be more than one or two sentences long.

Steffey said he would be alarmed if the Mississippi Supreme Court went against the Obergefell ruling, because that would go against their mandate and oath they take when sworn onto the court to follow the law of the land—in this case the U.S. Supreme Court's ruling.

"The only time that the rule of law matters is when it requires citizens and especially judges to follow laws that they disagree with," Steffey said.