Gov. Bryant Has Problem with Universities Taking Down the State Flag 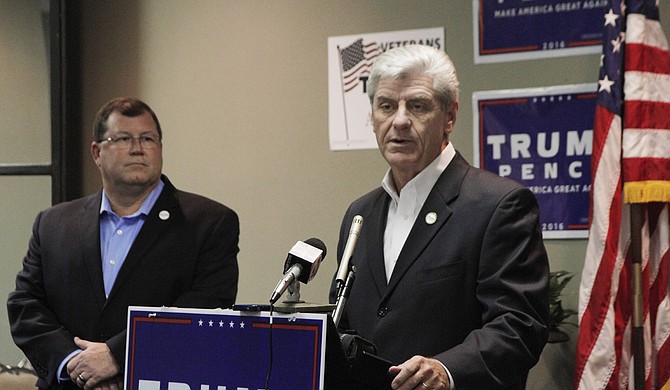 Gov. Phil Bryant told reporters he has a problem with universities taking down the Mississippi state flag because it sends the message to students that universities can ignore the state code. Photo by Arielle Dreher.

Gov. Phil Bryant told reporters Tuesday that he is concerned over state universities taking down the state flag, though, mainly due to concerns about following state law.

"Whether you like the flag or not, the state law and code currently says that the Mississippi flag should be treated with the same etiquette and respect as the Untied States flag," Bryant said after opening the Trump campaign office at the Mississippi Republican Headquarters in Jackson. "I think what's happening at universities is that they're sending messages to students that you can ignore the state code. There may be portions of the code that I don't like, but I abide by it."

If the law said, "shall be displayed," public entities would not have a choice as to whether or not to display the flag. The law does goes on to say that "[t]he state flag shall receive all of the respect and ceremonious etiquette given the American flag." So while state law doesn't require public buildings to fly the flag, it does require that people be nice to the state flag.

Bryant acknowledged this on Tuesday.

"It is not a punishment (to not fly the state flag) in that statute, but it clearly says you should treat the state flag with the same respect and etiquette, and they're just simply not doing that and for presidents of universities to ignore the state code is troubling," he said.

Bryant has long advocated for a ballot referendum to decide the state flag issue, allowing Mississippians to vote for a state flag or an alternative and said that it would have been a great year to have it on the ballot. Other high-ranking state officials advocate for changing the state flag in different ways. House Speaker Philip Gunn advocated for legislative action this summer at the Neshoba County Fair. He told the Jackson Free Press in July that the Legislature would be a better venue to change it, in his opinion, but acknowledged the need for votes to pass it.

"The redesign of the north campus grounds required removing a flag pole and the decision was made at that time to not replace the state flag," Borsig said in a statement.

Delta State University is the only public university left in the state of Mississippi still flying the state flag, but the AP reported that Delta State spokeswoman Jennifer Farish said that 3,500-student university would remove the flag if President Bill LaForge's cabinet, which includes faculty, staff and student members, votes to do so.

"Delta State continues to fly the State flag out of respect to our relationship with the State of Mississippi, and despite our disagreement with symbols that cause an unfortunate barrier to understanding," Farish told the Associated Press.

To read more about Mississippi's state flag and its history, as well as Bryant's position on the flag and Confederate Heritage Month, visit jacksonfreepress.com/slavery.