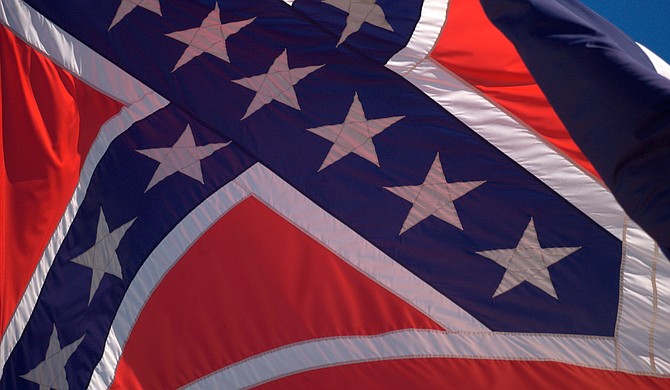 In Mississippi, both politicians and public figures are making statements for and against changing the state flag, some claiming that it's an issue that voters already addressed in a 2001 referendum. Photo courtesy Flickr/Stuart Seeger

JACKSON, Miss. (AP) — In Mississippi, the last state to display the Confederate battle emblem on its flag, some lawmakers want the divisive symbol removed, others want to punish public institutions that refuse to fly the banner and a state House leader suggests having two separate but equal flags: one with the rebel cross and one without.

Old South symbols have come under widespread scrutiny since last June, when a white man who had posed for photos with the rebel flag was charged with killing nine black worshippers at a church in Charleston, South Carolina. Eight months after that massacre, Mississippi lawmakers remain deeply divided over their state's banner.

Several say it's is an offensive reminder of slavery and segregation. They propose replacing it with stars or a magnolia, the state's official tree and flower.

Others say Mississippi's 122-year-old flag represents history and heritage, and they propose stripping state funding from universities or local governments that refuse to fly it.

Republican Gov. Phil Bryant says withholding state money is a bad idea. But he says voters, not legislators, should decide on the flag.

Speaker Pro Tempore Greg Snowden, the House's second ranking leader, proposes having two state flags with equal status, so people could fly whichever one they want — the current flag or an historical flag with a magnolia tree in the center.

"My daughter and her family live in Texas. You go out there and there's a Texas flag on every corner," said Snowden, a Republican from Meridian. "You don't see that in Mississippi."

The Charleston shootings prompted South Carolina legislators and Gov. Nikki Haley to remove a Confederate battle flag from the Statehouse lawn. Even before they acted, Mississippi House Speaker Philip Gunn became the first prominent Republican in his GOP-dominated state to say Mississippi should consider changing its flag.

"As a Christian, I believe our state's flag has become a point of offense that needs to be removed," Gunn, a leader in his local Baptist church, said in June.

Since then, however, Gunn has mostly been silent on the issue.

For any flag proposals to survive this year, they must advance quickly. If bills aren't brought up for a committee vote by Tuesday, they die.

Meanwhile, rival groups are gathering signatures on petitions — one that would enshrine the current design in the state Constitution, and another that would remove any trace of Confederate symbolism from the banner. Neither measure could be on the ballot until 2018.

The Mississippi Supreme Court ruled in 2000 that the flag, while widely used, had not been officially recognized by state law since code books were updated in 1906. In the fall of 2000, a flag commission held several hearings that devolved into shouting matches.

Legislators put the matter to a statewide vote in April 2001. By a nearly 2-to-1 margin, voters chose the old flag over an alternative that would have displayed circles of stars representing Mississippi as the 20th state.

Since the Charleston massacre, some Mississippi cities, counties and universities have stopped flying the state flag.

Republican state Rep. William Shirley of Quitman said that became a hot topic of conversation at his catfish restaurant when the University of Mississippi stopped flying the flag. The consensus, he said, was that any school that takes state money should fly the flag. Shirley is now sponsoring legislation to pull state money from universities, community colleges or local governments that don't fly the banner.

"Whatever our flag is, I think public institutions or people that get government dollars need to fly whatever that is," said Shirley, who supports keeping the Confederate emblem.

Asked about efforts to change the flag, Shirley said: "Where do we stop? What's next?"

Several African-American lawmakers, including Democratic Sen. Hillman Frazier of Jackson, propose replacing the current flag with the historical magnolia flag — the design Snowden proposes as a second flag. Although Mississippi used the magnolia flag during the Civil War, Frazier said he believes it would be widely accepted in the state with a nearly 38 percent black population.

Gov. Bryant told The Associated Press on Wednesday that he still believes if the flag must be reconsidered, the current design and an alternate should be put on the ballot this November.

The governor said he opposes pulling state money from schools, universities or other public entities that shun the flag. That would only hurt young people who are trying to get their education, the governor said.

"I'd rather not punish them for something that has a simple solution," Bryant said. "And that solution should be, put it on the ballot and let the people decide."

Frazier, who served on the flag commission in 2000, said another flag vote would divide Mississippi. He said legislative leaders should adopt a new flag and Bryant should sign it into law: "They ought to take a page out of Gov. Haley's book in South Carolina and do the right thing."