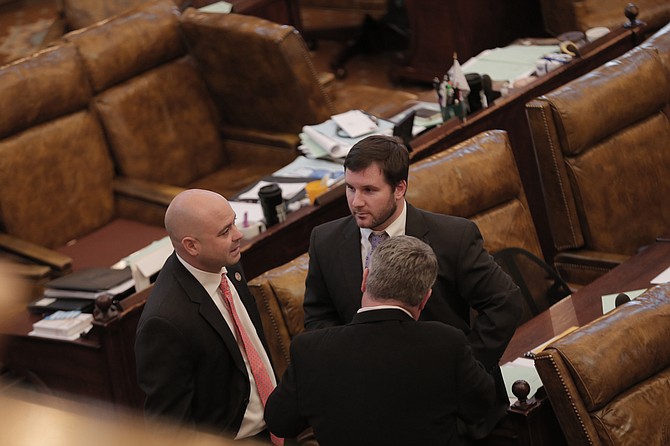 Rep. Trey Lamar, R-Senatobia, is pushing for a solution to the State of Mississippi’s loss of revenue from online retailers using a tax loophole. Time for an “Amazon tax”? Photo by Imani Khayyam.

JACKSON — In the state's never-ending search for revenue—and as corporate and individual income-tax cuts loom—lawmakers are looking to shift the state's tax code, all while not losing revenue in the process.

How exactly Mississippi's tax code will shift is largely in the hands of the Republican supermajority in the statehouse and the tax panel that Lt. Gov. Tate Reeves and House Speaker Philip Gunn direct.

Thus far, the suggestions of Nicole Kaeding, an analyst from the conservative-leaning Tax Foundation, are largely steering the panel. Sen. Juan Barnett, D-Heidelberg, asked Kaeding last week why encouraging an Internet sales tax is not a part of her plan.

"I feel like that's a tax that should be included because I think that takes a lot of money out of our state," Barnett told the tax panel.

The State is losing millions of dollars by not collecting sales and use taxes on e-commerce purchases. But the problem is complex. Mississippi does have a use tax, which, as defined by the Department of Revenue, is tax on personal property acquired in any manner for use while living in Mississippi, if a resident has not already paid sales or use tax on it in another state at an equal or higher rate.

Mississippi has the second-highest sales-tax rate in the nation (tied with several other states) at 7 percent, which means that most of the time, items bought out of state come with some kind of use tax. States everywhere have struggled with how to collect this tax, however, particularly on sales from online retailers.

Use tax made up $226.5 million or 4 percent of the general fund revenue in fiscal-year 2015. Businesses that have a physical presence in the state, including an online retailer with a warehouse here, must collect the state's sales tax. Kathy Waterbury at the Department of Revenue says Mississippi has about 1,000 voluntary collectors of sales tax, with no presence inside the state that contributes close to $20 million annually. A 1990s court opinion set that standard, and many lawmakers believe it is time for change.

Enforcing the payment of the use tax, at least so far in tax-panel discussions, seems to have bi-partisan lawmaker support. Rep. Trey Lamar, R-Senatobia, asked Kaeding repeatedly last week to defend why the Tax Foundation does not support states looking to create such taxes.

"The position of the Tax Foundation is that, particularly when we're talking about purchases on the Internet, we really need a (national) solution for this problem and not a solution of the states," Kaeding told lawmakers last week.

She pointed to the 10,000 tax jurisdictions around the country, created by county, municipal and state taxation, as well as the interstate commerce rules that make enforcing the use tax—or creating laws to force online retailers to collect sales tax—complicated.

The Tax Foundation supports tax breaks for businesses, however. They've suggested that Mississippi speed up the phase-out of the corporate franchise tax and eliminate any taxes it forces on business transactions outside the final product.

Lamar wants to enforce the use tax on online purchases, as other states have done. He said Mississippians are saving money by ordering online—and not reporting their use tax in April on their returns.

"People aren't doing that because they're saving 7 cents; they're doing it because they don't have to drive somewhere and go in a store and shop," Lamar told the Jackson Free Press. "The more and more people do that, the less and less we're collecting in actual sales tax to support the state's budget."

"We're making them do something (charge and collect sales tax) that we don't make somebody in California or New York (operating an online or mail order business) do, and it puts them at a competitive disadvantage," Lamar said. 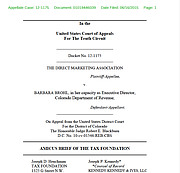 In Alabama, an "Amazon tax" law is set to go into effect this November, AL.com reports. South Dakota has sued online retailers for not collecting the tax, and in Colorado, the 10th U.S. Circuit Court of Appeals upheld the state's Amazon-tax law.

The Direct Marketing Association sued Colorado's Department of Revenue based on their law, claiming it posed an undue burden on interstate commerce.

The lower court agreed with the association, but the 10th Circuit disagreed. That court ruled that the Quill v. North Dakota case, which set the physical presence standard, is not "controlling."

Kaeding and others believe differently. She told lawmakers last week that Congress or the courts would best resolve the issue. The Tax Foundation submitted an amicus brief in the Colorado case, asking the court to side with the Direct Marketing Association and strike down Colorado's law, affirming the lower court's decision.

"Colorado's Challenged Statute, if upheld, will be used to justify statutes and ordinances across the country, smothering the internet and direct mail industries in compliance costs," the June 2015 brief says.

Lamar and other lawmakers disagree. He said he is not married to a particular solution but wants the problem fixed. "This might not be a popular thing to say, I don't want to pay any more taxes either ... but it's the right thing to do, and it's right for the state," he said.

When asked about the online sales tax idea, House Speaker Philip Gunn responded with an emailed statement. "As I have said from the beginning, we are evaluating the entire tax structure. We've made no firm decisions on anything, but all options are being looked into during this process," Gunn wrote.

Use tax makes up around 4 percent of the state's general-fund receipts. Sara Miller, senior policy analyst at the Hope Policy Institute, said enforcing the use tax is not equivalent to adding a new tax just because Mississippians are not paying it.

A 2009 University of Tennessee study estimated that, from that year to 2012, Mississippi lost about $616 million in state, local sales tax and use tax due to e-commerce. Those estimates are conservative. Miller says the State could use the extra revenue, and that the tax would likely be equitable in nature.

While enforcing what is often called the "Amazon tax" might be more equitable, Miller said the state's overall tax structure is not, as sales tax makes up 38 percent of the state's general fund.

"Mississippi's tax system is regressive ... (it places) the higher burden on low-income folks," Miller said. "Then you also have historical problems of not being able to fund state services in a way to get us off the bottom."

Forcing online retailers to pay use tax may help, Miller said, but it won't solve all the state's financial problems.