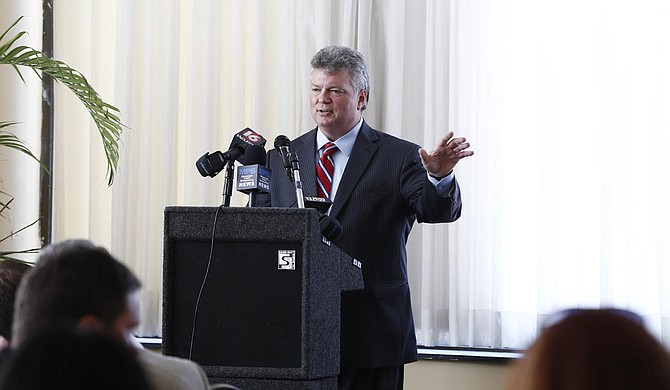 Attorney General Jim Hood joined 10 states in asking the U.S. Supreme Court to re-consider existing law that prevents states from collecting sales tax from retailers with no physical presence in the state. Photo by Imani Khayyam.

JACKSON — Lawmakers who support closing the online sales-tax loophole, also called the Amazon tax, might get their wish through the courts. Attorney General Jim Hood has asked the U.S. Supreme Court to review a 1992 decision, Quill v. North Dakota, which prohibited states from implementing online sales taxes on businesses not physically located in the states themselves.

Mississippi is one of 11 states asking the high court to hear arguments in the second round of the Brohl v. Direct Marketing Association case. The first case resulted in a big win for online retailers—the 2015 court ruling that said they were not required to send reports to Colorado's revenue department.

Now, some states want the high court to reconsider the ruling, which reiterated the "brick and mortar" rule, saying retailers with a physical presence in a state had to collect sales taxes, while those with no physical presence did not.

"More and more, the marketplace is moving from Main Street to the Information Superhighway, and our local merchants are at an unfortunate disadvantage," Hood said in a press release. "If local stores are unable to compete with out-of-state online retailers, we lose jobs, an important tax base and a critical investment in our communities. We're asking the Supreme Court to even the playing field for merchants and to allow the states to gain the revenue that should be due to them."

Both Republican and Democratic politicians discussed closing the Amazon tax loophole in the state during recent joint legislative tax policy panel discussions. Alabama's "Amazon tax" law is set to go into effect this month, and at least 13 other states have laws that allow the government to levy those taxes, the press release from Hood's office says.

"Courts in New York have upheld this type of tax, and I will be asking the Legislature to stand up for our local businesses and adopt a similar tax next year," Hood said in a press release. "I also remain hopeful that the brief we filed today will move the Supreme Court toward opening the door for states to collect sales tax on all Internet sales."

In a state with little revenue to work with, lawmakers are looking for additional ways to generate revenue. A 2009 University of Tennessee study estimated that, from that year to 2012, Mississippi lost about $616 million in state, local sales tax and use tax due to e-commerce. Those estimates are conservative, analysts say.

Attorney General Hood said in the press release that a sales tax on online purchases would especially benefit Mississippi because ongoing budget problems have led to layoffs and service reductions across state government. Hood called on the Legislature to enact an Internet sales tax to help balance the budget and support local merchants.