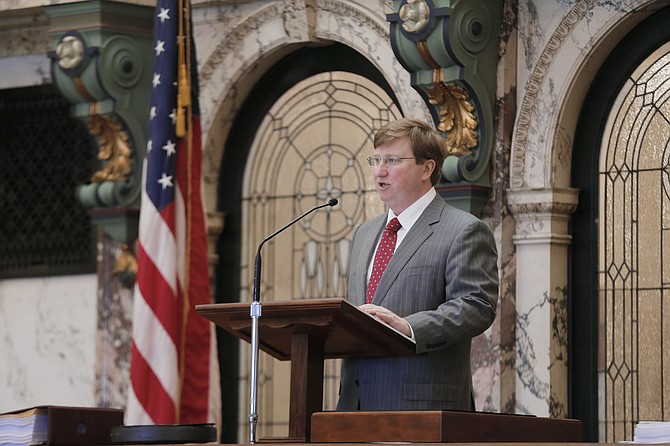 Lt. Gov. Tate Reeves killed a bill that would have diverted online sales tax collections to the state’s infrastructure needs—despite lagging revenue and tax collections in the new year. Photo by Imani Khayyam.

The state's budget is shrinking, and whether a lawmaker blames slow economic development or large tax breaks given to corporations that never came to Mississippi, the budget squeeze is on most legislators' minds this session. They are grappling with how to deal with slow revenues and tax collections while simultaneously trying to add funding for education, roads and bridges. Where new revenue can come from is largely a political debate, but the House of Representatives managed to get bi-partisan support for a sales tax on all online purchases made in the state. The collections generated by the legislation would have gone toward the state's infrastructure. Then the Senate got the bill, and in the name of the Constitution, Lt. Gov. Tate Reeves killed it.

Alabama and several other states have started collecting the tax, sometimes called the Amazon tax, bucking a 1992 U.S. Supreme Court decision that told states they could only collect such tax on brick-and-mortar retailers. Tax-free online sales is frustrating for local retailers who must collect sales taxes, charging more for items that Mississippians can get online right now without sales taxes.

"Because the Supreme Court made it clear 25 years ago that states do not have the authority to tax Internet sales, this bill is unconstitutional and any promised new revenue is simply fake money," Reeves announced in a press release.

In a classic state's rights-versus-federal control argument, Mississippi almost always goes for state's rights—except when it comes to collecting revenue it needs for very basics like roads and bridges.

The Mississippi Department of Revenue even brokered a deal with Amazon in February to start collecting the tax. Pressure from outside forces, however, is rampant at the Capitol this year. Americans for Prosperity, a conservative Koch-brother nonprofit creation, is picking up steam in Mississippi. Last week, they rallied at the Capitol with signs that said "Not 1 More Cent" to protest the Internet-tax bill that they considered a tax increase.

The House's position on the bill was that use tax is already collected—so it's not technically a new tax. It's a tax consumers are not reporting on their tax returns, unintentionally gaming the system. True. Technically, the bill is not "constitutional" in that the U.S. Supreme Court has not reversed its 1992 ruling, but as any Mississippian knows, the Constitution is bent and shaped to fit certain political needs in this state.

For Reeves to help institute the largest tax cut in recent history one session (remember the Taxpayer Pay Raise Act from 2016?) and then dispose of an attempt that even our Dixie neighbor Alabama is working on in the name of constitutionality is hypocritical and downright insulting. You cannot offer tax cuts, expect to adequately fund education and crumbling infrastructure, and then reject proposals like House Bill 480 without admitting your end-game goal. Reeves' inaction on this bill proves at least one side of the statehouse's intention: to drown state government in a conservative bathtub. The problem is, it won't end well for Mississippians.