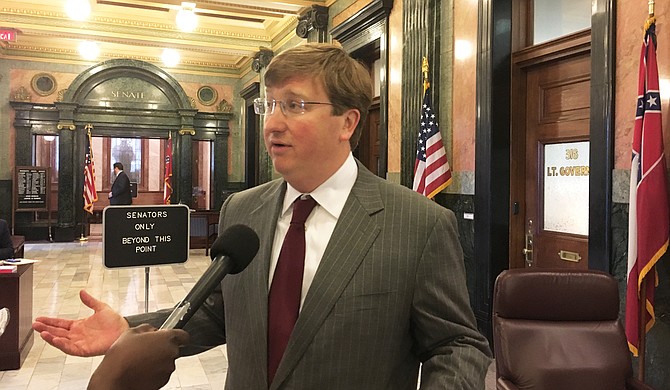 Lawmakers staged a showdown in the Capitol last night over money for roads and bridges, as the Mississippi Senate and the House of Representatives stayed in session until midnight on budget deadline day. The stand-off came after the House members voted to send back Mississippi Department of Transportation budget bills to conference to force the Senate to work with them to increase funding for needed repairs—which still hang in the balance today.

Lt. Gov. Tate Reeves was not amicable to the idea of entertaining the House's proposal, which the Senate has rejected several times this session. Ultimately, House leaders of both parties forced the Senate's hand—meaning a special session is necessary to deal with infrastructure funding in the state.

On Monday afternoon, Rep. Charles Busby, R-Pascagoula, took the podium and asked the House to send the transportation budget bill back to conference, signaling the House's intention to add extra funding for roads and bridges, through Internet sales taxes—also called use taxes—currently collected.

"There's a lot of give and take in politics, and some people seem more intent on always taking and never doing the giving," Busby told the House.

The House responded in an unusual show of solidarity, with all members voting in favor of sending the MDOT budget bill back again. As the vote board lit up green, members cheered and clapped, signaling a bi-partisan middle finger to the Senate, forcing it to either work with the House on funding for roads and bridges—or kill MDOT's budget due to inaction.

Lt. Gov. Tate Reeves was not pleased by the House mutiny, holding a short press briefing after the House's move, and told reporters that the bill was not about special projects but instead about the Internet sales tax.

"They so badly want to raise the Internet sales tax that they're willing to blow up a budget agreement that they agreed to," Reeves told reporters. Senators volleyed the same budget language back to House members, Reeves said, and he tried to place the ownership for passing the budget back in the hands of fellow GOP members in the other chamber.

"House Republicans are going to have to decide if ... unconstitutionally raising taxes is important enough to them to go against an agreement that they made," Reeves said.

After the 6 p.m. deadline passed, and the House did not act on the MDOT budget, House Speaker Philip Gunn, R-Clinton, held a press conference in his office with key GOP lawmakers responsible for the House's push for infrastructure funding.

Gunn debunked the idea that the House's proposal was "unconstitutional." The new language to provide funds for roads and bridges, most recently in Senate Bill 2939, would divert "use tax revenue above the first $50 million collected from voluntary taxpayers and deposited into the State General Fund."

Amazon and some other online retailers, with no brick-and-mortar location in the state, already collect use tax, also called Internet sales tax, and give it to the Department of Revenue. Litigation to require all retailers to collect the tax could get to the U.S. Supreme Court in coming years, and House lawmakers added language in the bill to conform to state law if federal law on use tax changes.

Until then, however, Rep. Jason White, R-West, pointed out, "we are getting the money now, and we're going to get more."

White, Rep. Trey Lamar, R-Senatobia, and Rep. Charles Busby, R-Pascagoula, were all in Gunn's office to express frustration with the Senate not considering or sitting down to meet and talk about solutions to funding infrastructure.

"Policy we strongly support ought to be given due diligence at the other end of the hall," Busby said.

The MDOT budget bills died at 6 p.m., and the Senate called up a resolution to suspend the rules and allow both chambers to take up both transportation budget bills again. The House never took up the Senate's resolution before midnight, letting the budget bill stay dead.

Gunn defended the House's decision to push road and bridges funding to a special session. "The idea that 'the House wants to increase taxes' is not true; we are trying to devote time and attention to funding roads and bridges," Gunn told reporters. "We were willing to do that (force a special session) for the purpose of exploring other avenues."

Gunn said that holding a special session would not be an increased cost to taxpayers because lawmakers have skipped several Fridays this session—which saved costs that can pay for the special session.

The attorney general's budget also died due to last-minute changes Rep. David Baria, D-Bay St. Louis, pointed out. The House used its own rule to change the conference report late Monday, and sent a resolution to the Senate asking it to amend the budget bill. Baria objected to a section in the bill that would require the attorney general to deposit settlement funds into the state's general fund within 15 days in order to receive any state funding at all. Senate Democrats had opposed the amendment earlier that evening.

The Senate did not take up the House's resolution before midnight, and from 8:30 p.m. until midnight the House and Senate stayed in recess in a stand-off that resulted in three dead budget bills.