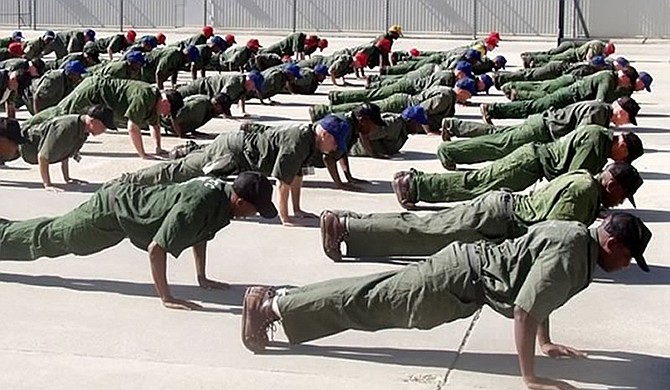 The Mississippi Department of Corrections has replaced the Regimented Inmate Discipline program, a paramilitary-style program designed to reduce rates of re-offending. The program was found to hurt more than help, and MDOC introduced the replacement program this summer. Photo courtesy MDOC

JACKSON — Mississippians who receive earned probation for crimes that do not carry a death sentence or involve deadly weapons will now have access to high-school equivalency education, alcohol and drug counseling, re-entry and employment services—and perhaps, most importantly, "Thinking for a Change," an evidence-based cognitive behavioral-therapy program.

Cognitive behavioral therapy is focused on helping individuals understand the connections among thoughts, feelings and behaviors. Inmates in MDOC's custody who are sentenced to Mississippi Department of Corrections' new Recidivism Reduction Program will attend therapy twice a week in addition to their other classes.

Pelicia Hall, the MDOC chief of staff, told Mississippi lawmakers on the Performance Based Budgeting Committee on Sept. 21 that RRP started July 1 at South Mississippi Correctional Institution in Leakesville for male offenders and the Flowood Satellite Facility for female offenders. All those in the Regimented Inmate Discipline program it replaced shifted over to the alternative. The department also is rolling out community-based options in work centers throughout the state and partnering with the Department of Mental Health to implement a second chance program.

Hall told the Performance Based Budgeting Committee that 25 detainees were participating as of Sept. 20—but the court had only recently sentenced two of those to RRP. The strategy, while mandatory for MDOC to offer, is optional for the courts. Judges can sentence individuals to the program who have been in the state's custody up to one year.

"It's going to be a referral-based program whereby the probation and parole agent, after assessing the risks and needs of an offender, would make a referral to a program coordinator," Hall told lawmakers Sept. 21.

Adrian James mainly works with juveniles and their families as a counselor at Pine Belt Mental Healthcare in Hattiesburg and has experience with cognitive behavioral therapy. She says it likely can help inmates understand how they got to the point in their lives where they were on earned probation.

"We aren't born and then go out (and commit crimes); what happened between then and now?" James said. "What things were you exposed to? What things happened to you, or in your home?"

The National Institute of Corrections developed the "Thinking for a Change" curriculum in the 1990s. Dr. Juliana Taymans, a special-education professor at George Washington University, helped develop and write the program's curriculum.

Taymans said "Thinking for a Change" focuses on three steps: social skills, cognitive self-change (how change in thoughts affect situations) and problem-solving. Inmates will practice their new skills in groups and then practice outside the groups. The whole course should take 25 to 30 two-hour sessions to finish 25 lessons, Taymans said.

"It's taught in a way so that there's no lecturing or moralizing or sermonizing, we're not telling them we're going to make you better," Taymans said. "The way it's taught is, 'OK, we're going to explore a whole bunch of skills that are useful to you in your life, so let's see if you can use them.'"

At capacity, RRP should serve up to 100 people, but the National Institute of Corrections mandates that classroom sizes be kept low, at about 15 to 20 people. Thinking for a Change therapy classes are offered to inmates on Thursdays and Fridays every week for 13 weeks. The RRP program lasts six months, in total.

Getting Rid of RID

MDOC had to replace the paramilitary program because inmates who went through the program actually fared worse than those that didn't, Dr. Kirby Arinder, a methodologist from the Legislature's non-partisan PEER Committee, told lawmakers in September. He said that Regimented Inmate Discipline program "has a statistically significant negative affect on recidivism."

"(We found that) people who go through actually do worse than people that didn't go through, so we realized that while there were a lot of individuals who had success—they were the outliers," Arinder said.

Back in 2015, the PEER committee recommendations led the Legislature to pass House Bill 906 in 2015, repealing the paramilitary program because it did not stop participants from later committing more crimes. 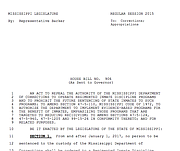 "The research had developed and shown that the boot camp and military disciplinary measures were not working and didn't help for recidivism purposes, so we had to develop an evidence-based model to replace that component of the program," Hall told the committee in September.

Not everyone was quick to embrace the change. Patricia Burchell, the Forrest County district attorney and president of the state's prosecutors association, told lawmakers that prosecutors fought hard to keep RID.

"I don't know about what the statistics show, but we in our jurisdictions felt that it did help the offenders that we sent there, so we were not fully on board with the replacement. Now that it is reality of course, we're going to use it fully," Burchell told the Performance Based Budgeting Committee in September.

The statistics show that the program was horrendous in terms of the number of participants who later re-offended. In 2011, RID had a 42-percent recidivism rate, while the state's overall rate hovered around 37 percent. This means that of the 427 inmates who completed the RID program, 179 of those graduates were back in the system within three years.