Inmates Graduating and 'Thinking for a Change' 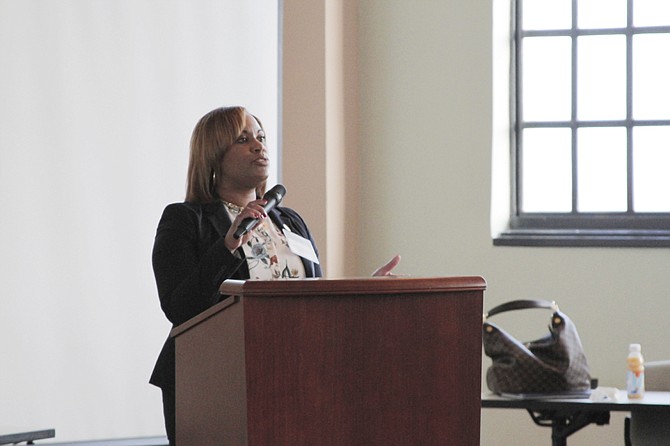 The Mississippi Department of Corrections, led by Pelicia Hall (pictured), hosted the first graduation for Hinds County inmates from the "Thinking for a Change" program. Photo by Arielle Dreher.

JACKSON — Forty-two men and women from the Hinds County Probation and Parole Office and the Hinds County Restitution Center graduated from the Mississippi Department of Correction's re-vamped recidivism program on June 29.

The program, called "Thinking for a Change," replaced a military-style recidivism program the department ran before data proved the program to be counter-productive for repeat offenders. The program is a group-based model, and inmates were placed in groups of no more than 15 participants. For two months, they met twice a week to talk and learn about social and behavioral skills.

Desmond Brown graduated on Thursday from the program. He was charged with possession of narcotics and is on non-adjudicated probation, he said. His probation officer recommended him for the program, which he was at first hesitant to join.

"I thought to myself that this wasn't going to be for me, but as the class went along we started to get to know each other ... and I started to like it," he told the Jackson Free Press.

Brown was one of the graduation speakers at the program Thursday. He said by the third week of the program, his group got comfortable and started sharing more personal things with one another. Two or three facilitators, trained in the evidence-based curriculum, help lead the group, and Brown said everyone had a chance to speak and share what was going on in their lives.

"You know how you'll be in the streets and you'll be in a group of fellas who want to do something bad or illegal...that's the type of class it was, it taught us to stop and think before we act," Brown said.  MDOC has implemented the program around the state, but Thursday's graduation marked the first group from Hinds County to go through the new program.

"Programs like these are vitally important in helping the Mississippi Department of Corrections fulfill its mission to provide effective post-release supervision for offenders," Commissioner Pelicia E. Hall said in a press release. "I am committed to progressively moving MDOC forward by offering more programs like this. Having more cognitive behavioral therapy in our treatment and rehabilitation programs will help offenders to make better choices."

Brown said his favorite part of the program was how his group connected and still hangs out even after graduation. Brown, who is 20 years old, has two more years on non-adjudicated probation. The program encourages inmates to pursue jobs or education, and Brown said he plans on going to community college.

During the program, 85 percent of the men and women who participated found jobs or enrolled in education programs, an MDOC press release says.