How Deaf Kids Learn in Mississippi 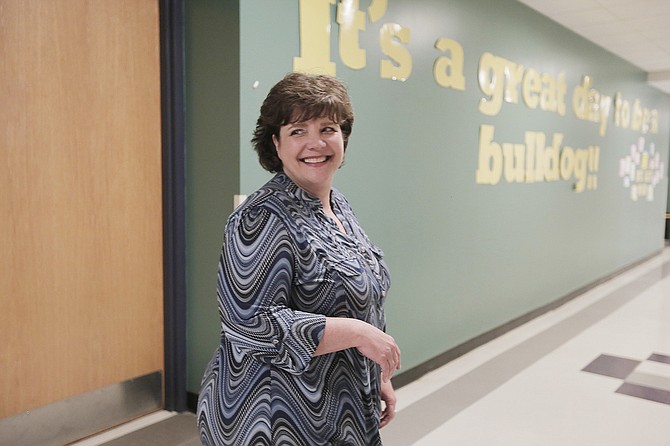 Dr. Sandra Edwards, superintendent at the Mississippi School for the Deaf, is a CODA, or “child of a deaf adult.” She says she knew American Sign Language, or ASL, before she spoke out loud. Photo by Imani Khayyam.

JACKSON — Two days before graduation at the Mississippi School for the Deaf, the 10 seniors are on their class trip to Dallas, and the elementary school is having its awards day program. The rest of the student body does what any other school does in the festive penultimate days of an academically rigorous school year: winds down. In Mrs. Peterson's classroom, an educational film about big cats splashes across the projector screen. The captions at the bottom of the screen describe the demise of an antelope in the jaws of a cheetah.

The Mississippi School for the Deaf is the only school in the state that exists primarily to serve deaf children. To do it well isn't cheap.

The school has both commuter and residential students, and though boarding there is not a requirement, 80 percent of students, some as young as four, may use the dorm services at some point during the school year, so the school must operate 24 hours, six days a week. Children eat three meals and two snacks a day, and are supervised by a host of adults who perform distinct but critical roles: not only teachers, but also full-time audiologists, nurses, as well as residential parents who supervise students living in dorms from 3:30 p.m. until 8 the next morning. Students do not pay tuition to attend MSD.

The cuts endanger the school's unique mission of equipping its students with the language skills and self-advocacy that enriches their Deaf identity, the school's administrators and teachers say. These skills are necessary in the larger hearing world that might fail to provide adequately for them, as well as discriminate against them.

MSD sprawls across 88 acres of land in north Jackson, Dr. Sandra Edwards, superintendent and a former principal and teacher at the school says.

Edwards' hands somersault into shapes as she speaks, her words and hands moving together to communicate what she calls "conceptually correct" English, as it's impossible to speak English and sign ASL at the same time.

It is school policy to sign as you speak to hearing people so that deaf students can learn and participate in the conversation if they choose, Edwards says.

As a CODA, or child of a deaf adult—her father who was a 1961 graduate of MSD—Edwards learned ASL before she knew English. "I signed before I spoke," she said.

The elementary-school floor is covered with thick black wax. Superintendent Dr. Sandra Edwards says she would like to see it replaced with carpet.

MSD is a bilingual school, meaning that students are taught English and ASL. Some students know Spanish and Mandarin Chinese—and Mexican and Chinese Sign Language, among other languages, Edwards says.

"There are lots of myths related to bilingual education. One is that ASL is not a language, that it is almost a broken English, or is just putting signs on your hands in English word order, but that's not the case," Edwards said. "The actual word order of ASL is not the same as the grammatical structure of English, so they're two different languages."

At MSD, students participate in oracy and signancy labs, where they develop spoken English and ASL skills, respectively. They're "mirror labs," meaning the curriculum matches in each room.

"If you go into the oracy lab to learn about community helpers, for example, then you're going to hear what sirens sound like (for students with some hearing ability) and speak the names of different helpers; fireman, policeman, doctor, nurse (and) ambulance, all those words are done through spoken English and sound in the oracy lab," Edwards explained.

"Then you go into the signancy lab, and you're doing the same lesson, but in ASL—the signs, and how to identify the colors (associated with each)," she continued. "We want them to have everything in their toolkit. We don't want them to have just ASL or just English or just reading or just writing."

Though MSD's bilingual approach has been successful, stigmas against ASL have persisted for centuries, when people dismissed the language as inferior to vocalization and encouraged lip-reading, and speech, if possible, for students to function in the hearing world.

"Most people think language equals speech," said Dr. Tom Humphries, associate professor of education at University of California, San Diego. Humphries says this attitude toward language didn't see challenge until the 1980s, but that even today, people believe oral speech is the primary way for a child to develop language-—despite, he says, 40 years of linguistic study demonstrating how signed languages are languages acquired by children in the same way as spoken ones.

"That's how it impacts education—many educators and their trainers don't believe and have never really explored how signed languages have value in teaching and learning. So the situation you have in this country is that there are strong vested interests (financial and professional) in perpetuating this belief that signed languages are not helpful in education," Humphries said.

Humphries says doctors, audiologists and speech therapists contribute particularly in excluding signed languages from the lives of deaf children, and thus their education. "It's no wonder, then, that parents who have a deaf child and reach out encounter these attitudes and are told, sometimes quite strongly, that they must not sign or educate their children in sign," he said. "And parents are all too receptive to this because they want their children to be restored or grow up as much like them as possible."

Since a 1997 law passed, all Mississippi newborns receive a universal hearing screening; the Mississippi Department of Health says between 70 to 90 babies are born in the state each year with hearing loss, or develop it soon after birth. MSD serves those children, too, with its SKI*HI early intervention program, which includes 125 students.

Parents of deaf babies and toddlers, birth to 4, all over the state receive at-home educational services from auditory specialists who help equip parents, most able to hear themselves but with no practice in sign language, with the tools to help their young children acquire language at an early age.

The rest of MSD's 238 children are K-12 students. From 2010 to 2012, the average age of enrollment at the school was 14, Edwards said, but now the increase from the birth to 4 program means that the average is lower. She says that being language-deprived for so long can be extremely emotionally taxing for older children once they arrive at the school.

"I tell them, 'It is OK for you to be angry,'" teacher Gale Hartling says about her language-deprived students in her classrooms when their frustrations come to a head. Language deprivation has devastating effects on children, but Hartling says that sign language and teaching are the easy parts of her job; it's not "fixing" students, it's teaching them.

"They're not broken," she said.

Communication is not the only important skill taught at MSD. The school stresses the need for students to be able to advocate for themselves.

Edwards says it's easier to do this the earlier children arrive at the school; from there, they can start to build their own Deaf identity. Half the faculty, including principal Dr. Bradley Porche, is deaf, while 100 percent of the student body is deaf. Edwards says some of the older students are surprised to see and communicate with so many people like them; when they come from another school, often they were the only deaf student.

Edwards says the Deaf adults at the school inspire her students. "They see my staff, and they think, 'Oh, I can be teacher. I can have a PhD, too,'" she said.

But preparing their students for the less Deaf-inclusive hearing world is a priority at the MSD, too. Deaf advocates say deaf people can be targets of audism, discrimination against deaf people, when people doubt their intelligence and competence or fail to make accommodations for them. They say this discrimination can exclude them from job markets and even threaten their safety.

The Mississippi faction of the Deaf Grassroots Movement, founded to end job and education discrimination against deaf people, took to the Capitol building in Jackson in May to speak out against police brutality and economic inequalities for deaf individuals.

Jim Bishop, a Deaf Mississippi native and Deaf rights advocate, says that Deaf people are just as capable as anyone else to work in white-collar jobs.

He is confident in the ability of deaf individuals to offer as much to the workplace as any hearing person. There's nothing wrong with them—they just can't hear. "You don't need to be able to hear to work," he said.

Still, it takes money to be able to prepare students for the hearing world, and having the best school environment possible helps achieve that goal. Edwards says she would like to tear down one outdated building on campus, and replace the heavy black wax floor in the elementary school building with carpeting. But like all schools, Edwards says, they take the cuts as they come and work to the best of their ability to help students thrive.

A previous version of this story said the Deaf Grassroots Movement rally occurred in April. It was in May. We apologize for this error.