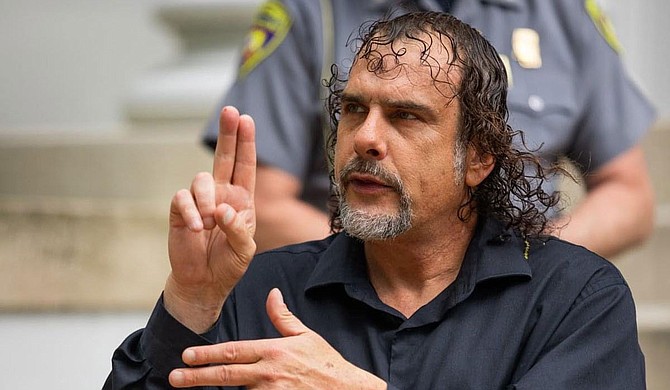 Greg Goldman has been signing since he was 2 years old. His father is deaf, and his mother is an interpreter, so Goldman is in a rare position within the deaf community—he is fluent in both spoken English and American Sign Language, and can translate between them.

Just like in any language, American Sign Language implements elements such as nouns, verbs, syntax and grammar, although these elements may be used differently than in spoken English, as ASL is more conceptual.

"Where a hearing person might say, 'I need to go to the auto mechanic next week and get my transmission fixed,' a deaf person would probably just sign 'need broken car fix,'" Goldman says. "They're two completely different languages."

A professional sign-language interpreter since the age of 19, Goldman also worked as a dorm parent at Mississippi School for the Deaf and enjoyed a 20-year career at the Mississippi Department of Rehabilitation Services. After retiring in 2017, he opened Goldman Interpreting Services. He now teaches classes and interprets full-time. "This is a challenging job," Goldman says. "Not everyone can get up there in front of a crowd and do it."

Interpreters work everywhere throughout Mississippi including hospitals, doctors' offices and courtrooms. Being a child of a deaf adult, otherwise known as "CODA," and his long history with the deaf community confer credibility and afford Goldman access to the nearly 3,000 signing deaf Mississippians.

"This is a serious relationship for us," he explains. "An (ASL) interpreter has to be trusted, skillful and knowledgeable enough to give the correct information."

Starting with Hurricane Katrina in 2005, Goldman has interpreted televised press conferences for many statewide disasters.

The pandemic has pushed interpreters to adapt to the changing terminology of the pandemic—and Goldman is an ever-present fixture during Gov. Tate Reeves' COVID-19 press briefings.

"(ASL) is a living, constantly evolving language," Goldman says, noting that the virus has affected how easily he is able to communicate with those who are deaf. "COVID has really interrupted the deaf world," Goldman concludes. "Wearing a mask makes it impossible for some deaf people to read my lips, and it cuts down on seeing my expressions."

CORRECTION: In the originally published version of this article, a paragraph suggested that adjectives, adverbs, grammar and syntax are unnecessary within ASL. This statement was incorrect, and the paragraph in question has since been corrected for precision. The Jackson Free Press apologizes to practitioners of ASL and other readers who may have been offended by the mistake.