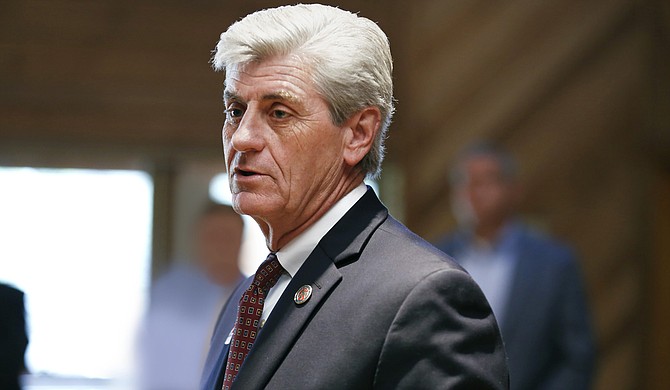 During the Watchmen on the Wall pastor conference in Washington D.C., the Family Research Council's president, Tony Perkins, presented Bryant with the award on May 26, praising the passage of the Mississippi's 2014 Religious Freedom Act, and most recently, House Bill 1523.

"Targeted by those who wish to advance a radical social agenda, Governor Bryant has stood firm and unequivocal in defending religious liberty for the citizens of Mississippi," Perkins said while introducing the governor.

Gov. Bryant told the audience that the award was not his to accept, but it was an award for the "brave members of the House and the Senate in Mississippi" who helped pass the "Protecting Freedom of Conscience from Government Discrimination Act."

"I remember reporters were asking me as I was walking down a hallway just after it (HB1523) was passed; 'Surely he's not going to sign that bill' (they thought), just as soon as it gets to my desk," Bryant said. "I will tell you, there is some joy in letting them know that we are not afraid; we will not be intimidated, that we will not go quietly into the night."

Bryant said that the Lord has given him great opportunities, including being the governor, but that the Lord also gave him great challenges in the midst of signing HB 1523.

"About 60 days ago, it seemed as if all of the secular, progressive world had decided that they were going to pour their anger and their frustration, their friends in the media willingly joining with them, to bring all that they could upon the governor of the state," Bryant said.

"How dare them. How dare them to believe that somehow this radical idea that the left now has about our religious freedoms, that somehow they should be taken away from us? It is equal to those that fought in the dark days of the segregation movement, who gave their very lives, who were assassinated in their front yards, whose churches were blown up, whose children were killed."

There are two legal challenges to House Bill 1523 filed in federal court in Mississippi. The ACLU has filed a lawsuit against the state's registrar of vital records, saying that House Bill 1523 violates the Fourteenth Amendment, saying it creates a "separate and unequal set of laws applying only to the marriages of same-sex couples." 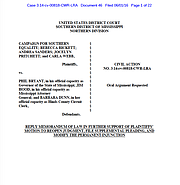 In a June 1 brief, the plaintiffs argue that House Bill 1523 does not include any assurance that same-sex couples will be able to acquire marriage licenses "without any impediment or delay" based on the law that will go into affect on July 1.

"There is absolutely no remedy under Mississippi state law permitting that couple to exercise their fundamental right to marry on the same terms as any other couple, without any impediment or delay," the brief states. "Thus, this case presents precisely the types of "extraordinary circumstances" that warrant the relatively modest relief sought here requiring state officials to provide Plaintiffs and this Court with necessary information about recusals and alternative arrangements put in place to protect gay Mississippians' constitutional rights."

The plaintiffs are not adding a new claim to the initial case, which was closed once same-sex marriage was legalized nationally last summer with the U.S. Supreme Court ruling in Obergefell v. Hodges. The brief states that HB 1523 directly "interferes" with the same rights that the plaintiffs sought in the original complaint.

"The State of Mississippi cannot be permitted to constantly erect new legal barriers—such as HB 1523—to chip away at the constitutional rights of gay and lesbian Mississippians that have already been recognized by the federal courts," the brief states. "By creating a segregated system of marriage licensing, it frustrates for gay and lesbian couples their fundamental right to marry that was recognized by this and many other courts."

Attorney General Jim Hood, defending the governor, himself and former Hinds County Circuit Clerk Barbara Dunn, disagrees. The state does not believe that the case should be reopened. 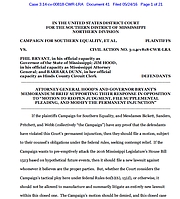 In their May 24 response, the state said, "If the Campaign wants to pre-emptively attack the 2016 Mississippi Legislature's House Bill 1523 based on hypothetical future events, then it should file a new lawsuit against whomever it believes are the proper parties."

Their brief defends HB 1523, saying it "effectively amends Mississippi County Circuit Clerks' Office's marriage licensing obligations under state law by specifying conditions under which a clerk's employee may recuse himself or herself from authorizing or licensing marriages."

U.S. District Judge Carlton Reeves has not weighed in on the recent filings in the case.