What the ‘Bryant Documents’ Say About HB 1523, Its Future 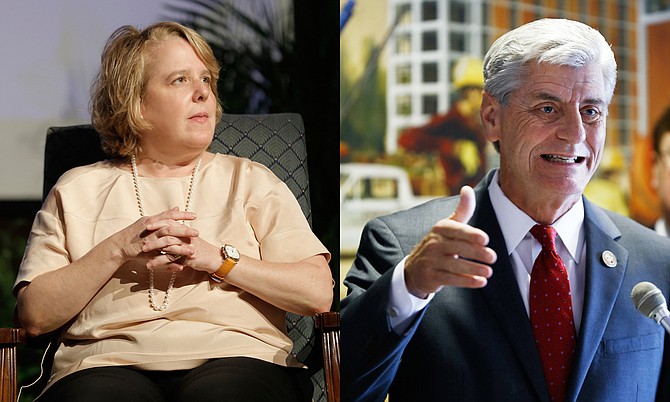 The Alliance Defending Freedom is representing Gov. Phil Bryant (right), who has appealed the House Bill 1523 case to the 5th U.S. Circuit Court of Appeals. Attorney Roberta Kaplan (left) revealed ADF’s influence on HB 1523 via a records request for the governor’s emails about the law. Photo by Imani Khayyam.

Gov. Phil Bryant and the executive director at the Mississippi Department of Human Services have asked Judge Reeves to stay his injunction against the law going in effect, as well as filed appeals in the 5th U.S. Circuit Court of Appeals.

When Attorney General Jim Hood announced that he would not appeal HB 1523 or use taxpayer dollars to do so, Bryant announced on Facebook, "I have engaged nationally recognized appellate attorneys, at no cost to the taxpayers of Mississippi, to appeal the district court's ruling."

ADF will serve as that co-counsel, defending the governor in the 5th Circuit, Greg Scott, vice president of communications with ADF, told the Jackson Free Press via email. The legal fees will not cost taxpayers any money because ADF, a national legal organization that advocates for "the right of people to freely live out their faith," according to its website, represents its clients at no cost.

A group of Christian leaders, including James Dobson of Focus on the Family and Donald Wildmon of the American Family Association in Tupelo, helped found ADF in 1994. Former Judge Charles Pickering in Mississippi is on its board. The group's key issue areas are "religious freedom, sanctity of life, and marriage and family." The alliance litigates cases dealing with "religious freedom" and is currently asking the U.S. Supreme Court to hear a Colorado cakeshop owner's case, who refused to bake a wedding cake for a same-sex couple due to his faith. 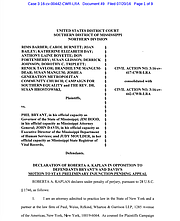 The organization also helped, at least in part, influence the language of the "Freedom of Conscience from Government Discrimination Act," or HB 1523, emails between the governor and ADF employees show.

In a court filing last Wednesday, Roberta Kaplan, one of the lawyers representing plaintiffs in the case, revealed numerous emails, dubbed the "Bryant Documents" in her brief, that show ADF and other religious groups' influence on HB 1523's language and marketing.

"I think these documents are relevant because even though we got them after the two-day hearing before Judge Reeves, it's pretty clear that they completely corroborate almost everything that we said at the hearing," Kaplan told the Jackson Free Press last week.

Judge Reeves asked plaintiffs if HB 1523 was based on model legislation. The answer came in a public-records request Kaplan had filed with Gov. Phil Bryant's office asking for any emails "between the office of Mississippi Governor Phil Bryant and the Alliance Defending Freedom ("ADF"), the American Family Association ("AFA"), and any other individual, organization, or entity that assisted in the drafting of or advised on HB 1523."

Kaplan says in her brief that the emails and documents in the governor's response to the request "completely corroborate the substance of Professor Douglas NeJaime's expert testimony that HB 1523 was drafted by the ADF, was promoted by the ADF and other conservative Christian groups, and that, as a result, HB 1523 improperly and unconstitutionally reflects the sectarian Christian values of these organizations."

Emails between Alliance Defending Freedom staff and Gov. Bryant's staff reveal that HB 1523 was based, at least in part, on a model executive order ADF sent to Bryant's office back in June 2015.

In an email to Drew Snyder and Jim Campbell in Bryant's office, an Alliance Defending Freedom counselor sent model executive orders "that would prevent state governments from discriminating against their citizens because of their views about or actions concerning marriage."

The email with the executive order draft policy was sent on June 24, 2015, just days before the U.S. Supreme Court ruled in the Obergefell case that same-sex marriage should be recognized nationally.

The language used in the model executive orders looks very similar to House Bill 1523, including the three specific definitions of a religious belief or moral conviction used to support the whole bill.

Section 1 of the model policy states that: "Notwithstanding any Order to the contrary, the State Government is prohibited form taking any action inconsistent with the restrictions placed upon the State Government by the United States constitution [or] the [STATE] constitution [or State RFRA], or any state law, against a person wholly or partially on the basis that such person believes or sincerely acts in accordance with a religious belief or moral conviction that: (1) marriage is or should be recognized as the union of one man and one woman; (2) sexual relations are properly reserved to such a marriage; or (3) male (man) or female (woman) refer to an individual's immutable biological sex as objectively determined by anatomy and genetics by time of birth."

Emails from March 31, 2016, show that representatives from the Alliance Defending Freedom offered to help the governor's office "from a PR/messaging/support perspective" before he signed the bill. ADF personnel also sent Bryant two different drafts for his HB 1523 signing speech.

Kaplan's brief reveals that other groups including several Christian foster-care and adoption services groups, Mississippi chapters of the Catholic Diocese, the United Pentecostal Church, and the Southern Baptist Ethics and Religious Liberty Commission all wrote letters of support of House Bill 1523.

Kaplan's public-records request also revealed some businesses expressing displeasure for the bill. The president of software company, Pilot ERP Software, wrote an email to the Mississippi Development Authority, saying the company would no longer authorize travel to Mississippi or purchase good or services from Mississippi-based vendors, due to the passage of HB 1523.