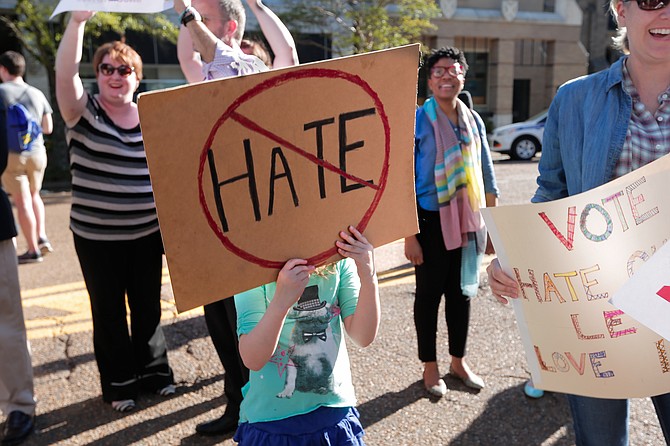 Despite protests and a lower court ruling House Bill 1523 unconstitutional, the law went into effect this week, and plaintiffs have asked the U.S. Supreme Court for relief. Photo by Imani Khayyam.

The "Protecting Freedom of Conscience from Government Discrimination" Act is state law in Mississippi, after the 5th U.S. Circuit Court of Appeals denied the request of plaintiffs in the Barber v. Bryant lawsuit to block it while they appeal to the U.S. Supreme Court.

House Bill 1523 says the state government will "not discriminate" against businesses or individuals who refuse service or speak out according to their "sincerely held religious belief or moral conviction" that marriage is between a man and a woman, sex relations are reserved for such a marriage and the terms "male" or "female" refers to the biological sex assigned at birth. 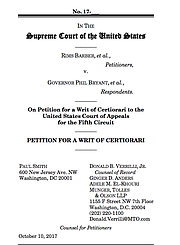 GLAAD, the national advocacy organization for LGBT representation in media, released a statement from its president, too.

"America was founded on the freedom of religion and this shared value continues to be critical to our nation's success, but it does not give people the right to impose their beliefs on others, to harm others, or to discriminate," said Sarah Kate Ellis, President and CEO of GLAAD.

The Williams Institute at the UCLA School of Law estimates that Mississippi is home to 60,000 LGBT adults and more than 11,000 transgender youth and adults. The state also has the highest rate of same-sex couples raising children.

Attorneys representing the plaintiffs in the Barber v. Bryant case, which challenged the constitutionality of HB 1523 in the first place, asked the U.S. Supreme Court to review the case this week. The petition shows how HB 1523 was Mississippi lawmakers' response to the U.S. Supreme Court's ruling in the Obergefell case, which legalized same-sex marriage nationally. The 5th Circuit has only ruled that the plaintiffs did not have standing—without touching whether or not the rest of the legislation is constitutional or not.

"The standing question is an important and recurring one: in the wake of Obergefell, many other state legislatures have introduced similar proposals intended to privilege religiously motivated refusals to serve same-sex couples and transgender individuals," the petition says. "The court of appeals' decision will likely embolden still others."

"The United States has a long history of providing conscience protections in the regulation of health care for entities and individuals with objections based on religious beliefs or moral convictions," the unpublished IRS rule change says. "These interim final rules expand exemptions to protect moral convictions for certain entities and individuals whose health plans are subject to a mandate of contraceptive coverage through guidance issued pursuant to the Patient Protection and Affordable Care Act."

The IRS contraceptive rule change will be published on Friday, Oct. 13.

The Alliance Defending Freedom, a conservative legal advocacy organization, helped influence the language and writing of HB 1523, as well as defended Gov. Phil Bryant in his appeal to the 5th Circuit after U.S. District Judge Carlton Reeves ruled the legislation unconstitutional. The U.S. Supreme Court is scheduled to hear arguments in another ADF case, Masterpiece Cakeshop v. Colorado Civil Rights Commission, in December. The plaintiff is a cake baker maintains he is allowed to refuse to bake cakes for same-sex weddings because of his religious beliefs.