Southern Airways Comes to Jackson, Stallworth Pushed Out of Lawsuit 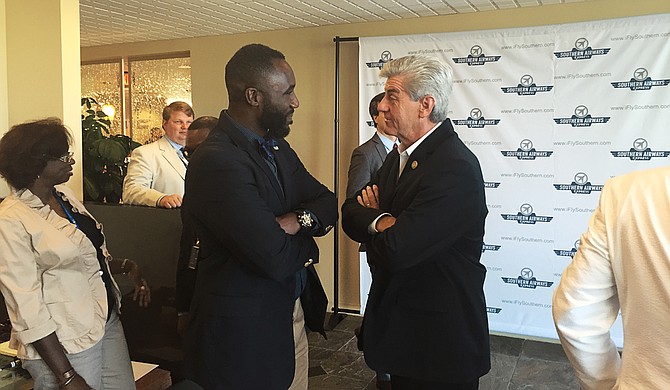 Jackson Mayor Tony Yarber (left) and Gov. Phil Bryant (right) both mentioned the "momentum" that the addition of a new air service to the Jackson-Medgar Wiley Evers International Airport means to the Jackson metro area. Photo by Tim Summers Jr.. 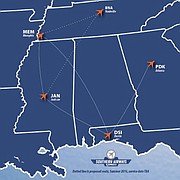 "Every good state has an airline," Bryant said. "Now there are good states that don't, but the most successful ones have an airline, and we have one right here in Mississippi."

The small Southaven-based business, Southern Airways Express, has shifted its operations in the area from the small Madison airport to Jackson, CEO Stan Little told assembled media in the Atlantic Aviation executive terminal this morning.

"As some of you know, we have been a Mississippi-based airline for almost four years now," Little said. "I met with the governor back in 2013, and he emphasized the need here for more air travel out of Jackson and out of the rest of the state and connecting parts of the state."

Little said that the move comes after discussions with the local business community, including banks and law firms, about their needs for a regional operator.

"We are pleased today to announce that after much looking at the numbers that we are going to announce Jackson to Nashville, Tennessee, service," Little said. "We are going to connect these two states capitals, which are huge in business in their respective states."

The Jackson hub, which will operate out of the Atlantic terminal, will provide service to Memphis, Tenn., and Destin, Fla., as well as Nashville, employing smaller planes that have a maximum capacity of nine passengers.

The 38-foot Cessna 208 Caravan airplane that will do most of the work for the company sat behind the terminal; the large cargo areas underneath the leather passenger seats are evidence of the plane's former role as a FedEx cargo runner. The trip to Memphis is estimated to take around 45 minutes from Jackson, and one of the pilots for Southern, Capt. Paul Hooper, said each passenger is encouraged to keep their luggage at around 70 pounds.

Bryant leaned on the critical role of being able to fly prospective business partners in and out of Jackson for economic development in the Jackson metro.

"This is important because the business opportunities that we have dealing with Nashville and Memphis and Destin will increase not only for those in the tourist industry but economic-development opportunities," Bryant said. "Businessmen and women that have opportunities to share their business success from Florida to Tennessee and other states with Mississippi."

"Thank you so much for considering the capital city and understanding that Jackson, Mississippi, is indeed the heartbeat of the state, and as the capital we have to provide opportunities for economic development, for a high quality of life," Yarber said.

Yarber, echoing the tagline from his recent "State of the City" speech, said the addition to the airport pointed to Jackson's "momentum."

"That's what this is," Yarber said, asking the crowd to repeat "momentum" twice before continuing. "We have been talking about how the City of Jackson is picking up momentum and how opportunities like this scream to the progress that the city is making."

Of course, Yarber and Bryant also represent the two sides of the ongoing lawsuit in federal court over the restructuring and expansion of the Jackson Municipal Airport Authority. Bryant said he believes that the board only adds to the regional representation.

"I think we are adding to the board, we are creating a new board that will have more representation from people in the area of Jackson," Bryant said. "But I think its fair for Madison and Rankin County to have representation on this board. We are trying to be more inclusive in this business environment." 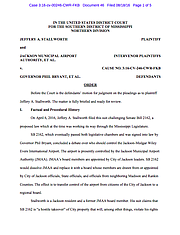 "I think it is a very good day, and the momentum that the mayor talked about is absolutely right. Once you see one carrier come in others will be interested, and I think that these regional carriers is the future for us," Bryant said.

At the moment, the federal lawsuit over the airport has taken a dramatic turn. Presiding federal Judge Carlton Reeves has terminated the original plaintiff, former JMAA commissioner Jeffrey Stallworth, from the proceedings.

"Applying those principles here reveals that Stallworth lacks prudential standing," Reeves said in his order terminating Stallworth's claims on Aug. 18. "He argues that the State's 'taking' of 'his' property without compensation or adequate due process violates the Constitution."

"But the property in question does not belong to Stallworth," Reeves wrote. "It belongs to JMAA and the City of Jackson."

Reeves' order does not terminate Jackson's leaders from their combined complaint by the city council and the mayor.