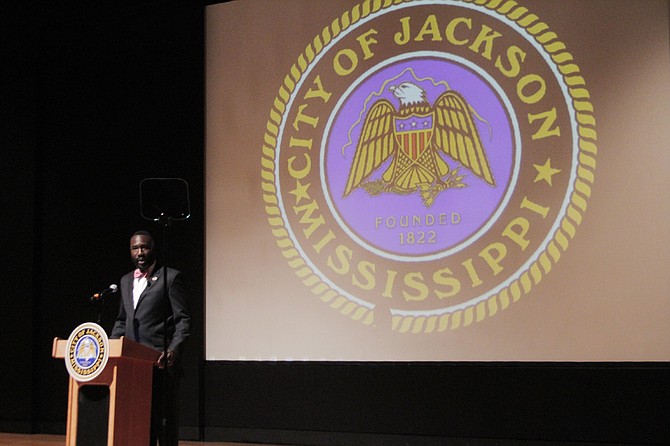 Mayor Tony Yarber urged the need to build on his “momentum” in the coming years during his “State of the City” address on Aug. 2. Photo by Tim Summers Jr..

Mayor Tony Yarber's promise for the City of Jackson centers around the one word he repeated during his "State of the City" address Tuesday night, Aug. 2: momentum.

"We are talking about momentum," Yarber told the audience in the Jackson Convention Complex.

"We are literally talking about this city moving forward."

"And as an administration we inherited this wonderful city in 2015," Yarber said. "It was a time when Jacksonians were terribly concerned with crime taking place in their communities, the state of our infrastructure, the lack of economic development, and not only that, but we were also worried about whether or not this city had the wherewithal to withstand going through four mayors in a matter of a couple of years."

Yarber praised the police department, which remains under-staffed, for its efforts to work against the perception of a growing criminal culture in Jackson.

"We took office when the crime rate was increasing, we've seen a 14-and-a-half-percent decrease for major crimes for 2015, and at the pace that this police department is going, we will see at least a 10-percent decrease this upcoming year. These are real numbers," Yarber said.

"What that means is 3,000 less crimes being committed on the streets of the City of Jackson on the street this year," Yarber said.

Yarber said that although studies recommend that the City should have 500 officers, the 390 officers of the Jackson Police Department are the reason for the "back-to-back decreases in major crimes." The City graduated a new class of 21 officers this month, boosting the number to 418, JPD Chief Lee Vance told WAPT during an interview.

As a part of the reduction in crime, Yarber pointed to the administration's decision to move Community Improvement back into the police department in order to put teeth into dealing with abandoned property.

"It's important to do that because we were able to put enforcement back into the code," Yarber said. "In the past two years, the City has demolished over 215 houses, which is more than we have seen take place in our recent memory. Not to mention the nearly 500 overgrown properties that the City has addressed today."

The City has not paid for all that effort, Yarber said, because the Community Improvement division worked to contact property owners to pay for improving the property, saving the City almost $1.7 million in two years.

Yarber then ticked off a list of projects that he said were the result of efforts between the Public Works Department, the Jackson City Council and the administration. Applause rippled through the crowd as he listed the $1.4-million Eastover waterline project and the $5-million Operation Orange Cone project to fix potholes in all seven wards.

His administration is committed to taking the time to find and institute real improvements, Yarber said, not to rush for political reasons.

"Being politically expedient sometimes means that in our haste to fix the streets, we just throw asphalt down," Yarber said, "but we decided that we wanted to fix our streets and our infrastructure intentionally, with integrity and with transparency."

Ward 1 Councilman Ashby Foote said on Aug. 8 that he is disappointed in the delay between the approval of the projects and the implementation that the public sees.

"That has taken way too long to get stuff from the drawing board to the streets and sewage systems, where the money needs to go," Foote said. "So I am hopeful that we will see more shovel-ready projects being deployed that the citizens can take some confidence in, that will improve the infrastructure situation in the city."

He said he looks forward to "actually seeing some work being done."

The mayor addressed one of the most pressing issues affecting his administration's hopes for re-election: the city's budget crisis.

This talk of the budget is an echo of Yarber's 2015 "State of the City" speech. In July 2015, Yarber warned that the City was "currently facing one of the toughest budget seasons in its history," warning of the consequences for Jackson if it continued to pull from the fund reserves to shore up budget deficits.

This year, the city continued to do the same, leading up to a sliver of the former reserve, measured at a paltry $1.3 million in May.

"We are going to use this momentum to continue the healing process of our budget hemorrhaging," Yarber said. "And as we stated last year our budget issues cannot, they will not be solved overnight."

Yarber said implementation of "priority-based budgeting" that focused on core services in the City, including what he called the "Achilles heel" that is JATRAN, would help begin the financial growth necessary to fix the budget.

"The movement of our priority-based budget is helping the city shape new budget practices," Yarber said. "And for the first time, the City actually has a policy that governs the expenditure of funds. Can you imagine?"

Council President Tyrone Hendrix, of Ward 6, said on Aug. 8 that the lessons of last year's priority-based budgeting process make him curious as to the measurement guidelines for this year.

"I look forward to actually seeing the metrics, and the scores of the priority-based budgeting," Hendrix said. "How do we measure the effectiveness of this program or this project? How do we determine which one of these services are the most important?"

The budget process will begin during the fall, and unlike last year, the city will not be able to lean on a fund reserve to "stop-gap" the spending, Hendrix said. For him, the essential part is the process by which city leaders determine municipal priorities.

"I am really looking forward to seeing that this budget," Hendrix said.

For Yarber, though, the success of Jackson is tied to his ability to continue with the work of the last year and a half and during a re-election year. "We are here today because we believe in the promising future of this city," Yarber said at State of the City. "I am here today because you trusted me and my ability to lead us into that promise."

"I remember the letters, the calls and the constant reminders that I have received over my time as your mayor, every time I'm fighting to keep this momentum going."

Yarber emphasized, at the end of the address, that he wanted to keep the city moving, building on the work of the last year. "And while the city may not have arrived at its destination, yet, I guarantee you that this train is moving. Jackson, Mississippi, is on the move."