Fondren Hotel Projects to Begin in Next Few Months 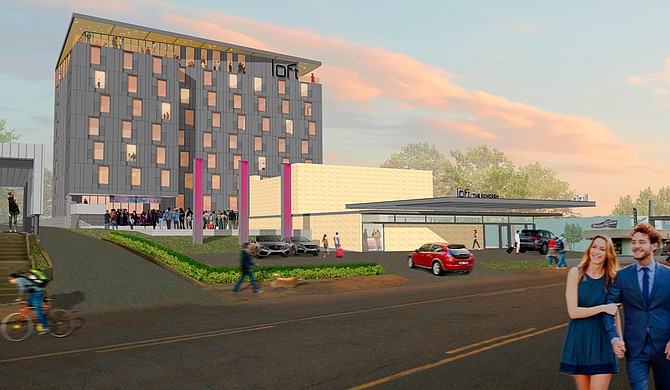 This early rendering of The Fondren hotel depicts the historic Kolb's Cleaners building that will become the front entrance and lobby of the hotel. Photo courtesy Duvall Decker Architects

Two Fondren hotel projects are set to begin work by the summer, representing a combined total investment estimated at around $58 million.

Christiana Sugg of consultant firm Gouras and Associaties appeared before the Jackson City Council last week during a vote to approve $1 million of final TIF funds for the Fondren Place District. Sugg said that both projects are estimated to begin in the next ninety days.

"We are ready to get revenues flowing," Sugg said.

The two hotels will be on parcels of land right off North State Street. The Fondren, a project of Duvall Decker Architects, CDA Hospitality and Eldon Development, will be a nine-story hotel featuring a rooftop bar and 103 rooms. It will use as its lobby and entranceway the historic Kolb's Cleaners building. Roy Decker, a principal on the project, estimated that work would begin in early summer with an expected completion date of 16 to 18 months.

The second hotel, Whitney Place, will be a Hampton Inn hotel located right behind and adjacent to the Pig and Pint restaurant just north of the main Fondren business district. It is a project of the Desai Hotel Group, located in Jackson, and will feature street-level storefront space.

"We will have both pieces of construction kicking off at the same time, within three months," Mayor Tony Yarber said last week.

Ward 3 Councilman Kenneth Stokes said that the development was a good sign for the city and the type of hotels he wants Jackson to attract.

"Now we are trying to bring these name-brand hotels back to our city because it deserves it," Stokes said. He added that some hotels in the city have deteriorated in quality, stating that they are havens for activities like drug use and prostitution. "And they need to take that to Madison and Rankin County because we are not going to tolerate that here."

Ward 4 Councilman De'Keither Stamps said that it was encouraging to see Jackson companies reinvest into the city. "We have to, as Jacksonians, reinvest in our own city as well," Stamps said.

Stamps then suggested that the council look at some of the hotels already in the city, perhaps to convert older ones into a form of more permanent modes of housing.

The mayor pointed to the Fondren development, years in the making, as indicative of an uptick in the economy of the city. "If the sky was falling, then people wouldn't invest $50 million," Yarber said.